This morning, somewhere between Herziliya and Tel Aviv, I began crying on the train. For once, the cause of my frustration was not Israeli public transportation, but rather a series of exchanges on my Facebook feed. The last week has been a true emotional roller coaster, forcing moderates like me to question the value systems of some of my co-religionists, while embracing the hope and forgiveness embodied by others.

When I lived in Mitzpe Yericho, a religious village established decades ago outside the 1967 borders, many of my neighbors espoused views on the far right of Israel’s political spectrum. After living in the area for several years, my Facebook friend list is now well-represented by people of the general belief that their homes were built on land that was given by G-d, and that no one has the right to take it away from them.

To give an idea of the village’s mindset, during the last election for the 19th Knesset, there were a number of posts to the village email list complaining of infighting and incidents of vandalism centered around the two major political groups that each had a rather vocal group of local supporters, Bayit Hayehudi and Otzma. The bickering was mostly over which party would take the more hardcore line on retaining the West Bank. And with almost 85% of registered Mitzpe Yericho voters participating, 80% of the voters ended up choosing one or the other of these two parties. 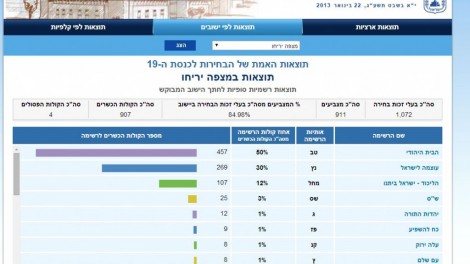 Personally, I am ambivalent towards the status of the West Bank. There is a difference between the religious boundaries of Israel (past, present, and future) and the political realities of the world in which we live. Even when we believe we have a “right” to something, we can choose to waive it, and as a democracy, the Israeli people as a whole have the right to determine how we will deploy our security forces and budget. Most Israelis support providing the Palestinian people with a homeland, and I’m not going to argue the semantics of whether they should be allowed to set this up in the West Bank because we took that territory “illegally” (which I don’t agree with) or because it’s the least problematic place to put it. For me, if it would bring in an end to the cycle of violence, I would sign over the land tomorrow.

However, the main issue that keeps the bulk of Israelis from being able to support handing over responsibility for complete self-determination to the Palestinian people is the ongoing violence in the forms of rocket fire into land that is part of Israel proper, and most egregiously, state-sponsored terrorism against Israeli citizens. For all of the arguments (of varying levels of validity) against the current treatment of the Palestinians by the Israeli military-political machine, there are very few appealing options when it comes to working with a government that calls murderers heroes. And with the new “unity” government, the Palestinian Authority becomes responsible for the actions of Hamas. So, it is, by extension, difficult to come to terms with this “partner for peace” as well.

While I was devastated by the deaths of Eyal, Naftali, and Gilad, for a few moments in the lead-up to the funeral, my heart was also comforted by how swiftly the country came together. This, I thought, would be the perfect time to work out a strategy for how we can support a moderate Palestinian government and deal a death blow to Hamas. And we could finally move forward towards an ending that would bring a better life for us all. But alas, this was not meant to be.

Instead, I began to hear reports of riots by Jews in Jerusalem, culminating in attacks against Arabs, and going so far as to introduce a modern “Shibboleth” element: asking potential victims to give the time in order to judge by the strength of their accents whether to initiate an assault. And the messages my friends began to post steadily became more militant, at times even urging an indiscriminate leveling of Gaza and the West Bank in what would amount to a war crime by any definition.

But what finally made me cry was the fate of Muhammad Abu Khdeir, the Arab boy found desecrated and burned in a Jerusalem forest. Within a single day, his family and lifestyle had been dragged through the mud. And unfortunately, so had Israel’s reputation. And yet, instead of just admitting that it was a tragedy and waiting for more information, people immediately began fighting again.  I believe that there are some Jews capable of killing an Arab child. And the Israeli people should rise up with one voice and say that Mohammed’s death matters, whether it was by Jewish hands or Arab hands.

I noticed the teardrops on my tablet screen as I was describing my despair to a friend, while the train sped on towards Tel Aviv. And, for just a moment I just gave in to the helplessness, despite the embarrassment of having strangers staring at me, wondering what had happened. Because I know in my heart that we’re better than this. And by “we”, I don’t just mean Israelis, or Jews. I mean people. We’re all better than this.