The Blogs
Steven Frank
Apply for a Blog
Please note that the posts on The Blogs are contributed by third parties. The opinions, facts and any media content in them are presented solely by the authors, and neither The Times of Israel nor its partners assume any responsibility for them. Please contact us in case of abuse. In case of abuse,
Report this post. 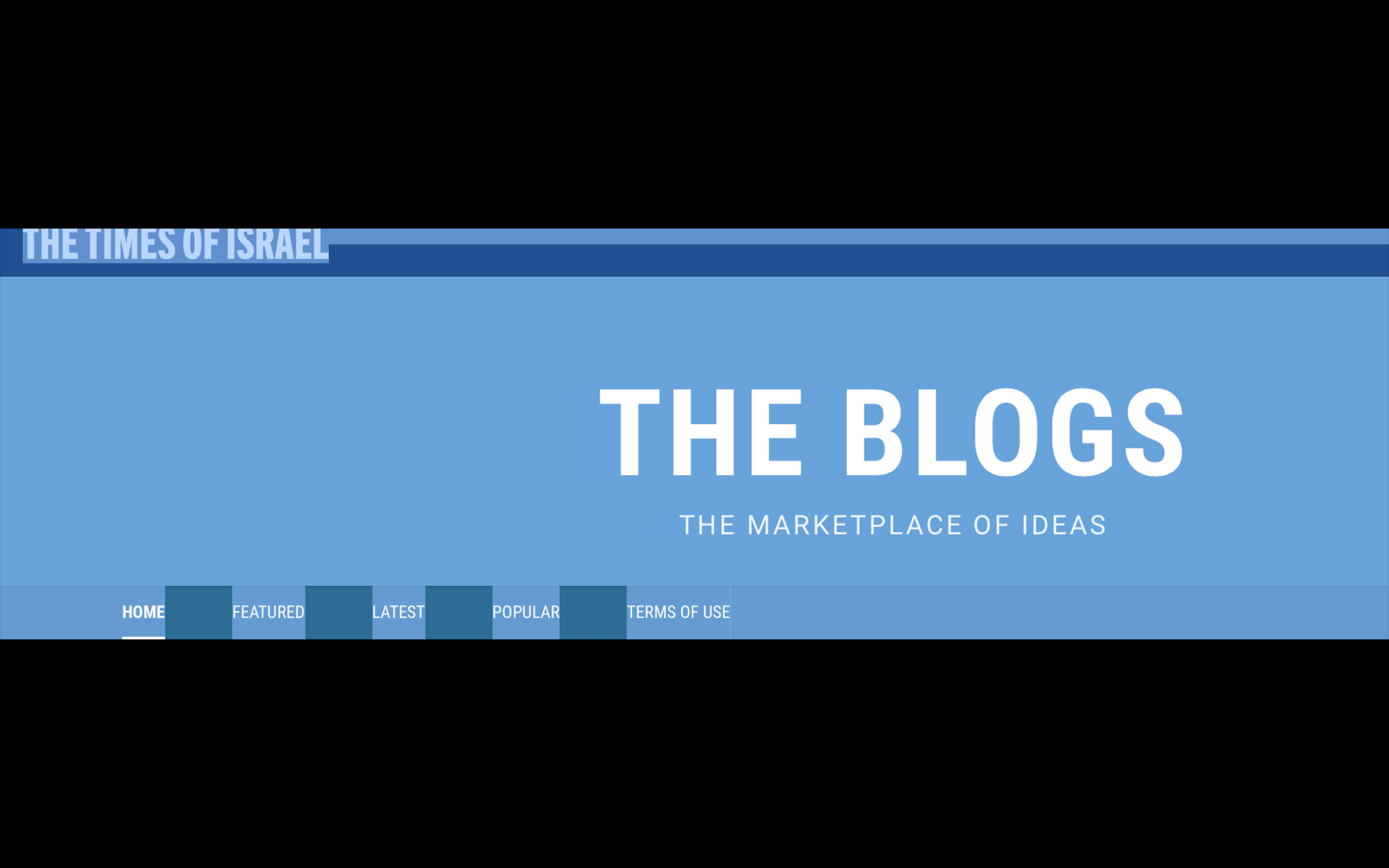 Times of Israel blogs are assigned to either “Featured” or “Latest” categories.

The Times of Israel is without doubt one of the finest online newspapers available today. With regard to Israel and Judaism, it is by far the best. Its coverage is quick, sharp, intelligent, and well-written. Its correspondents, staff, and contributors, such as co-founder and editor David Horovitz, Raphael Ahren, and Ricky Ben-David, among others, are the best in the business. From a start-up in 2012 to over 3.5 million readers today, it is an amazing success story.

The Times of Israel introduced an innovative blog platform when it launched in February 2012. As editor Horovitz has observed: the blog site “has given thousands of bloggers a unique opportunity to have their say, be heard and influence the public discourse.” The entry level to be a Times blogger is unique in the journalism world. Virtually anyone who complies with certain basic rules of civility can post and their blog is published after a brief review by Times staff. It certainly is a “unique opportunity” for otherwise unpublished writers to see their work in (online) print. (The Huffington Post recently abandoned a similar project).

However, there are blogs and then there are blogs. The blogs in the Times of Israel are divided into ones that are posted as “featured” and highlighted in bright red.

“Featured” posts are highlighted in red.

The remainder are added to the pile of blogs listed as “latest.” The “featured” blogs are, well, featured, and tend to remain on the front page of the online paper for several days or a week. The ones consigned to the “latest” group remain prominent for several hours and then are hidden behind the latest “latest.” And, of course, featured blogs are “shared” on Facebook far out of proportion to pieces relegated to the “latest” heap.

Ok. So life isn’t fair and those whose hard work is not “featured” should at least be grateful to have a place for their pieces to see the light of day, even momentarily. And they are as they continue to post at a prolific rate. Nevertheless, it is fair to point out that the “featuring” process does not appear to be entirely objective. Many bloggers are fortunate enough to have virtually all their postings “featured.” While others forever languish in the fleeting purgatory of the “latest.” Certainly, many of the posts selected to be “featured” are worthy of that distinction. But many are clearly not but their bloggers seem somehow to have found the favor of the blogging editor and their works are generally always featured even when posted in the middle of the night when the blogging editor is likely away from her desk (could there be a secret favored “featured bloggers list” for others who review and post to refer to? Perhaps someone is colluding with the Russians…).

Is it mere coincidence that one blogger has a record of 153-2 in featured posts over the past eight years? That’s a better batting average than Bryce Harper who stands to make at least $400 million as a free agent next year. Another blogger has a 29-10 record, not quite Bryce Harper stats, but not too shabby. There is the blogger pitching a perfect blog at 13-0 in featured posts. Many of the featured bloggers are batting over .500 in lifetime posts. And many of their blogs are quite decent, while many are also quite pedestrian, pedantic, and petulant. At the same time, most of the bloggers assigned to the “latest” league remain there forever, rarely, if ever, moving up to the “featured” division, even when they occasionally hit one out of the park. One of the “latest” regulars, a prolific blogger who often writes interesting pieces, is 1-131 in featured articles this year alone!   Incredibly, one blogger, named the most influential Rabbi in America by Newsweek Magazine and one of the 50 most influential Jews in the world by the Jerusalem Post, has posted literally hundreds of blogs over the past nine years – – and only one was featured.

Of course, in the large scheme of things, such matters are of little consequence. On the big things, such as Gaza, the Golan, terrorism and other matters of moment, the Times of Israel gets it right. After all, if it wasn’t for the TOI how else would we know of the recent tragic murder of Israeli Yotam Ovadia in the community of Adam, near Jerusalem, at the hands of a terrorist? And but for the TOI how would we stay current on the terrorist attacks occurring on a daily basis in Southern Israel launched from Gaza? Other papers will wait until Israel rightly retaliates for such attacks and then extensively cover any civilian injuries with little or no context or reference to the attacks which caused Israel to respond in self-defense. For that, we are most grateful to the Times of Israel for filling a vital role that no one else is doing.

But for this relatively minor blogging conspiracy, we can only hope that the Times of Israel will break out of its blogger bubble and feature newer fresher and more diverse voices.

In the meantime, in the spirit of transparency, perhaps the TOI will publish statistics (which it surely keeps) showing its top featured bloggers (and how many posts they have submitted overall), the number of bloggers who have submitted over 50 blogs (and how many were featured), and what percent its featured bloggers are of its total bloggers, among other available information relating to its bloggers.  In fact, I challenge TOI editors to do so.

About the Author
Steve Frank is retired after a 30-year career as an appellate lawyer with the U.S. Department of Justice in Washington, D.C. His writings on Israel, the law and architecture have appeared in numerous publications including the Washington Post, the Chicago Tribune, the Baltimore Sun, the Jerusalem Post, the Jewish News Syndicate and Moment magazine.
Related Topics
Related Posts