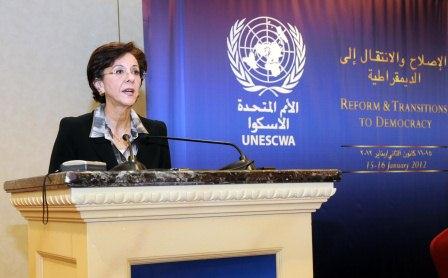 A top UN official warned of “aggressive Israeli policies” aimed at creating “discord” by establishing “Arab sectarian mini-States,” the most dangerous of which is “Israel’s adamancy that it is a Jewish State.”

In face of such preposterous and inflammatory remarks, why is UN chief Ban Ki-moon silent?

Rima Khalaf, head of the United Nations Economic and Social Commission for Western Asia (ESCWA), with the rank of UN Under-Secretary-General, did not mention that it was her own organization’s parliament that recognized a “Jewish state” on November 29, 1947, mentioning the words 30 times in its partition resolution.

Khalaf’s remarks were delivered in Tunis on Feb. 25th — in the presence of Tunisian President Moncef Marzouki — to launch a new report entitled “Arab Integration: A 21st Century Imperative.”

Although Khalaf’s Beirut-based UN agency is comprised of numerous Arab states that define themselves as Islamic and enshrine Shariah law in their constitution, she said that Israel’s Jewish character “violates the rights of both the Muslim and Christian indigenous populations” — and “revives the concept of state ethnic and religious purity, which caused egregious human suffering during the twentieth century.”

In other words, although the UN recognized Israel as a Jewish state, this fact means that Israelis are Nazis.

Is this the language of peace and tolerance enshrined in the UN charter?

Her report is full of many gems. As Khalaf explains it, if only Arabs had “stood united” and “coordinated their efforts” against Israel — or “at least met their existing commitments to joint defense” — then “Arab rights would not have been trampled”; Jerusalem “would not have suffered under Judaization policies, land confiscation and the expulsion of populations”; and Muslim and Christian holy shrines “would not have been desecrated.”

As head of a UN agency, Khalaf ought to know that it was Jordan that desecrated holy places  during its illegal 1949-1967 occupation, and Israel that has restored religious freedom to all.

Why is Ban Ki-moon silent?

About the Author
Hillel Neuer is executive director of UN Watch, a non-governmental human rights organization in Geneva, Switzerland. An international lawyer, Neuer has been described by the Tribune de Genève as a human rights activist who is “feared and dreaded” by the world’s dictatorships. Israel's Ma’ariv newspaper ranked Neuer as one of the “Top 100 Most Influential Jewish People in the World.” Hillel Neuer is a renowned speaker who has published widely, testified before the United Nations and the U.S. Congress, and appeared on CNN, BBC, and Al Jazeera. On September 14, 2016, the City of Chicago adopted a resolution declaring “Hillel Neuer Day” in recognition of his work as “one of the world’s foremost human rights advocates.” In June 2018, McGill University awarded Neuer with an honorary Doctor of Laws degree, citing his work as “an innovator” in “creating global platforms for courageous dissidents and champions of human rights from around the world,” and for being “a passionate advocate for human rights, fighting tirelessly against discrimination, torture, and injustice."
Related Topics
Related Posts
Comments