The eighth portion of Exodus, Tetzaveh/Command, is read from the Torah scroll on Shabbat, February 20, 2016.  See how my wife Miriam and I link this Torah portion to our life together through photographs illustrating the Torah tweets about the use of acacia wood covered with a layer of gold in the furniture of the Tabernacle (Mishkan) http://bibleblogyourlife.blogspot.co.il/2014/01/exodus-8-growing-gold.html.

“Make the carrying poles of acacia wood and cover them with gold.” (Exodus 30:5)

“Make two carrying poles of acacia wood and cover them with a layer of gold.” (Exodus 25:13) 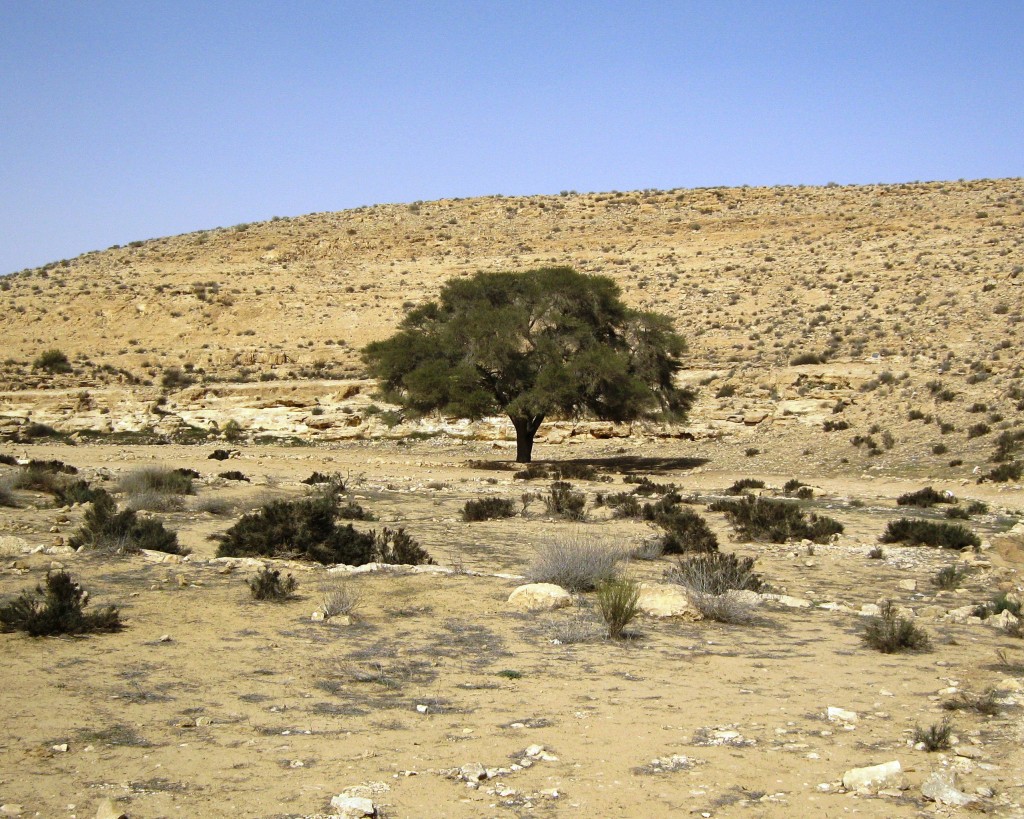 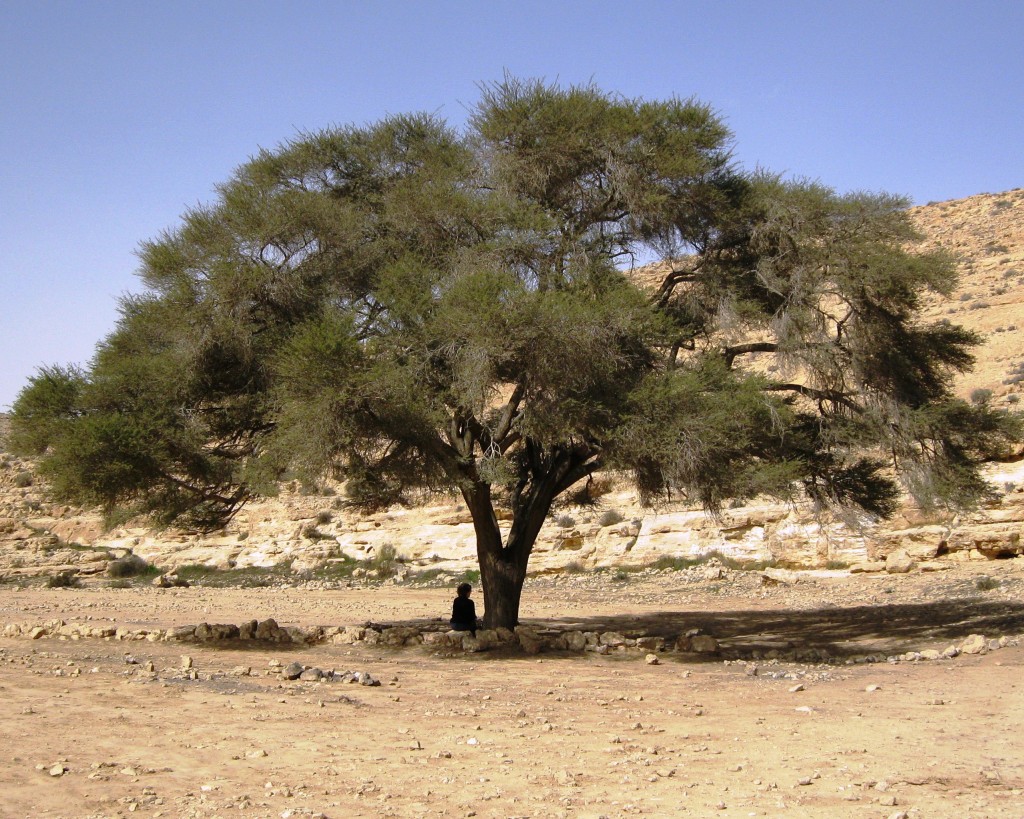 Our son Ron is a rabbi and biologist who lives with his family in the Negev desert mountains.

He teaches about interrelationships between Torah and science at the Yeshiva High School for Environmental Studies in Mitzpeh Ramon.

We drove with Ron and our son Ari and his wife Julie through the desert in search of acacia trees.

Hiking in the desert, we suddenly caught sight of a single acacia tree isolated in the valley as we came over the top of the hill.

We walked down the rocky hill photographing the tree as we got closer.  Miriam sat down to rest under the tree.

Ron explained that the tree is more than a thousand years old from tree ring studies of other trees in the Negev.

As we walked back, we asked why acacia wood was the primary material used to build the ark housing the Ten Commandments and the altar.

Why were such significant objects only coated with gold rather than being made of pure gold?

As a stable element that neither tarnishes nor rusts, gold symbolizes the eternal values of the written Torah.

Carrying the ark and altar by their gold coated acacia poles brings fresh meaning to eternal values at all times and in every place.

“God will expand Yefet (Japheth) and will dwell in the tents of Shem” (Genesis 9:27)

The transliteration of Genesis 9:27 above into the Hebrew original is significant to understanding the Torah formula.   Since Hebrew Torah is written without vowels, YaFT  (expand) and  YeFeT (Japheth) are written as the same word YFT.  The Talmud reads YaFT as YFiyuTo (beauty).  It states: “The beauty of Yefet will be in the tents of Shem.”

Yefet is the father of Yavan (Genesis 10:2).  Yavan represents the Greek cultural roots of Western art and science.  In both ancient and contemporary Hebrew, Greece is called Yavan.  Shem represents Jewish culture.

The present era of digital technologies coupled with renewed Jewish sovereignty in its homeland offer an unprecedented opportunity to realize the Torah formula. The 21st century tents of Shem in the State of Israel are growing large enough and strong enough to house the tents of Yefet that have dominated Western culture until the emergence of a redefinition of art and science during the 20th century.

Norwegian theologian Thorleif Boman compares Hebraic to Hellenistic consciousness in his book Hebrew Thought Compared with Greek. He emphasizes the dynamic, vigorous, passionate, and action-centered characteristics of Hebraic consciousness in contrast to the static, peaceful, moderate, and passive Greek consciousness.

Boman notes that biblical passages concerned with the built environment always describe plans for construction without any description of the appearance of the finished structure. The Bible has exquisitely detailed construction instructions for the Mishkan without any word picture of the appearance of the completed Tabernacle.  The Mishkan was a movable, small scale structure made of modular parts and woven tapestries.  It was taken apart, packed on wagons, and moved through the desert from site to site. Its modest tent-like design and active life was quite different from the immovable marble temples of ancient Greece that still stand today.  A biblical structure of consciousness emphasizes temporal processes in which space is actively engaged by human community rather than an immutable and stable form.

The modern art movements of the 20th century challenged the ancient Greek aesthetics of mimesis that was renewed in the Renaissance.  The Greek view of nature as a finished product to be imitated is incompatible with the Jewish view of nature left incomplete by God for humanity to actively participate in the creative process.

The aesthetics of the current postdigital age being embraced globally matches the dynamic, vigorous, interactive world of Hebraic consciousness.  This ubiquitous 21st century aesthetics of the Internet and social media also permeates art and science in Greece.  I explore this transformation in depth in my books The Future of Art in a Postdigital Age: From Hellenistic to Hebraic Consciousness (Intellect Books/University of Chicago Press) http://future-of-art.com and Photograph God: Creating a Spiritual Blog of Your Life (CreateSpace) http://bibleblogyourlife.blogspot.com.

ACTUALIZING THE TORAH FORMULA IN A POSTDIGITAL AGE

I took a break from writing this blog post to bring my seven-year old granddaughter Elianne from her school in Kfar Saba to piano lessons in Ra’anana.  A large banner hangs over the entrance to her school with three words printed in huge Hebrew letters – Ma Hateshuva? Hashe’ayla (What’s the Answer? The Question).

This banner offers an invitation to all Jews to join together to questions their deviations from the Torah formula in Genesis 9:27, “God will expand Yefet and will dwell in the tents of Shem.” This questioning can lead to living the Torah formula that is especially relevant in an emerging postdigtial age combined with the rebirth of a sovereign Jewish State in its historic homeland.