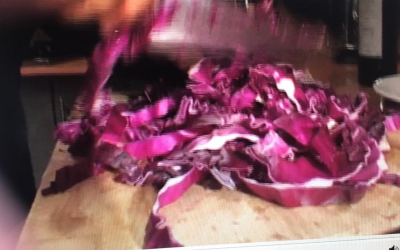 The CD with the title (in German and Hebrew) ‘Total Baloney’ was given to me some time ago by the Association of Former Residents of Central Europe, and when I finally got round to watching it I found myself taken back to the kitchen of my mother and other ‘Yekke’ relatives, back to the enchanted land of nostalgia, to the tastes and aromas of yesteryear, and to a time of innocence and memories (though not always fond).

The short film contains interviews with people of Yekke origin and demonstrations by them of the food that was cooked and the meals that were eaten in the homes of Jews originally from Germany and the surrounding countries who now live in Israel. Their manners and mannerisms, the way certain foods were prepared, the importance of how the table was set, the focus on minding one’s table manners as well as various other aspects of cooking, baking and eating were treated, at times seriously, at others with humour, but always with affection. Some people proudly displayed the handwritten recipe books their mothers or grandmothers had used. That reminded me that a few years ago my sisters and I took our late mother’s handwritten recipe book and published it for the whole family, translating her German recipes into Hebrew and English for the benefit of her descendants in Israel and abroad.

It was heartwarming to see elderly ladies (and some gentlemen) donning sturdy aprons and rolling their sleeves up to cook traditional dishes such as the red cabbage so beloved of many Yekke families, or sharing memories of the hated spinach many were forced to eat in childhood because it was considered healthy. Many other likes and dislikes also came to mind. Among the latter was the prevalence of apples in every possible kind of dish, whether savoury or sweet. That was also a bane of my own life as a child, since my mother – who was a consummate cook – found it necessary to accompany every main course with apple sauce (the apfelmus I dreaded finding on my plate at every Friday night dinner).

Cakes and pastries were also an important component of the Yekke diet, and one particular segment shows the various stages involved in the preparation of the legendary Black Forest Cake, with something I had never encountered before – an ingenious wire device for slicing the cake into two equal halves. Many Yekkes shared their fond memory of whipped cream (schlagsahne) as an accompaniment to cake. Another fond memory that arose in several interviews was the ceremonial way birthdays were celebrated, with a humorous procession, a birthday table laden with gifts, and a general air of merriment and rejoicing.

An additional touch which served to reinforce my enjoyment of the film was its accompaniment by various Schubert lieder, which were of course beloved by all (or almost all) Yekkes. The songs chosen seemed to fit exactly to the spirit of the speakers as they demonstrated the preparation and consumption of food in an atmosphere of tranquillity and harmony, and always with a touch of dry, Yekke humour. 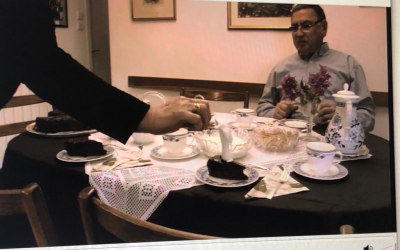 One person reminisced fondly about the paucity of spices and condiments used in typical Yekke cooking, and which she claimed did not usually exceed five. There seemed to be a general consensus that no self-respecting Yekke housewife would contemplate using garlic in the food she prepared for her family, considering that salt and pepper, onions and parsley provided all the flavouring necessary for a tasty meal. The idea of introducing coriander (whether cooked or raw) or any other ‘exotic’ flavour to a dish was anathema to the Yekke palate.

Potatoes also occupied a prominent position in the Yekke kitchen, doubtless due to their prevalence in Germany, and the general reluctance to embark on getting involved in the slightly more complicated process of preparing rice. Thus, potatoes in one form or another, whether as salad or in their boiled or fried incarnation, accompanied almost every meal.

If you’re curious to see what caused me to enthuse about the traditional Yekke kitchen, the film is available on YouTube at https://www.youtube.com/watch?v=h9dn6J8x_5U

Go ahead and take a look. You’ll enjoy it, I guarantee.