In 1892 the Middle East’s first train line was inaugurated, the Jaffa-Jerusalem Railway. It had been dreamed of as far back as 1838 (a mere decade after the invention of the passenger train) and had been talked of for half a century.  Plans had been designed and then scrapped. Maps had been drawn, redrawn and abandoned. Money had been raised but not enough. Even the great philanthropist Moses Montefiore had pushed the idea, only to lose interest after the death of his wife.

Ultimately, Yosef Navon, a Jerusalem entrepreneur from a family of esteemed Sephardic rabbis, pushed, cajoled, begged, borrowed and lobbied, and the thing happened. The journey took as long as six hours, and the train was ridiculed by such notables as Winston Churchill and Theodore Herzl. It was so slow that a famous joke told of a Jerusalemite shouting through the window to a friend outside: “I thought you needed to go to Jaffa, why aren’t you on the train?” only to be told “I was in a hurry, so I decided to walk.” But there it was, running (or wheezing) from the world’s oldest port to the Holy City and back every day.

For over a century it carried passengers to The Khan (the caravanserai built on the remains of a Crusader castle on the hill opposite Mount Zion), within clear view of the legendary medieval walled city. From there travelers had to walk down one steep hill and up another to enter Jerusalem, though pack animals and porters could be hired if one had the money.

By the end of the 20th century the route had become a quaint relic, worth a ride perhaps for the pretty views and the sense of history, but not exactly an indispensable mass transit conduit. And when, after a seven-year closure for repairs, the route was reinstated in 2005, it was without the last few kilometers of track, reaching its final stop in a corner of southwest Jerusalem that made it irrelevant to 90% of the city.

The old Jerusalem train station is now “The First Station”, a historically themed open-air shopping mall, featuring a kiddy train pulled by a tractor to entertain the children.  Its claim to fame is that it is open on Shabbat.  It makes me sad to go there, though I’m not completely sure why.  It is as though the Liberty Bell was being used to decorate a child’s birthday party. Here is the pride of Yosef Navon, the opening of the Land of Israel to the West, this iconic moment in history being reduced to overpriced beers and burgers in eateries with railway-themed names.

But recently I was lucky enough to enjoy a more uplifting use of the abandoned rail line: Train Track Park. Last week I took the train to Jerusalem, getting off at Malcha, the final stop. Though a city bus was available, I spontaneously decided to walk the remaining seven kilometers of track, the discontinued portion.

Train Track Park is a gem, worthy of an entire day, but quite appropriate for a brief visit as well. During my two hour walk up the smooth faux-wooden trail that runs between the original tracks I passed hundreds of people in the middle of a work day: mothers pushing baby carriages, joggers, cyclists, Arab kids kicking soccer balls, handicapped people in wheelchairs, Hasidim rushing to their next minyan and couples out for a romantic stroll.  Displayed every few meters along the way are photos from the early days with historical or technical explanations. While these are a delight,  even more delightful are the quotes etched in iron on signs along the way: from the prophets, the poets, the travelers, the workers, the celebrities and the journalists who rode the train, from Kaiser Wilhelm to David Ben Gurion. There are words of praise, a bit of kvetching, snatches of children’s songs and some nationalistic puffery, all to help you relive the old route, as though you were part of the historic pilgrimage that was the original Jaffa-Jerusalem line.

Train Track Park brings history to life in a way that is neither heavy-handed nor patronizing. Anyone who wants can have a complete two hour history lesson as I did, or simply take a walk, ride or jog in a beautiful park with some stunning views of the city.

While I much prefer Train Track Park over the First Station, I am well aware that this is a matter of taste.  I know that plenty of people love the First Station and feel that it honors the historical site, which admittedly, was just a shuttered compound until it was reopened in 2014.  The challenge that we face when we restore a landmark is the same challenge that I face as a guide.  How to make something ancient and seemingly irrelevant come alive again.  How to make a 12-year-old feel awe in the presence of the walls of Jerusalem, or to communicate the inspiration of the founding of Degania to a Manhattan lawyer.

In fact, the story of historical preservation in Israel mirrors, and often epitomizes, the Zionist experiment: to make the old become new. Theodore Herzl’s futuristic novelization of the Jewish State, published in 1902, was called “Altneuland” (“Old New Land”) and that has been the essence of this venture for over a century, or some would say, for 2,000 years.

And so we continue to experiment.  Sometimes we goof completely, as when Gymnasia Herzliya, the first Hebrew High School in Tel Aviv, was torn down to build the Kolbo Shalom office building in 1965.  Sometimes we get something practical, educational, and inspiring like Train Track Park, and occasionally we land somewhere in the middle, as with the First Station.  In historical preservation, as in all of our ventures in this land, we are a work in progress.  The challenge of stewardship is unending, a responsibility without limit, and the stakes are, at once, our past and our future. 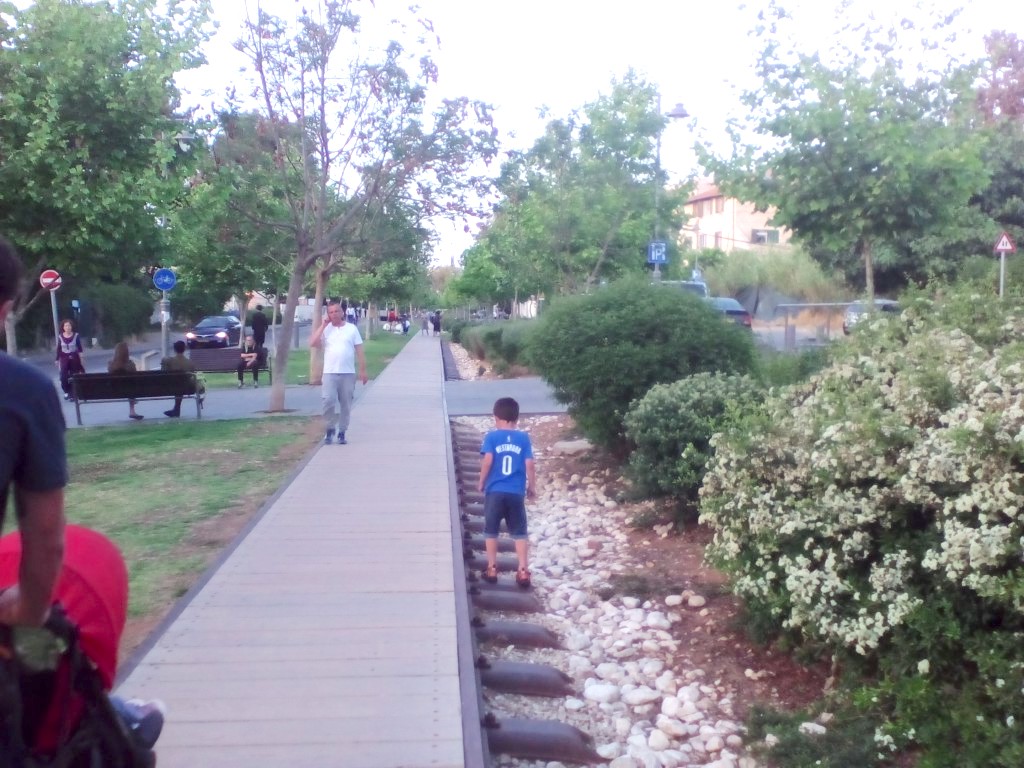 Train Track Park, Jerusalem, late afternoon. (Bill Slott)
About the Author
Bill Slott is a licensed Israeli tour guide who has hiked and biked the length and breadth of the country. Bill is a member of Kibbutz Ketura, where he has lived since 1981 with his wife and three daughters.
Comments