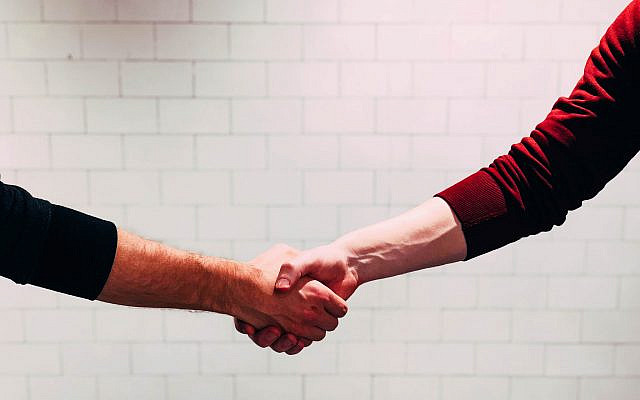 Photo by Chris Liverani on Unsplash

Approaching his home after decades abroad, Jacob sent messengers ahead of him to inform his brother that he was coming and that he hoped that they could put their past conflicts behind them. The messengers carried lavish gifts to appease Esau in the event that any feelings of malice still remained. The night before their meeting, Jacob wrestled with Esau’s guardian angel and was victorious. It was for this that his name was changed to “Yisrael” which indicates that “you have battled with God and won” (Genesis 32:29). The following morning, Jacob’s messengers returned to him and informed him that Esau was approaching with 400 men, clearly intent on doing battle. Yet when the two brothers finally come face to face, rather than attacking Jacob, Esau embraces him in reconciliation. What has happened to suddenly transform Esau from an angry man of war to a loving and forgiving brother? A careful reading of the text in parshas Vayishlach provides us a profound answer.

The word “panim/face,” or some form of it, appears over a dozen times throughout the forty-five verses that tell the story of this interaction. The episode begins with the verse:

Plainly rendered, this means that Jacob sent messengers before him to Esau. But on the literal level of “לְפָנָיו/lefanav,” we see that Jacob sent messengers to Esau’s “panim/face,” which the chassidic masters equate with “pnimyus/internality.” In order to make peace with his brother, Jacob knew that he would have to reach beyond Esau’s exterior to access his innermost dimension. Jacob instructed the messengers to say to Esau:

The word face appears four times in this one verse. Twice it refers to “panav/his face” and twice to “panai/my face.” The gift that Jacob sends to Esau’s “face” is his own “face.” In other words, Jacob wants to relate to his brother from one “pnimyus” to another. He is hoping that they will be able to communicate from the level at which they are both perfectly pure, completely Godly, and ultimately one. To that end, the night before their encounter, he stays alone in the wilderness and delves deep within himself to access his own essence. It is then that he encounters the angel, and in the morning, before setting out to meet his brother, he names the place to commemorate the deep mystical experience that occurred there:

The name he chose for that location was “Peniel,” which means “The face of God.” He chose this name because there he experienced God “panim el panim/face to face.” Having reached this level of the “Pnei Hashem/the face of God” deep within his own “pnimyus/internal core,” he set out to encounter his brother. When they meet, he finds that his efforts have paid off. By accessing his own essence, he has likewise activated the essence of his twin brother. On meeting, he says to him:

In Esau’s face, Jacob sees the face of God. This has enabled Esau, at least momentarily, to see the face of God within himself as well. The conflict between them evaporates because they realize that they are one. They embrace one another and weep in this moment of true reunion. Jacob knows that it won’t last long, and therefore though Esau invites him to come live with him, Jacob respectfully declines. They part ways in peace, and they will not meet again until their father Isaac’s funeral at the cave of Machpelah in Hebron twenty-three years later.

It is at this same location, some three decades after Isaac’s funeral, that Jacob and Esau will “meet” for the final time, and Esau’s tremendous holiness and potential are finally revealed. The Midrash relates that on Jacob’s death, his sons carried his body to Hebron to bury it in the cave where his grandparents, Abraham and Sarah, his parents, Isaac and Rebecca, and his wife Leah had been buried before him. But when they arrived, Esau and his soldiers blocked their entry. The final burial plot in the cave belonged to him, Esau claimed, denying the truth that he had sold his share to his brother decades earlier. Jacob’s grandson Chushim drew his sword and decapitated Esau, whose head then rolled into the cave. Twins, Jacob and Esau were thus born on the same day and died on the same day. The Midrash relates that when Esau’s head rolled into the cave, it landed in his father Isaac’s resting place, as Targum Yonasan states: “Esau’s head lies in the bosom of Isaac” (Targum Yonatan, Genesis 50:13).

The chassidic masters teach that there is profound significance to the burial of Esau’s head, and head only, in the cave of Machpelah with the three holy patriarchs and matriarchs. The head represents our highest root and potential. As the mystics teach, Esau’s soul-root was extremely lofty – even higher than the root of Jacob, which is why Isaac desired to give Esau the birthright blessing. But whereas Jacob was capable of bringing the highest levels down into the “עקב/eikev/heel,” there was too great a gulf between Esau’s head and his body. Throughout his life, therefore, the two aspects of his being – his Godly soul and his animal soul – battled incessantly. It was only at his death that his highest nature was freed from the anchor of his body. His head rolled into the cave and rested with his father who had always recognized his immense Godly potential and tried to bring it down to express itself in this world.

Like Abraham, Isaac, and Jacob, our job is to expose the face of God wherever it is hidden. All of those who act “ungodly” in this world are simply unable to access their Godly essence and potential. It is the lack of belief in, or awareness of, the “Pnei Hashem/face of God” within them that makes them act in ways that are contrary to their true and highest nature. To transform the world, and to hasten the arrival of the time of peace and perfect vision, we must work tirelessly to help those who are lost to find and reveal the Godliness within them.