“Believe 13 to 16 Nazis Will Die” screamed the headline of the Toronto Daily Star on Monday, September 30, 1946. The newspaper, to be integrated into our new exhibit about Simon Wiesenthal, may have cost only three cents at the time, but its historical value for our new collection, and for teaching about the Holocaust, is unparalleled.

The picture on the cover is of three top Nazis – Hermann Goering, Admiral Karl Doenitz and Rudolf Hess — “as Nuremberg judges began handing down verdicts against 21 Nazi leaders”; the Nuremberg trials were winding down. The obsession of the Daily Star with the Nazis and the trial itself on that day was apparent — as another headline on the cover read “Swagger Gone, 21 Nazis Gaze at Ticking Clock” as they confronted Justice.

The International War Crimes tribunal says another report on the cover page, “pronounced Nazi Germany guilty of ruthless, aggressive war against 11 countries and stripped the 21 Nazi defendants of this last hope for an acquittal.” In the end, only 10 Nazis were executed by hanging while Goering committed suicide and avoided being hung.

Considering the volume of Germans and their associates involved in carrying out the murder of six million Jewish people and many, many others – in combination with the thousands of Nazis who fled to North America (including Canada) and particularly South America – the Nuremberg trials and subsequent trials and tribunals were unsuccessful in bringing the majority of Nazi war criminals to justice.

In fact, another column on the front page of the Star that day observed: “Nazi Hearing? No! Herring Is First.” According to the report, “for many Nurembergers fish today took preference over the judgement on Nazi criminals…One German was asked whether he was waiting to witness the trial’s final stages, answered there were more important things than that.”

People wanted to move on and forget about the atrocities. This is why Simon Wiesenthal refused to let Nazis get away with murder and hunted them for the rest of his life. But what the Nazis did was so immense that tremors of their actions are still felt today. This week we learned that a Jewish student was voted off the McGill University board – because he is Jewish. We also learned that white supremacist posters appeared on some campuses while this weekend similar groups are planning to march in various cities across Ontario. Hateful newspapers are still being widely distributed glorifying Hitler and the swastika.

Nazism is not only an affront to Jewish people, but also to Canadians far and wide. The Star covered Nuremberg because over 40,000 Canadians were killed in action trying to liberate Europe while hundreds of thousands were wounded. In fact, today is the start of the poppy campaign to raise money and awareness in honour of Canadian veterans. If we are going to uphold these fundamental values, all Canadians should stand up to the latest scourge of antisemitism on our university campuses and beyond.

We are living in perilous times. That’s why Simon Wiesenthal’s story is once again becoming front and centre. Those who forget the past are destined to repeat it. This old frail newspaper from 1946 which we dug up from an old barn in rural Ontario (thanks to Melissa Mikel) is a reminder and a warning of dangerous times ahead. 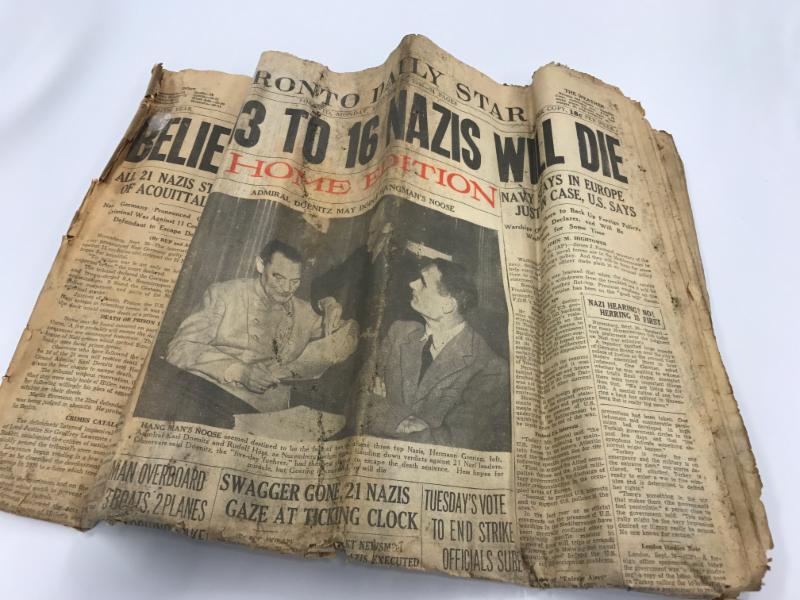