Encouraging Signs Obscured by Troubling Ones

Those horrible Nazi signs at COVID-19 rallies are shielding other, positive, signs: though being trivialized, Nazism is actually being portrayed as evil, and more non-Jews are denouncing the baseless analogy

Much has been written decrying the perverse use of Nazi imagery to criticize the policies aimed at limiting the spread of COVID-19.  (Among many other, stronger offerings, my own contributions were published here and here.)  At rallies in multiple states, protestors are (literally) drawing analogies between their governors and Hitler, and stay-at-home policies to Nazism.  This is what it looks like here in Illinois: 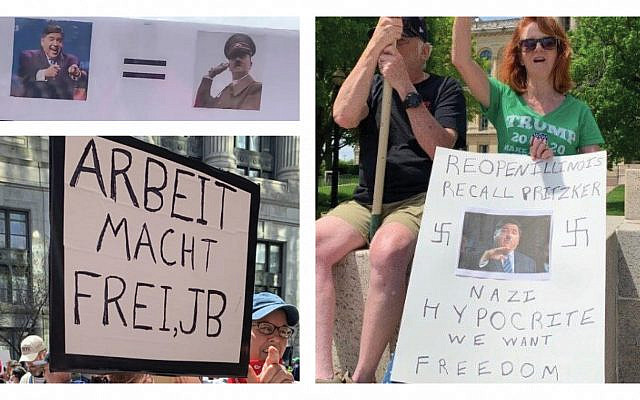 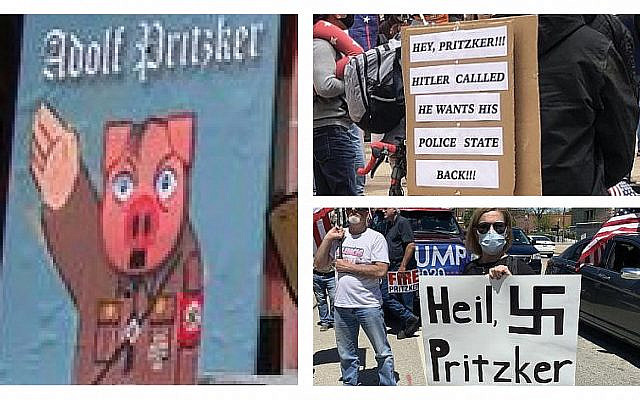 Those signs targeting Illinois Governor J.B. Pritzker are particularly pernicious, given his own strong Jewish identity, the eastern European roots of his ancestors, and his singular leadership building the Illinois Holocaust Museum., to say nothing of his paramount concern being nothing less than people’s health.

As hard as it is to discern in the emotions and dangers of this moment, we should recognize the “positives” hidden behind these despicable signs.

First, the number of people with such signs represent a small minority of all protestors. That is not cited to diminish the offense committed, but to accurately frame the scale.

Second, as base and baseless as the signs’ analogies are, they unequivocally depict Nazism as bad.  They aren’t applauding Nazism. That is in stark contrast to earlier pro-Nazi rallies throughout America.  (In Chicago, pro-Nazi marches, starting in 1931 at the Field Museum, drew up to 8,000 in 1939 in Irving Park, and as late as 1966, 3,000 in Marquette Park.  A mere decade later, despite the publicity of their Supreme Court victory permitting them to march in Skokie – which they chose not to do – the rare Nazi march withered to under three dozen participants.)

Third, it is not only Jews criticizing the current Nazi signage.  Some of the COVID-19 protest organizers have dissociated themselves from the images.  The analogies have also been condemned by a broad spectrum of public figures: Christian, Muslim, veteran, civic and minority leaders.

Appropriately separating their opposition to many COVID-19 restrictions from their contempt for Nazism, Illinois Republican officials have joined the chorus of critics. That roster includes the Republican National Committee’s Illinois representative and 3 Illinois GOP congressmen.

This broad societal consensus is a meaningful improvement upon the general silence that met the last large scale display of Nazi imagery on Chicago’s streets.  At anti-Israel rallies between 2006-2009 the following signs were displayed: 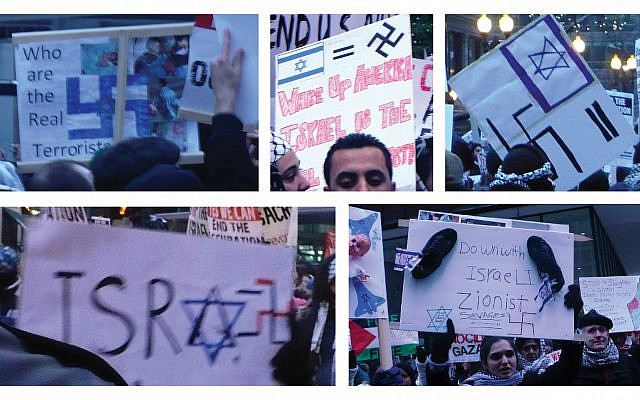 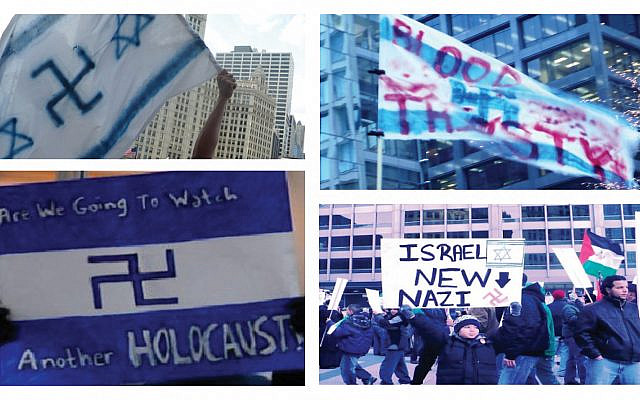 Those signs were held high not by a few, random protestors, but as a prominent feature at multiple anti-Israel rallies.  What made those Nazi images especially disturbing – and hence the silence of non-Jews especially disquieting – was the equating the Jewish state with history’s greatest murderer of Jews.

As clearly illustrated above, the abuse of Nazi imagery was not tangential – as in today’s rallies – but ubiquitous.  And the rally sponsors, rather than condemn the signs, rationalized them.

In a Chicago Tribune article that followed the signs being publicly exposed, the executive director of one of the rally organizing groups acknowledged that the posters should have been confiscated. But he and the other 39 co-sponsors failed to confiscate the signs or criticize them for their content.  The best they could do was muster frustration for the negative public relations impact the signs had on their cause. The interviewed executive went on to argue, “As hundreds of innocent [Palestinian] human lives are crushed…by a belligerent Israeli government, I find it appalling that some on the pro-Israeli side are better concerned with cardboard paper.”

His not so cryptic message: Inflammatory hate speech against Jews – but certainly not Arabs or Muslims – is understandable.  Especially since it is only being communicated on “cardboard.”

Hopefully, the widespread condemnation of today’s Nazi imagery signals the end of rationalizing and indulging such hateful signs.

The Nazi imagery we are seeing today is not new.  It is the broad outrage that is new.  And most welcome. That is a positive sign to be sure in these troubling times.