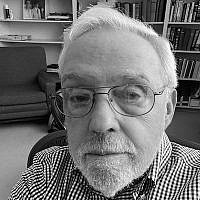 The Blogs
George B. Driesen
Apply for a Blog
Advertisement
Please note that the posts on The Blogs are contributed by third parties. The opinions, facts and any media content in them are presented solely by the authors, and neither The Times of Israel nor its partners assume any responsibility for them. Please contact us in case of abuse. In case of abuse,
Report this post.

This long retired appellate lawyer is aghast at the predictable chaos Florida Federal District Judge Aileen Cannon’s baseless decision appointing a special master in Trump’s suit against the Department of Justice has wrought. Judge Cannon agreed that a “special master” is required to review the government documents seized when, pursuant to a warrant issued by another federal court, the FBI searched his Mar-A-Lago palace seeking evidence in its investigation of the crimes Trump committed when he took many boxes of documents from the White House before he left.

The twice impeached former president claims some of those documents are privileged. Ordinarily, such claims are raised if and when the defendant is indicted. But Trump is “special,” says Judge Cannon, he would suffer “reputational harm,” if he were indicted based on “privileged” documents. Hence the special master review.

Now Trump’s attorneys are telling the special master that they cannot represent their client without reviewing all 11,000 pages of documents, including a trove that are “top secret” and “sensitive compartment information. Trump’s attorneys want more time. To complicate matters more, the Justice Department has filed an appeal from Cannon’s order and asked the reviewing court promptly to set aside so much of her order as applies to classified documents. This mad caper has thus entangled three federal courts and the special master (himself a retired but still active federal judge in Brooklyn). Charles Dickens’ Mr. Bumble declared “the law is a**.” Hmm.

About the Author
I've lived 89 years, bulk of it in Metro D.C., and been trained and certified in both professions. Politically I am a moderate, but also passionate on matters of principle. Served the people in government (Labor Board, PBGC), unions in private practice. Raised as a Reconstructionist and remain a firm adherent to its philosophy and approach. Synagogue member all my life in Boston (Cambridge), and in the Maryland and D.C. area. Politically I'm a Democrat, now passionately so because I think the Republicans have become unwilling to struggle for people let alone critically important needed change, especially to preserve homo sapiens who are threatened by rising temperatures. Married, three grown children with children of their own all of whom are adults. So far they've mostly done well in various professions and work settings. Early commitment to civil rights for ALL our citizens.
Related Topics
Related Posts