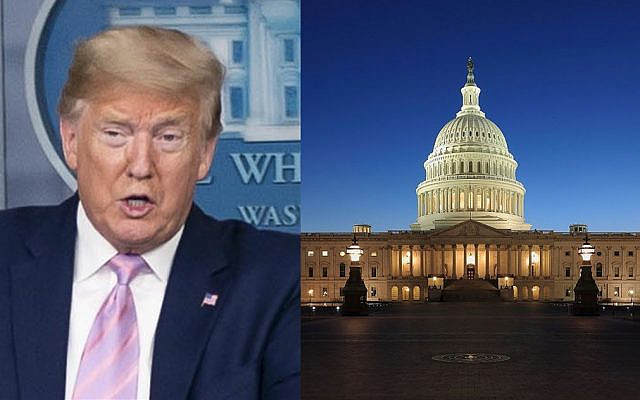 Donald Trump and U.S. Capitol at dusk as seen from the eastern side (credit: The White House / Martin Falbisoner / Wikimedia Commons).

The attack on the U.S. Capitol on January 6, which was a failed attempt to stop Congress from confirming Joe Biden’s and Kamala Harris’s election win, and which resulted in the death of five people and the injury of several others, has been widely condemned. Trump incited, and initially refused to calm down the mobs but rather inflamed them further by repeating the claim disproved by U.S. courts that the election “was stolen”. Condemnations of Trump have come from the whole world, including U.K. Prime Minister Boris Johnson, often seen as one of the few world allies of Trump, and from across the U.S. political spectrum, including many Republicans.

But placing all the blame on Trump would be naïve and mistaken. If there is anything surprising about this assault on democracy it is that it had not occurred earlier. This was predictable. While Republicans such as senators Mitch McConnell and Lindsey Graham and vice-president Mike Pence said and did the right things on January 6, they have been silent about Trump’s incitement and many lies for years, and they helped him win an election and remain in power even after he was impeached.

Did anyone seriously expect that incitement and lies would result in nothing serious? Did anyone expect that the millions of Trump voters would not be angry if they believed his endlessly repeated claims that an election was stolen from them? We condemn Palestinian chairman Mahmood Abbas when he lies and incites violence against Israel, predicting, quite correctly, that his words would likely inspire violence, but then we seem to totally forget that correlation when it is Trump, not Abbas, who does the lying and incitement? We have no excuse. None.

In fact, each person who voted for Trump is responsible too. Trump’s behavior in inciting the January 6 attack wasn’t new. He has been doing this ever since he started contesting the 2016 election. He called Mexicans “Drug dealers, criminals, rapists”. He repeatedly demonized Muslims. Trump lied and demonized his way to victory. He even hinted that his opponent in the 2016 election, Hillary Clinton, should be assassinated. And after he was elected, not surprisingly, his incitement continued. He called civil rights activists, “anarchists” and “thugs”, while he encouraged violence against them.

Trump’s supporters knew what Trump was and therefore what would be coming if he was elected, but they elected him despite it, and in many cases because of it. After he was elected and the pattern of incitement continued, they kept him in power anyway. They deserve our scorn, and if they have any decency at all, they should be busy right now writing public letters of apology. But except perhaps for a tiny minority, they’re not. They’re rationalizing. They’re excusing. They’re diverting.

They’re being selfish and cowardly, just as they have been all along in the sorry history of Trump’s political career. Not only are they not taking responsibility for their own actions, but they are ensuring that Trump’s despicable legacy continues to infect and infest U.S. politics and therefore world politics. Shame, shame, shame on them!