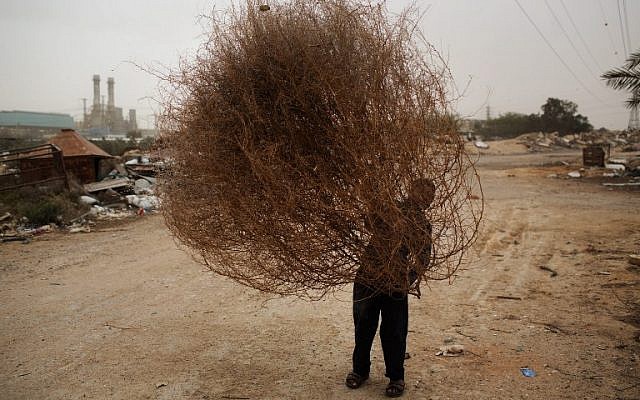 A Bedouin boy walks with a dry bush during a sandstorm in Wadi Na'am, an unrecognized Bedouin village, in the Northern Negev desert near Beersheva, January 6, 2015 (photo credit: AFP/MENAHEM KAHANA)

Donald Trump’s decision to withdraw from the Paris climate agreement is arguably the most unforgivable of a presidency characterized by chronic duplicity, pettiness, vulgarity and selfishness. As climate-vulnerable countries across the globe scramble to survive the rising sea level and violent storms, the US president offered a delusional, jingoistic narrative of American victimhood and greed. Climate change – it seems — is not America’s problem.

The truth is that no other country has contributed more than the US has to the earth’s high atmospheric carbon dioxide levels. But in the world according to Trump, not only does science not matter – neither does responsibility to humanity and the planet’s future. Only the warped mind of a bully could imagine that the world is laughing at the US for acting like a grownup and being accountable for its past and present pollution.

This all matters because it is quite possible that a domino effect will ensue. Some of the 194 other countries who signed the 2015 agreement may follow the US example, opting for short-term avarice. As each nation joins the US in claiming a special exemption for its citizens, the world will collectively return to the path of least resistance — a path where our earth becomes warmer and less stable. Ice will melt; islands and coastal zones will go underwater; storms will become increasingly violent. Most of all, the present, fleeting opportunity to prevent the cascade of feedbacks that could spin the climate out of control, will be lost.

Environmental historians often talk about two stages in countries’ development: The “frontier stage,” when nations are juvenile in their assumption that reserves are unlimited. With no concept of deferred gratification, they assume that lands and their resources should be exploited as fast and as aggressively as possible. Eventually, hopefully before the damage is irreversible, they move to a second, more mature phase, when they realize that they need to show self-restraint and create safeguards for a sustainable future.

For some time, pundits have noticed that there is a child in the White House. For months now, his juvenile behavior has made decent folks around the world wince. But now his antics have put the entire planet’s climatic future in peril. America’s leader has surrounded himself with a circle of scientist-free sycophants who assure him that it’s perfectly all right to tell world that he really doesn’t care whether humanity reaches an agreement to stabilize climate for the future.

Things will get worse in Israel and the region

Israel in particular is affected by the president’s decision. As a country that is already paying a price for the planet’s growing surfeit of greenhouse gases, our leaders need to join the chorus of outrage that expects more of the United States. If Israel really “has no greater friend than Donald J. Trump,” then here are some facts about life in the Promised Land that Trump might wish to consider:

If you go on the website of the Israel meteorological service http://www.ims.gov.il/IMS/tazpiot/RainObservations/ the data are right there: This year’s rain in Jerusalem (counted from August 1 2016 to May 31, 2017) is but 61% of the annual, historic average. In Zemach site, alongside Lake Kinneret, precipitation reached but 69% of past levels. Low rainfall is reported in pretty much all of the other local weather stations around the country. The verdict is in for 2017: yet another drought year.

Climatologists and hydrologists tell us, however, that this really should not be called a drought. It’s a new reality — a reality that is rapidly getting worse from year to year. Israel’s average temperatures have increased by half a degree every ten years for four decades now. Israel’s Ministry of Environment reports a 10 centimeter rise in the Mediterranean Sea during the past twenty years. The number of extreme heat events is climbing, with summers becoming increasingly excruciating.

This also means that the Kinneret is at its lowest level in recorded history. The sublime Sea of Galilee used to serve as a national reservoir. But water managers are now talking about plans to transfer desalinated water to the Galilee to save the evaporating, shrinking lake.

In short, anyone who takes a few minutes to look around this part of the world can see the signs of climate change everywhere. The implosion in Syria was exacerbated by the collapse of local agriculture due to these drought dynamics. A hotter and dryer Middle East will do little to help reduce local volatility. Things are going to get worse. As population in Africa soars towards the four billion mark, the number of “climate refugees,” who choose to walk to the relatively prosperous land of Israel, will surely grow.

That’s why Israelis should be outraged about Trump’s decision to scrap the very hard-won agreement promoted by the Obama administration. In contrast to flawed earlier climate treaties and protocols, the Paris agreement managed to bring 98% of the world’s emissions into a single framework so that together we could steadily move the planet onto a sustainable track.

America is not a victim of the Paris agreement

In debunking the disinformation and downright lies in Trump’s climate-related statements, a good place to start is the president’s boast that America has the best environmental performance of any country on earth. This is a peculiar claim in light of the most recent inventories of greenhouse gas emissions showing that the US produces 17.62 metric tons of Carbon Dioxide per person.

That means that America releases three times more emissions per capita than China and 12 times more than India – the two nations he singled out for criticism in Thursday’s speech. Of course, neither of these countries are paragons of environmental virtue. But they are also relatively poor places, that nonetheless, have agreed to “get with the program.” When compared to countries like Costa Rica or Denmark, America’s efforts to reduce its carbon footprint appear pitiful. Of the twenty countries that contribute most to global greenhouse gas emissions, only Saudi Arabia’s per capita carbon footprint is higher than the US

It is hard to understand how American industry is being handicapped by the Paris agreement, the cornerstone of Trump’s position. California has independently adopted America’s most ambitious climate-change-driven regulatory policies. A 2016 law requires the state’s Air Resources Board to reduce heat-trapping emissions to 40% below 1990 levels by the year 2030. It essentially will require that 30% of cars sold in the state be electric. But California’s economy continues to flourish: it is now the sixth largest in the world, and has cut its unemployment rate in half.

Ultimately though, criticizing President Trump’s decision should not rely on its economic foolhardiness. It’s about ethics – about right and wrong.

Every year during Israel’s Tu B’shvat tree celebrations, school children throughout the country are told the ancient legend of the beloved scholar Honi the Circle Drawer:

One day during his travels Honi came upon a man planting a carob tree.
The rabbi said to the man, “How many years will this tree need to produce fruit?”
The man answered, “Seventy years”.
Honi said, “Is it so clear to you that you will live seventy years?
The man answered, “I found carob trees in the world. Just like my ancestors planted for me, I plant for my children”.

This axioms of intergenerational justice and sacrifice for the future have been at the heart of Jewish ethics and the more modern vision of global sustainability. Most of the carbon dioxide emissions that we release will stay in the atmosphere for a couple of hundred years. Some 20% of it may stay for far longer. We inherited one of the most stable and clement climates in human history. What we do to the planet will matter for a very long time to come.

By bailing from the Paris agreement, Trump has declared that rather than planting a healthy future for his grandchildren, he would rather sow the seeds of our collective environmental destruction.