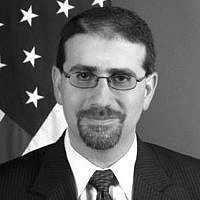 The Blogs
Daniel B. Shapiro
Apply for a Blog
Please note that the posts on The Blogs are contributed by third parties. The opinions, facts and any media content in them are presented solely by the authors, and neither The Times of Israel nor its partners assume any responsibility for them. Please contact us in case of abuse. In case of abuse,
Report this post. 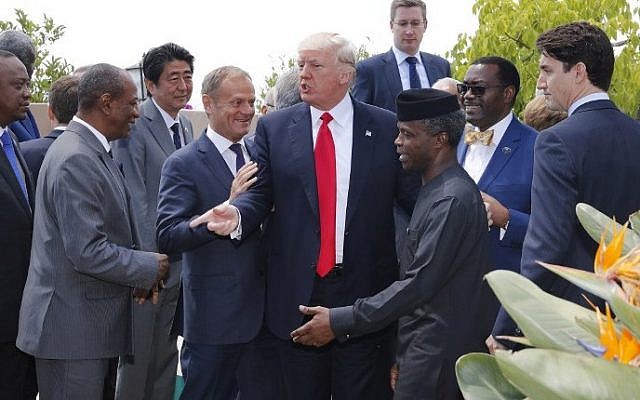 European Council President Donald Tusk (4th L), US President Donald Trump (C), Japanese Prime Minister Shinzo Abe (3rd L) and Canadian Prime Minister Justin Trudeau (R) pose with African leaders after the family photo at the end of the expanded session during the Summit of the Heads of State and of Government of the G7, the group of most industrialized economies, plus the European Union, on May 27, 2017 in Taormina, Sicily. (AFP PHOTO / POOL / PHILIPPE WOJAZER)

President Donald Trump’s recent visit to Israel won praise from Israeli officials, commentators, and the public, and his efforts to convey strong support while also advocating for Israeli-Palestinian peace were widely seen as a success. But the troubles he encountered on his stops in Europe, and his subsequent withdrawal from the Paris Accords on Climate Change, should be setting off alarm bells in Israel. The fraying of the Western alliance and the perception of a withdrawal of US leadership are developments that bode ill for Israel’s interests, its security, and its relationship with the United States.

It’s easy for Israelis to be cynical about Europe. European politicians can be patronizing and one-sided in their criticism of Israel, and all too forgiving of Palestinian contributions to the festering conflict. Nevertheless, Israel prizes its close partnership with Germany, which Chancellor Angela Merkel has done much to nurture; maintains close, if at times cooler, ties with France and the United Kingdom, and has built very friendly relations with the newer democracies of Central and Eastern Europe.

Israel is making great strides in developing new relationships in Africa, Asia, and Latin America. Not a week goes by without a visiting trade or security delegation from those parts of the world, seeking access to Israeli technology and counter-terrorism expertise. But despite those new opportunities, being a member in good standing of the community of developed democracies is an important part of Israel’s own self-definition.

So what happens when the United States, Israel’s closest ally and the longtime leader of the Western bloc, seems to be actively distancing itself from those partners? Trump’s lectures to his NATO partners on their defense spending, his equivocation on committing to the Article 5 mutual aid clause, his complaints about European trade practices, and his general rudeness left nearly all his European counterparts concluding that they cannot count on the US partnership. It also left Russia, long eager to stoke US-European divisions, delighted. The decision on the Paris Accords has only reinforced both reactions.

That puts Israel in a terrible spot. First it will significantly diminish the United States’s effectiveness in standing up for Israel to deter unfriendly European initiatives. During the Obama Administration, we devoted considerable energy to trying to coordinate European support of US initiatives. We did so not only to maintain US leadership on a critical issue for our interests, but also, quite frankly, to rein in bad ideas that emerged from any number of capitals. Israel looked to the United States to head off or effectively manage European summits on Middle East peace, independent negotiating efforts, and settlement-product labeling initiatives. Secretary of State John Kerry did all three successfully. We routinely had to engage in intense lobbying to get European governments to join us in opposing Palestinian proposals to delegitimize Israel or gain premature recognition for statehood at various international organizations. Obviously, the tensions on display during Trump’s European tour and the sense that the US is walking away from its leadership role will mean far less sympathy for US arguments.

Second, the perception of US strength and its credibility as a reliable ally are critical Israeli assets. So closely aligned with the United States, and reliant on US security assistance, Israel obviously depends on American support to ensure its own ability to defend itself and to deter enemies who might attack. The perception of an unreliable United States, turning away from its closest allies, withdrawing from signed agreements, and calling into question solemn commitments, does Israel no favors. As the US reputation as an ally declines, more of Israel’s enemies may be prepared to challenge it, dubious as they will be about how the United States will respond. How can Israel take American pledges seriously, when even the United States’s oldest and closest allies cannot?

Finally, Israel has good reason to be unnerved by the articulation of a new America First doctrine, outlined most recently by White House Economic Adviser Gary Cohn and National Security Adviser H.R. McMaster in an op-ed in the Wall Street Journal, and exemplified by the Paris Accords decision. Cohn and McMaster describe a theory of international relations that is purely transactional and competitive. To state the obvious, such a model produces relations between nations that are inherently less stable, as the organizing structures of alliances that seek to advance common interests give way to a “winner takes all” mentality, even among friends.

But even more concerning, Israel has always defined its closeness to the United States, first and foremost, as reflecting and advancing the two nations’ common values. Not a speech is delivered by a senior US or Israeli official that does not include that phrase, which encompasses the key features of democratic societies. So what happens when values no longer animate American thinking about our relationships around the world? This shift may not bother Saudi Arabia, or Egypt or other Middle Eastern leaders Trump met with in Riyadh. But none of them are considered members of the community of democracies, and they can more easily manage a purely transactional relationship with Washington. Israel, a technology and intelligence powerhouse, is not without assets in such a competition. But if the common values are not prized, Israel will lose its special connection and status with the United States, and will find itself forced into agonizing dilemmas. Can Prime Minister Netanyahu be comfortable identifying with a Trump-led camp that includes Putin, Erdogan, and Duterte, but leaves out Merkel, Macron, and Trudeau? Frustrations with Europe on the Palestinian issue aside, no Israeli I know wants to have to choose sides between these camps.

The loss of US leadership on common values and global issues like climate change will also increase the possibility of divergence in US and Israeli positions, something Israel tries hard to avoid. Will Israel, an enthusiastic supporter of the Paris Accords, now feel pressure from the Trump Administration to withdraw? Could it possibly explain such a decision in terms of its interests, much less its values? What will be the costs to its relationship with the United States if it stands firm in support of the agreement?

For Israelis, seeing the United States set off on a course of alienating allies and sublimating values cannot be comfortable. Strains in the US-Israel partnership, and in Israel’s other key relationships, are nearly inevitable. Ironically, one possible bright side is that it could, in an odd way, result in Israel drawing closer to European nations, as they all try to forge a path together in a world where the United States is weaker, less present, and less reliable. But to even contemplate that possibility is to be stunned by how much Israel stands to lose from the international profile President Trump is creating for the United States.

Daniel Shapiro is a Distinguished Visiting Fellow at the Institute for National Security Studies at Tel Aviv University. He served as US Ambassador to Israel from 2011 until the end of the Obama Administration.

About the Author
Daniel Shapiro is a Distinguished Visiting Fellow at the Institute for National Security Studies at Tel Aviv University. He served as US Ambassador to Israel from 2011 until the end of the Obama Administration.
Related Topics
Related Posts
Comments