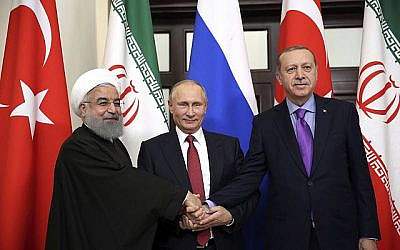 In recent years, Turkey’s  foreign policy has changed drastically.   For ages there has been  conflict between Turkey and Europe. Ancient Troy was in what is today’s Turkey. Most recently, they battled in World War I when Turkey, one of the defeated countries, had its Ottoman empire disbanded. In 1923 a group of Turks led by Ataturk established a new Turkish republic.  The new republic  was secular and oriented towards the West, a position which did not change for many years.

After World War II, Western nations  formed NATO  as a military barrier to Soviet aggression. Since Turkey is immediately south of the Soviet Union  it made sense to include Turkey in NATO, which NATO did in 1952.  There is still a NATO base in Turkey.

In 1974, Turkey began to abandoned the west by invading Cyprus. Turkey claims that  northern Cyprus is an independent country, a claim which no other country recognizes.  Even with friction between Turkey the West, Turkey attempted to maintain good relations with  Europe. For years  Turkey has tried to become a member of the European Union. So far, it has not been allowed to do so.

Until about ten years ago, Israel maintained good relations with Turkey, but changes in Turkey ended that. In the 2002 elections, the conservative Turkish Justice and Development Party (AKP), led by Muslim Recep Erdogan, came to power.

In 2010, relations between Israel and Turkey  fell apart completely when six ships  formed the “Gaza Freedom Blockade”, whose stated aim was to run Israel’s blockade of Hamas-controlled Gaza. The Israeli navy intercepted the flotilla and  landed troops on a Turkish ship, the Mavi Marmara. A fight ensued in which ten of the people attempting to run the blockade were killed and ten Israeli commandos were wounded. The ships did not breach the blockade, but the relations between Israel and Turkey have been openly hostile ever since

Over time, Turkey’s governmental policies have changed. Turkey no longer perceives itself as a secular nation. Now identifying itself as Muslim, Turkey has called on Muslims to unite against Israel.

Additionally, Turkey no longer views the West as an ally. It has entered into an agreement with Muslim Libya in an effort to take control of large swaths of the Mediterranean Sea and has made friends with Russia, from which it has purchased  S-400 missiles which can be used against Israeli planes. Because those missiles can interfere with American F- 35s,  the United States  has  withdrawn  its F-35s from Turkey. Turkey  is also working with Iran as an ally. Under these circumstances, the West should throw Turkey out of NATO.

Turkey is no longer the democratic state that it once was. Erdogan, though technically elected,  rules like a dictator.  In 2016, there was an attempt to overthrow Erdogan, but he suppressed it.  A series of purges followed in which hundreds of thousand of government officials, including members of the military,  were purged. In 2018, Turkey adopted a constitution in which the president is Turkey’s chief executive officer. Erdogan is the President. In July 2018, Erdogan consolidated his power discharging 18,000 governmental employees.

Under his leadership, Turkey has become virtually a police state. The press has been censored, You Tube, Twitter, and Wikipedia were blocked,  and prisoners have been tortured.  Recently, the judiciary was significantly weakened.

Erdogan does have allies. Turkey, Iran, and Russia  have agreed  to take control of areas of Syria, a move which President Trump helped to facilitate at Erdogan’s request by  removing American troops from northern Syria.

Since Trump’s election, Erdogan has had a friend in the White House. Despite Erdogan’s assault on democracy and  his close relationship with Hamas, in September, 2017, Erdogan and Trump met at the United Nations, where Trump introduced Erdogan as “my friend” saying, “He’s running a very difficult part of the world. Frankly, he’s getting high marks”.

In November, 2019, Erdogan went to the White House. There, Trump described Turkey as “a great ally in NATO.” Trump added, “I’m a big fan [of Erdogan]. I have to tell you that”.” Despite the fact that Erdogan allowed Hamas to plot attacks on  Israel from Turkey, Trump said, “We are grateful to President Erdogan and the citizens of Turkey for their cooperation in the struggle against terrorism. Trump added, “You’re doing a fantastic job for the people of Turkey”

In December 2019, Erdogan gave up all pretense of being part of the West. In a speech before the Organization of Islamic Cooperation, he called for unity among Muslim countries to confront the West and end the “oppression in Jerusalem.”

The relationship between Erdogan and Hamas is of particular concern. We know that Erdogan is a  Hamas supporter, as evidenced by the Mavi Marmara incident and the fact that he allows Hamas to operate from Turkey.

We also know that Hamas is trying  to take over the West Bank and may well do so in the near future. Since Iran, Hezbollah, and Hamas, have announced that they want to attack Israel from the West Bank, it makes sense that Hamas would be part of the Muslim coalition to destroy Israel which Erdogan is intent on putting together.

While Erdogan has been openly hostile to Israel and the West, when it comes to business , the West allows him to play both sides.  Together, the United States and Europe do hundreds of Billions of dollars a year in trade with Turkey.  Turkey is a member of Western trade agreements and still says it wants to be part of the European Union.  Erdogan  needs to be made to understand that there is a price to be paid for abandoning the West.  At the very least, Turkey should NOT be allowed to be a member of trade agreements with the West.

Though the United States needs to stand up to Erdogan, that is unlikely to happen so long as Donald Trump is President. One of the ways that Trump operates is to reward the people he perceives to be his friends, at least so long as he needs them. Trump has an economic incentive to help his “friend”,  as there are two Trump Towers in Istanbul.

After November 4th, Trump will no longer need Israel, but will need his “friend” Erdogan. What better way could Trump reward Erdogan than by hurting  Israel? If he loses, Trump will only have a little more than two months to reward Erdogan, but he can much in two months. If he wins, Trump will have four years to do so. If only there were a Trump Tower Tel Aviv, Trump  might still want Netanyahu to be his friend.

When Erdogan abandoned the West, he went over to the dark side. There is little the West can do about that, but the West can change its foreign policy accordingly.