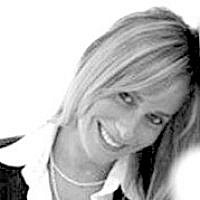 Operation Protective Edge has been generating lots of chatter. Many are complaining that there is way too much one sided coverage of the conflict, a slew of media bias and over sympathizing with the Palestinians. I received some interesting data today from the Ministry of Foreign Affairs that I thought would be of great interest to all of you following the conflict with abated breath, as you receive difficult to decipher data from Fox and CNN, the New York Times and many others.

And as the number of deaths and casualties grow on both sides, some topics you are not reading about from a micro perspective in the mainstream media, detailed information regarding humanitarian supplies being transferred to the Palestinians by the Israeli government.

Since the beginning of Operation Protective Edge on July 8th, 673 trucks have entered the Gaza Strip from Israel, carrying food, medicines and many other life-saving supplies, in addition to 4.5 million liters of diesel and fuel for Gaza’s power station and for transportation. All this even despite the fact that rocket fire from Gaza continues and tunnels are uncovered one-by-one, some even under humanitarian border crossings like Kerem Shalom. Today alone, Israel allowed the entry of 67 trucks and tankers into Gaza carrying food and fuel.

Israel takes matters a step further, repairing Palestinian infrastructure. In the past few weeks, Israel performed 24 repairs to infrastructure in the Gaza Strip: 10 electrical repairs, 10 water supply repairs, 2 sewage repairs, and 2 communication repairs. On Friday July 18th, two high voltage lines supplying electricity from Israel to the northern Gaza Strip were repaired, despite the dangers to which Israeli Electrical Corporation workers were exposed to due to Hamas fired rockets in the area.

Did I mention the Israeli field hospital set up at the Erez Border Crossing to treat injured Palestinians?

There has been shocking information revealed since the Gaza ground operation has begun regarding the more than twenty intricate tunnels discovered, particularly in the Sejaiya neighborhood, located to the Southeast of Gaza City.

The Sejaiya neighborhood, situated opposite Israel’s Nahal Oz and the Karni crossings to Gaza, is one of the closest residential points to the fence that separates the Gaza Strip from Israel. This where seven IDF soldiers were caught in a deadly ambush earlier this week. Six soldiers were killed and one soldier and the seventh soldier, Oron Shaul, appears to be missing in action. There is no definitive evidence of whether he is alive or dead. Sejaiya, a densely populated neighborhood is known to be one of the strongholds of terrorist activity against Israel and has been the scene of many confrontations with Israeli forces going back as far as the 1970s and continuing through the first and second Intifadas and Operation Cast Lead in December 2008.

Following the Hamas takeover of the Gaza Strip in 2007, Sejaiya became a Hamas stronghold. This followed confrontations and harassment of members of the Hils clan, allied with Fatah, who were forced to leave the area (some of them fled for their lives and found sanctuary in Israel).

Since the expulsion of Fatah from the neighborhood, there has been an ongoing rivalry between Hamas and Islamic Jihad. Each side tries to present itself as the leading force behind the “resistance” in the neighborhood by digging rocket-launching pits for attacking Israel and conducting other types of terrorist activity.

Today, the area is heavily patrolled and monitored by Hamas. It contains attack tunnels and many mosques that serve as arms stores, next to which pits have been dug to use as rocket-launching sites against Israel.

Here is a report from Al Jazeera that came out recently showcasing a tunnel not far from Sejaiya.

Hamas’ Use of Civilians as Human Shields

Hamas spokesman, Sami Abu Zuhri was interviewed on July 8th and called on the Palestinian people to use the human shield tactic to defend their homes: “We in the Hamas movement call on our people to adopt this procedure,” he said. (Source: Memri and Channel 10): 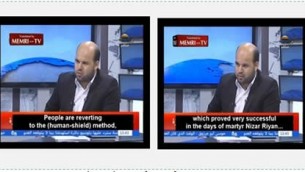 In the video the interviewer can be heard asking a question, which takes for granted the use of the human shield tactic. Abu-Zuhri embraces this method, saying it has proven to be effective time and again and called on the Palestinian people to continue to rely on it’s tactics.

Hamas’ Ministry of the Interior in Gaza issued an official announcement on July 10th to the residents of the Gaza Strip, telling them not to pay attention to IDF announcements about vacating their homes. The announcement calls “on our dear residents to reject these messages, not to vacate their homes and to conduct themselves calmly. Should the need arise, call the following toll free numbers” (Source: Facebook page of the ministry of the interior in the Gaza Strip, July 10, 2014): 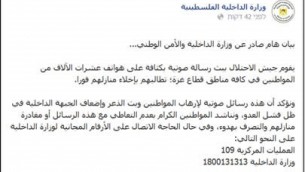 A similar announcement was issued by the Hamas authorities in Gaza on July 16th.

Hamas spokesman Mushir al-Masri called on the residents of Gaza on July 16th, not to leave their houses and to ignore the IDF’s warnings.

UNRWA, the UN’s Palestinian refugee agency, officially admitted on July 16th that it had found some twenty missiles hidden in one of its schools in Gaza.

A cartoon produced by Hamas calls on Palestinian civilians to form human shields against Israeli attacks. The cartoon depicts how a large group of civilians standing on the roofs of houses creates a metaphorical shield against incoming bombs, and praises the “steadfast people.” Cartoons are an important medium for influencing public opinion in Palestinian society: 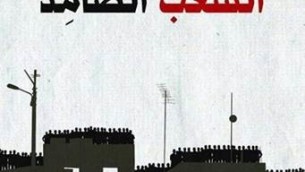 A Hamas propaganda video raving about the intended use of the Palestinian youngsters to throw hand grenades.

Hamas’ use of civilians as human shields– compilation of many elements.

Gaza terrorists use civilian ambulances for cover: this clip shows how the IDF called off an attack after the target entered an ambulance.

Hamas takes advantage of the fact that the IDF avoids attacking targets where civilians are known to be.

Israel is fighting two wars. The military war and the media war. You can’t do much on the military front, but properly arm yourself with the tools and knowledge you need to fight the media battle.