The Blogs
Taha A. Lemkhir
A voice from Morocco
Apply for a Blog
Advertisement
Please note that the posts on The Blogs are contributed by third parties. The opinions, facts and any media content in them are presented solely by the authors, and neither The Times of Israel nor its partners assume any responsibility for them. Please contact us in case of abuse. In case of abuse,
Report this post.

A picture taken on October 13, 2017 shows a view of a street in the “Mellah” Jewish quarter of the Médina in Marrakesh. Marrakesh is seeing its fortunes revived as visitors including from Israel flock to experience its unique culture and history. (Fadel Senna/AFP via Getty Images)

Last month, while walking through a labyrinth of little streets across the old Médina of the red city Marrakech, my eyes caught near the Mellah (the old Jewish quarter) a group of cheering Jewish men in their traditional dark attire, others were wearing kippah strolling with confidence and pride. I observed the scene closely. The normal reaction of the Moroccan merchants, passersby, and the ones enjoying their shots at café terraces. Then I entertained the thought asking myself if that was even imaginable (unescorted) in Egypt who signed a peace treaty more than forty years ago, or in neighboring Algeria. 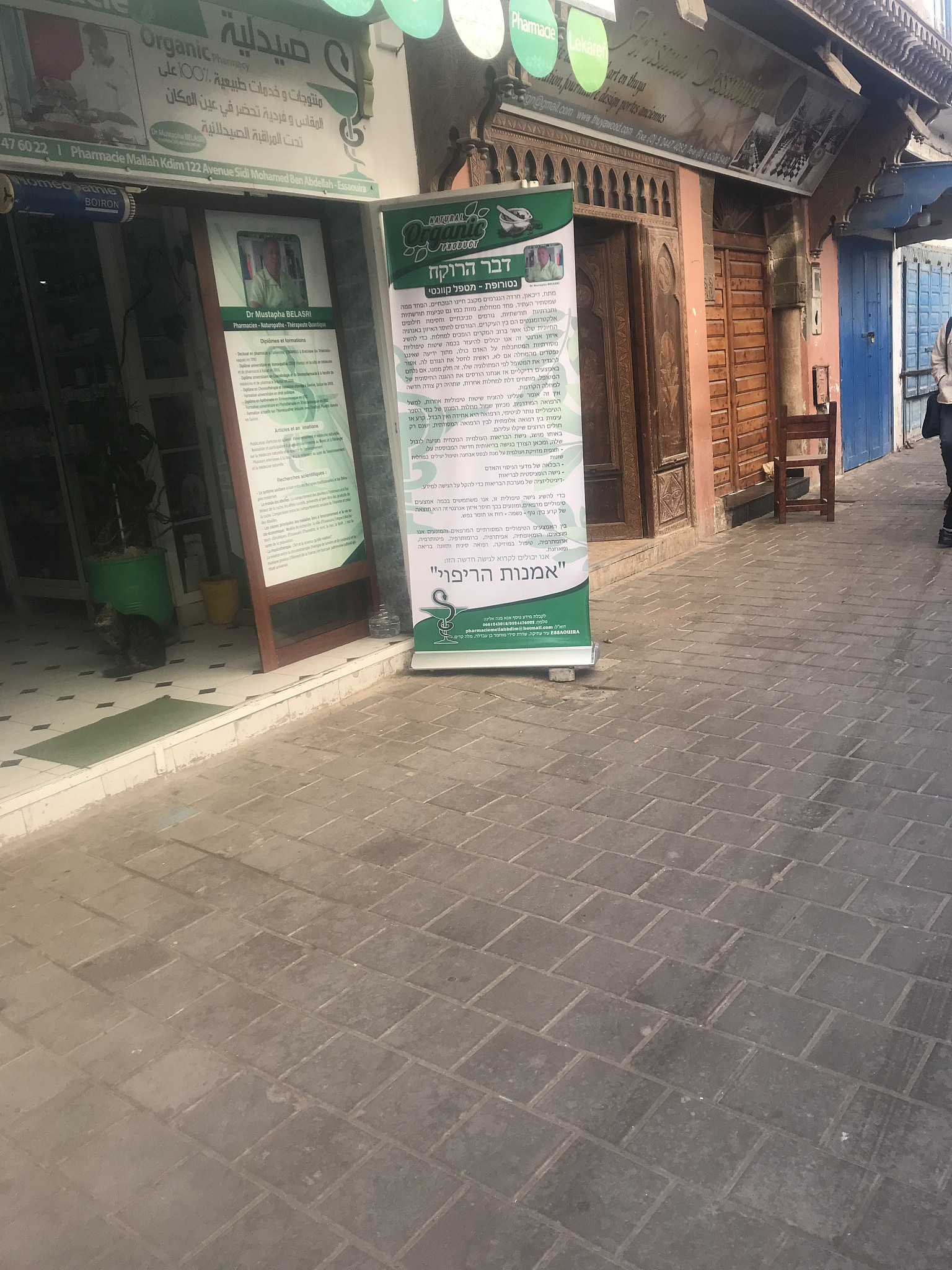 A picture I took of a local pharmacy last August in Essaouira, formerly Mogador, Atlantic port city, west of Morocco.

Everyone in the Mellah know the skilled glassmakers; the Jewish brothers who have been blowing glass their for decades offering good prices and quality products. And after the renovation of the old Médina, the Mellah regained its Jewish status, and the original Hebrew names of its streets and alleys reappeared again on the streets’ signs.

The Jewish community in Morocco is playing a great role in revamping the image of Israel among Moroccans, and Israelis from abroad has become more and more visible; their voices are reverberating throughout the social media and their presence in the social events is on the upgrade.

Since my last published article on the Blogs more than a year ago a lot has happened concerning the amazing evolution of the nature of the relationship between Israel and half a dozen of its Arab neighbors.

Now one could see clearly the diplomatic progress that has been made, and that a brand new horizon is looming behind the iron curtains of hatred that stood unwaveringly for decades long preventing the nations of the MENA region to develop any significant relation with the Hebrew state.

As far as my country Morocco is concerned, the ongoing cooperation and the newly established formal economic and military ties is nothing but a breakthrough in the world of Middle Eastern politics— considering the heavy dogmatic capacity and the fierce resistance that the kingdom of Morocco is facing from its Pan-Arab and Islamist counterparts in the Arab world.

However, it’s not only some member states in the Arab League, like Algeria, who are extremely enraged with this —overt and official this time— srategic rapprochement between Morocco and Israel, but also the old colonial powers in the European Union who are somehow feeling that the U.S. and Israel are threatening their interests in North Africa, emboldening the Moroccan diplomacy, and taking over their old colonies.

And with the circulating news of military cooperation and the intention of Israel to help Rabat build kamikaz drone sector in Morocco, the Europeans are willing to go even further in their retaliation as to cancel major economic deals with the Kingdom like the newly scrapped fisheries and agricultural treaties by the EU’s top court.

As the U.S. to Israel, for Morocco, the benefits of an honest and fraternal relationship with the Hebrew state greatly outweigh the benefits of its relationship with the totality of the 22 Arab states including the rich Gulf countries. And the quality of the services Israel has offered for years to the Alawite dynasty under wraps bears witness to what could be achieved if this affinity is turned into alliance.

A kind of cooperation that would help Morocco modernize its army, emerge as a regional power, develop its fragile democracy and strengthen its stance in front of a rich, arrogant bloc in the north.

About the Author
Taha Lemkhir is a Moroccan writer and photographer. Degree in Arabic literature and Islamic studies. Critic of Islamism. languages: Arabic, English and Spanish. He Lived part of his life as an Islamist— until enlightenment flashed through his heart.
Related Topics
Related Posts
Comments