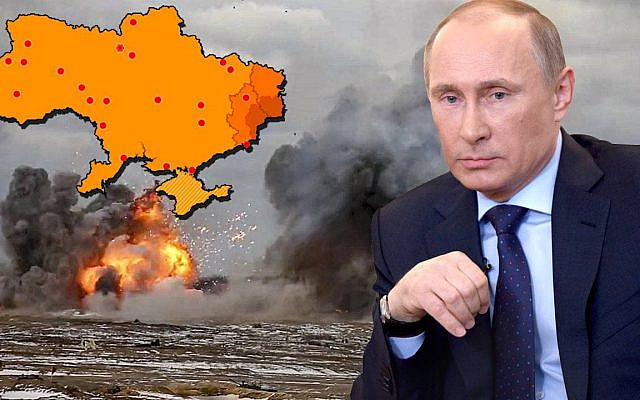 The weakness and confusion of Western politicians against Russia has become so apparent that Putin has occupied Ukrainian territory with all its global criticism of its military might. Vladimir Putin, who sees himself in the awe of the 21st century tsar with the desire to revive the Russian Empire. ? In the eyes of the international community – Westerners – without any effective practical reaction or deterrent, he considers himself victorious.

Putin, who sees a huge weakness in the NATO-led opposition, is thinking of expansion, and this is not just a matter for Ukraine, but for this great danger awaiting other countries. He consciously has a big strategy in mind by accepting any sanctions against himself and in view of the European energy crisis. That is why the Foreign Ministries openly threatened Russia, Sweden and Finland if they considered joining NATO.

All the evidence shows that Putin has the other both sides of the story; China, who controls the world economy and market, and the terrorist Islamic Republic of Iran, which is seeking nuclearization, and can use long-term appeasement of westerners, to conquer other countries.

اIn fact, Russia’s military invasion of Ukraine is a deep wound that has been inflicted over the years by Westerners for wanting short-term profits and refusing to pursue the right policies. With this profit-making mindset, today China, through the economy and the market, controls most of the countries and has acquired parent companies in many countries. At the same time, Putin, in his quest for power by using the Islamic Republic card as a newcomer and also under China’s card, with jihadist insurgencies in various countries and nuclear threats, promises a dark future for the West. If strong and unrelenting force is not contained, this time Hitler will devour the world with his economic, military and jihadi-nuclear strategy.

The occupation of Ukraine is the result of a series of mistakes made by European and American politicians in recent decades that have accumulated so much, that they are now unable to find a solution and even today are unable to provide immediate assistance to the Ukrainian people. Fear of Putin’s threats and passivity has led them to resort only to television cameras to mention the tragedy. Meanwhile, the only country that has resolutely opposed Russia is the British government, and the rest of the world is trying to support the Ukrainian people with calm therapy.

The United Nations, on the other hand, has become an economic family club, and all it does is, every so often issues a statement against the Israeli government. This passive institution is not capable of making a decision today in the face of this great humanitarian catastrophe. Meanwhile, if one of the terrorists of Hamas and Islamic Jihad is killed or wounded in the attack on Israel, it will defend them by issuing a statement, and various anti-war groups come to streets of Europe.

We should not forget, when George W Bush Iraq, millions took to the streets of Europe and the United States to protest, and now the question is, where are those anti-war social warriors and groups like BLM? Aren’t the Ukrainian people worth defending or is it not economically viable for them?!

Israel is now the only country that has truly and genuinely done humanitarianism for the people and government under Putin’s aggression, and even Prime Minister Naftali Bennett has offered Israeli humanitarian aid to President Mr. Zelensky.

At present, Hungary and Poland are the countries that have officially welcomed the Ukrainian refugees from the very first day. The same countries that most left-wing politicians in the European Union refer to them as extreme right-wing states. But, the European Union itself is unwilling to provide humanitarian aid across the Polish-Romanian border.

After much criticism of the process of dealing with Russia’s invasion of Ukraine, the EU member states were finally forced to withdraw their appeasement and putting pressure by closing the airspace as well as imposing various banking sanctions – Swift – along with military aid to the Ukrainian army to formally confront Putin.

Ultimately, what matters in this one-sided war is to pursue the right policies. Europe is at an impasse with Russia, and Putin has the upper hand due to political weakness and energy. Ending the policy of appeasement with the Islamic Republic in Iran and regime change with the widespread support of disgruntled people in Iran, who have long shielded themselves from the corruption and oppression of the ruling regime in the face of repressive bullets, is the only option. As well as keeping the West away from an unwanted war, it will be safe in terms of regional and global energy and stability, and will also disrupt Putin’s expansionism plan.