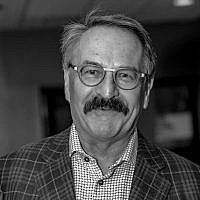 The Blogs
Lubomyr Luciuk
Apply for a Blog
Advertisement
Please note that the posts on The Blogs are contributed by third parties. The opinions, facts and any media content in them are presented solely by the authors, and neither The Times of Israel nor its partners assume any responsibility for them. Please contact us in case of abuse. In case of abuse,
Report this post.

Ukraine is not new. As my colleague Professor Paul Robert Magocsi recently demonstrated in an incisive essay, Ukraina Redux, Ukrainians have attempted to forge a state of their own over several centuries. Repeatedly their struggle for independent statehood has been thwarted by predacious, indeed rapacious, neighbors. This first happened in the 17th century, then several times in the 20th. And it’s happening again.

Despite this undeniable historical record, Ukrainians have, often as not, been told they don’t exist, have never existed, and, more alarmingly, should not exist. Nay-sayers have sometimes insisted Ukraine was nothing more than an Imperial German construct, staged during the First World War to undermine the Tsarist Russian Empire. Others claim Ukraine was Lenin’s project or maybe wasn’t even truly around until Stalin crafted it in the wake of the Second World War.

Confusingly, Vladimir Putin, the KGB man in the Kremlin, has claimed he “respects” Ukrainians even as his legions deliberately target Ukraine’s civilians and infrastructure. This is the same fellow who, not long ago, spouted off about how the Ukrainian state has no raison d’être as so-called Ukrainians are nothing more than misguided “little Russians.”

After delivering that epistle Putin assigned himself the duty of dragging them back into a supposed Russian Mir (obviously without much success). And, lest this commentary seem too partial, don’t forget the many Western specialists who blathered on about how eastern Ukraine’s Russian-speaking inhabitants were Moscow-oriented, not at all patriotically Ukrainian. Reality has demonstrated otherwise. What many predicted would be a 100-hour war has become a Ukrainian war of independence. Those of Putin’s ilk who didn’t think Ukraine exists now know better.

Ukraine returned to its rightful place in Europe with the disintegration of the Soviet Union in 1991. Soon thereafter, trusting in what they believed were the guarantees of the USA, UK, and yes, even the Russian Federation, Ukraine gave up its nuclear arsenal, assuming that would ensure their country’s territorial integrity and political independence. They have since learned otherwise, the hard way. At the time I tried to warn them about their naiveté but they didn’t listen. The 1994 Budapest memorandum has since proven to be a guarantee of nothing at all. If Ukraine had retained even a few tactical nuclear weapons Moscow’s men would not have been so cocksure in planning their genocidal war of aggression against Ukraine and Ukrainians, nor would Putin today be trying to bully the world by threatening Armageddon. Meanwhile, countries like North Korea, Israel, Pakistan, India, and perhaps even Iran, have been reminded of why disarmament is for dummies.

Ever since the happy day that the Soviet empire exfoliated, many countries once described as the “captive nations” of the USSR and Warsaw Pact have voluntarily joined the European Union and NATO. This was not the result of some nefarious geopolitical conspiracy, nor did this growth represent any kind of existential threat to the Russian Federation. What actually happened was that the “east” came “west,” quite willingly, indeed anxiously, doing whatever was necessary to escape the clutches of the Kremlin. Doubt me? Just ask a Pole or an Estonian whether they miss the “good old days” of Soviet domination. Then question a Georgian about whether her country should join NATO. The answer is yes. And just this June Ukrainians celebrated the good news that their country has been accepted as an EU candidate member.

Haven’t Ukrainian sacrifices since then also earned them a place in NATO? That is what President Zelensky said a week or so ago when Ukraine applied for an accelerated admission. Thankfully, several NATO member countries, including Canada, Poland, and the three Baltic states have expressed support. As for Russian sensitivities on this issue – ignore them. Moscow shouldn’t have a say about what Kyiv does, because Ukrainians aren’t Russians, never were, never will be and have every right to decide their own fate. Once in NATO they will repay the Free World by continuing to defend the gates of Europe, a battle-tested bulwark blunting the designs of a rogue Russian state that will itself remain beyond the pale of civilization for years to come. Unless, of course, the Russians have a real revolution and rid themselves of those who led them into perdition. If that ever happens Russia might still be redeemed. But I’m not hopeful.

About the Author
Born in Kingston, Ontario, the son of Ukrainian political refugees, Lubomyr was educated at Queen's University, the University of Alberta and, since 1990, has been a professor of political geography at The Royal Military College of Canada. He is also a Fellow of the Chair of Ukrainian Studies at the University of Toronto and, in 2019, was distinguished by President Volodymyr Zelensky with Ukraine's Cross of Ivan Mazepa. In 2022 he was declared a persona non grata by the Russian Federation.