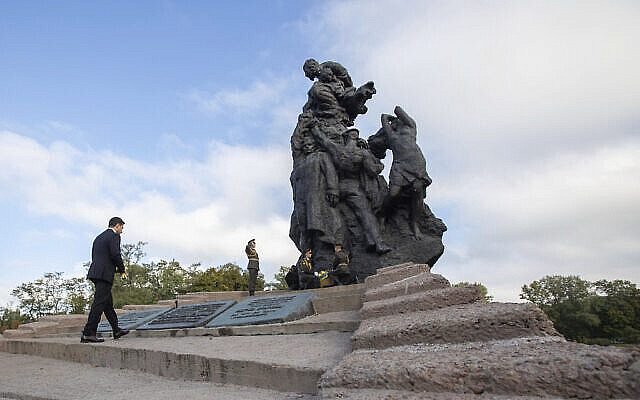 Ukrainian President Volodymyr Zelensky attends a ceremony at the monument to Jewish victims of Nazi massacres in Ukraine's capital Kyiv, Wednesday, Sept. 29, 2021. The ceremony commemorated the 80th anniversary of the Nazi massacre of Jews at the Babi Yar ravine, where at least 33,770 Jews were killed over a 48-hour period on Sept. 29, 1941. (Ukrainian Presidential Press Office via AP)

Ukranian soil is drenched with Jewish blood. This is a common perception. I have heard this time and again on my annual pilgrimage to Ukraine, over decades. Jews are faithful to the memory of their suffering and they are well aware of how much they have suffered in Ukraine. I have visited some of the places where horrors against Jews took place: Babi Yar, mass graves in Uman, and more. Patrick Desbois, a Catholic Priest, who has found a personal calling in retrieving lost memories of the Shoah in Ukraine, speaks of “Holocaust by bullets”. According to his estimate, one million and half Jews were murdered by Ukranians during the Shoah. Nor is antisemitism a matter of the past in Ukraine (sadly, this is now a worldwide reality). While some countries, notably Germany, have taken stock of their past and engaged in repentance, education, and goodwill efforts to ensure the horrors of the Shoah and antisemitism are uprooted, countries in the former soviet block have not undertaken such educational efforts. Ukraine has never fully confronted its past.

It therefore made perfect sense when my cousin Zak turned to me with the following query:

I’m praying for shalom in Ukraine, however nobody seems to bring to the table that the Ukraine as a nation has a massive national surplus of sins which they never did teshuva for. Shouldn’t that be part of the conversation?

Zak is wrong. Not about the surplus of sins, but about no one bringing this to the table. A glance the religious Zionist website Srugim will reveal several opinion pieces on this matter. In a position reminiscent of Menachem Begin’s famous wish of success  to both parties in the Iran-Iraq war, Rabbi Shlomo Aviner avers that both sides in the Ukraine-Russia conflict are wicked.

We should therefore avoid taking sides. All we can do, as my cousin Zak did, is to pray for peace.

I wonder from what depths of the heart a prayer for peace can emerge, when at the forefront of one’s mind is the view of both parties as wicked. Indeed, it seems representative of broader attitudes that prayer is oriented to the safety of Jews, not to the overall situation. Thus, the call of the Chief Rabbinate to add psalms to daily prayer, for the safety of Ukranian Jews.

One can’t fault Jewish leaders and thinkers for their faithfulness to the memory of Jewish suffering. One cannot, and should not, forget all that has transpired on Ukranian soil. Nevertheless, one can aspire to a higher and broader vision and one can certainly find fault with the kind of mentality expressed in the quotes above, representative of broad sectors within Jewish society.

Implicit the views quoted above is the idea that the present suffering of the Ukranian people is a punishment for past deeds. It is a commonplace of certain Jewish teachers to “play God”, that is: to account for historical events in line with principles of reward and punishment. We have seen it time and again in the Israeli context. Certainly: “there is justice and there is a judge” as the Talmud states. But do we really possess the tools to follow divine justice? If both sides are wicked, as one can readily argue from history, then why is one side suffering? And why are the Jews suffering together with the rest of the Ukranian people? And who gave this or that rabbi the keys to divine justice, to account for the miseries of history in line with divine justice? Is it not, rather, the all-too-human need for revenge that clothes itself in the quest for divine judgement that leads us to view the present situation through the lens of Jewish suffering? I believe anyone with religious or theological sophistication will reject a facile connection between deeds of  history and the present unfolding of historical processes. After all, it is for this very reason that attempts to  account for the Shoah in terms of the sins and behaviors of the Jewish people, or parts thereof, are so distasteful. Theologically, one of the lessons of the Shoah is to surrender our petty book-keeping and the hubris of accounting for God’s actions.

Attachment to past pain also blinds us from appreciating the particularity of the moment. One lives in the past, failing to recognize all that is unique to the moment, and all that would call for our engagement – both practical and spiritual. We usually take pride in Jews and their role in world history. There are at present, globally, two Jewish prime ministers. Volodymyr Zelensky is the “other” Jewish prime minister. At this moment in time, he is hailed by some as leader of the free world, possibly the most popular political leader around. Why do the voices cited above not make room for this game-changing fact? Indeed, the “us vs. them” mentality that pits Jews against their enemies is the wrong paradigm for the moment. Jews are part and parcel of the battle for Ukraine. This is true for the Jews living in Ukraine, for the Jews fighting for Ukraine and for the Jews, worldwide, who have a stake in this war. And, and here is the most vital consideration – the war is not a war between Ukraine and Russia. It is a war between two modalities of being, two approaches to power, two visions of humanity, ultimately – between light and dark, good and bad. As Yuval Noah Harari states: “The war in Ukraine will shape the future of the entire world. If tyranny and aggression are allowed to win, we will all suffer the consequences.” A broader vision of the moment requires us to see past Jewish historical pain. I believe a true “Jewish” view is one that considers the moment in its complexity and seeks out the higher meaning in divine will.

If prayer is our means of addressing the moment, as the rabbis cited above seem to agree, our prayer must be informed by the fuller meaning of the moment, not only by the narrower concerns of the Jewish people, present or past. To me, this means the following. If a battle is going on between forces of good and evil, we must take not only the side of one party whom we consider to represent the good. We must take the side of God. What this means is first and foremost praying for the protection of all, Jews and non-Jews, Ukranians and Russians, neighboring countries, the world at large. The Russian people are as much victims of Russia’s leadership as the Ukrainian people are victims of its actions. We must pray for the emergence of a better humanity and a better world through the toils of the present war, as indeed through the toils of all wars and all suffering. We must hope for higher understanding, rising beyond personal and national ego. We must aspire to compassionate behavior, rather than the ruthless and selfish forces that are unleashing destruction. We can, at this moment, affirm a deeper commonality across humanity, a commonality that is emerging in unexpected and surprising ways, as the crisis unfolds and as the world stands with Ukraine. And, in this vision, there is also room for revisiting past attitudes and past wrong-doings. With higher vision and growth in compassion and understanding, the possibility for repentance and transformation opens up, not to one side among warring parties, but to all. Let us not play God and mete out his judgement. Let us, rather, pray for the higher divine ideals that we recognize as God’s goals for humanity. This moment in time is an invitation to gain a higher vision.