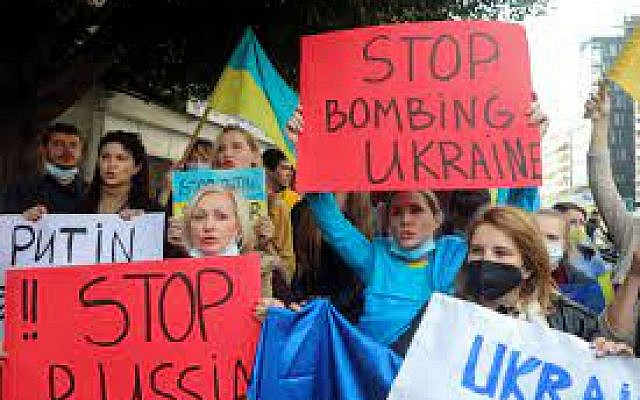 Demonstration against Russian attack on Ukraine

One’s heart goes out to the men, women and children caught up in the devastating and unprovoked attack on their country by their powerful and greedy neighbour. The sight of women carrying children as they tramp along frozen roads and fields in an attempt to find shelter and safety is truly heartbreaking. The scenes of destroyed buildings and rubble-filled streets cannot fail to elicit our sympathy and pity.

Ukraine is the place from which my husband’s family originated. When just-married Rachel and Mordechai Shifris left their homeland and families in the early 1930s, having met on Hachshara in Lvov, they came to what was then Palestine as Halutzim. They both left extensive families behind which they were never to see again.

Ukraine, or the part of the world known variously as Galitzia or Poland, had been soaked in the blood of Jews for many years. The Nazis who invaded and conquered the territory in WWII had no difficulty in identifying, rounding up and murdering Jews. The local population was only too happy to help. The history of anti-Semitism in Ukraine and eastern Europe in general, goes back a long way.

I’m not trying to pin the crimes of their ancestors on the current generation of those now being forced to flee, but I find it hard to detach my view of current events from my knowledge of those of the past. The czars of Russia, who ruled most of the surrounding area, were notoriously anti-Semitic, confining Jews to the Pale of Settlement, and preventing them from participating fully in civic life. The Orthodox church did nothing to stop pogroms and bloodshed, even encouraging the local communities in their murderous rampages.

The Ukrainian nationalist leader, Simon Petliura, was at the forefront of the political movement agitating against the Jews in the early part of the twentieth century. Instigating pogroms all over Ukraine in the name of Ukrainian nationalism, he caused the deaths of many thousands of Jews, the destruction and theft of their property, accompanied by unrestrained assaults on women and children.

A few years ago I picked up a book entitled ‘Adieu Volodia’ at a second-hand fair in central France. This turned out to be an engaging novel (in French) by Simone Signoret describing the lives of immigrants from eastern Europe in Paris in the 1920s. Little did I imagine that I would be thrust into the heart of the struggle of Jews to escape the hardships of their former In the book I read that the arrival in Paris of Petluria caused consternation and fear among the capital’s Jewish denizens, and it was only his assassination by a Jewish gunman called Sholom Shwartzbard there in 1927 that allayed their fears. The Volodia of the title was a cousin of one of the main characters who was killed in far-away Ukraine.

My sister-in-law, who belongs to a group of people in Israel who keep alive the memory of Chortkow, the town in Ukraine from which their families originated, visited the area with the group a few years ago. She found neighbours who remembered her parents’ families, but of course there was nothing material to recall where they had lived and what they had once possessed. Her opinion of Ukraine and the Ukrainians is far from sympathetic, and I’m sure that many people whose families originated from that part of the world are in agreement with her.

So, while I wish no ill to the unfortunate inhabitants of current-day Ukraine, the shadow of the past refuses to leave me. Today the refugees are ordinary folk, just like you and me, who have been forced to leave their homes in order to seek safety. But not so long ago it was our kith and kin who had to run away or be killed by their neighbours and countrymen.