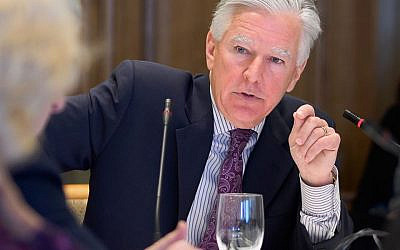 Marty Meehan, President of the University of Massachusetts. (UMass Photo)

I am starting to feel sorry for Marty Meehan, the president of the University of Massachusetts. He makes more than $650,000 a year to lead the UMass system, but his job is looking more and more like that of a glorified babysitter who has to spend most of his time keeping semi-literate children in line.

And when I say “children” I’m not talking about the students who take classes in the UMass system, but the faculty hired to instruct them.

Somebody needs to give these folks a lollipop, a rattle and a book of grammar.

Once people start paying attention to what UMass faculty are doing in the classroom, you can always count on a few of them to throw a tantrum. And when I say “tantrum,” I mean write a whiny self-serving faculty letter that reveals just how juvenile and disconnected from reality they are.

On Monday, Nov. 4, 2019 about 40 faculty members from UMass Boston issued a letter to Kumble Subbaswamy, the chancellor at UMass Amherst, condemning him for speaking out against BDS, a political movement that is turning college campuses into bastions of anti-Jewish contempt. He condemned BDS in response to an anti-Israel event organized by Sut Jhally, chairman of UMass’s communications department.

I’m not much of a copyeditor, but the letter written by UMass Boston faculty members is, to put it mildly, pretty badly written. It was signed by 40 members of the UMass Boston faculty, including several English teachers. Neverthless, it includes a number of embarrassing typos, meaningless filler and at least one run-on sentence.

It declares for example, that “We want to urge you to rescind—or at the very least clarify—some of the most problematic language in your statement, language that works to intimidate and delegitimize members of your own community.”

I think I feel like I want to urge them to obtain for themselves a copy of Elements of Style by Strunk and White so they can learn how to write more better, but I’m afraid that if I did, I would be accused of being a tool of the colonialist, imperialist oppressor class.

Muddy writing aside, the main thrust of the letter is that BDS is not the malevolent force on college campuses that Subbaswamy suggested it was because many Jews are involved in the movement. (It’s a form of the “some of our best friends are Jews” evasion.)

The letter does not address the data provided by the AMCHA Initiative documenting the connection between BDS resolutions and acts of hostility toward Jews on college campuses.

People who know what’s going on at UMass Boston won’t put too much stock into the letter.

In 2018, three finalists who had applied to serve as the school’s chancellor dropped out after a faculty committee declared that none of the three applicants were worthy of the job. (Talk about dodging a bullet!)

The school is still looking for a new chancellor.

Maybe they should put the job posting on LinkedIn!

I wouldn’t touch the job with a 10-foot pole.