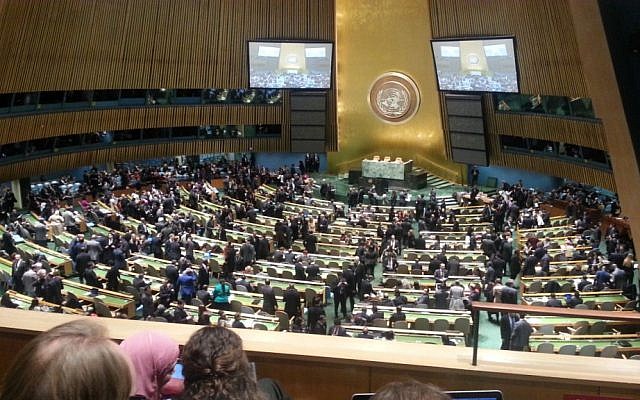 The truth comes out when we think no one else is listening.

On Thursday a United Nations interpreter, unaware that her microphone was on, uttered words of truth in reaction to the General Assembly’s adoption of nine politically-motivated resolutions condemning Israel, and zero resolutions on the rest of the world.

Under the mistaken impression that she was speaking only to colleagues, the interpreter uttered the following words into the headphones of every UN delegate, and before a live webcast audience worldwide:

“I think when you have… like a total of ten resolutions on Israel and Palestine, there’s gotta be something, c’est un peu trop, non? [It’s a bit much, no?] I mean I know… There’s other really bad shit happening, but no one says anything about the other stuff.”

Laughter erupted among the delegates. “The interpreter apologizes,” said the unfortunate truth-teller, moments later, followed by her audible gasp. I sincerely hope she won’t get fired.

Because the one who should really apologize today is the UN. Founded on noble ideals, the world body is turning the dream of liberal internationalists into a nightmare.

For by the end of its annual legislative session next month, the General Assembly will have adopted a total of 22 resolutions condemning Israel—and only four on the rest of the world combined. The hypocrisy, selectivity, and politicization are staggering.

Today’s nine resolutions, adopted by the GA’s 4th committee, which is comprised of all 193 UN member states, condemned Israel for violating the human rights of Palestinians in the West Bank and Gaza, of Palestinian refugees, and even of Syrians in the Golan Heights.

That’s right: the UN adopted a resolution today that mentions the word “Syria” no less than 10 times—yet said nothing of Syrian President Bashar al-Assad’s massacre of more than 100,000 of his own people.

Entitled “Occupied Syrian Golan,” the resolution condemned Israel for allegedly mistreating Syrian citizens in the Golan Heights. Israel was also condemned for violating the rights of Syrian citizens under international humanitarian law. The UN found no time today, however, to comment on the international legality of President Assad gassing his own citizens to death.

As it will soon do again by a second, redundant resolution on the Golan, the General Assembly today called on Israel to hand over the Golan Heights, and its citizens, to Syria.

Now, whatever one’s view on who rightfully owns the Golan, for the UN at this particular moment to call for anyone to be handed over to Assad’s rule—even as his massacres continue unabated—is both logically absurd and morally obscene. With Israeli hospitals now treating dozens of Syrians who escaped their country’s bloodbath, the resolution is simply surreal.

It is well and good to hold Israel to account for its treatment of Arab and other minorities, just like every other nation.

Yet something is wrong when not a single word in today’s Palestinian-themed resolutions mentioned the genocidal anti-Semitism expressed regularly by Hamas organs in Gaza, or the dangerous incitement by the Palestinian Authority in Ramallah, whose official schools, mosques, newspapers, and TV stations continue to glorify the murderers of Israeli civilians as heroes worthy of emulation.

Word is father to deed. Yet none of today’s UN resolutions concerning the West Bank mentioned the outburst of Palestinian terrorist attacks over recent weeks, such as the brutal murder of Shraya Ofer outside his Jordan Valley home, as his wife managed to escape. The murder of Ofer by axes and iron bars was “a gift to the Palestinian people and Hamas prisoners, in honor of Eid al-Adha,” the two suspects said under questioning.

By turning a blind eye to Palestinian incitement and terrorism, the UN resolutions promote a one-sided narrative that gives a free pass to Hamas, Islamic Jihad and the Palestinian Authority, encouraging intransigence instead of compromise.

It is the UN, therefore, who should apologize for misusing the world body’s precious time and resources to produce politicized and polarizing texts that do nothing to advance Arab-Israeli peace, or to further the genuine protection of human rights. On the contrary, the selective and one-sided resolutions undermine the core principle that human rights standards are universal, and they push the parties further away.

It is the UN who should apologize for using Israel as a scapegoat, for demonizing and delegitimizing the Jewish state as a meta-criminal to be blamed for all of the world’s ills.

And, above all, it is the UN who should apologize for ignoring the cries of the world’s millions of genuine human rights victims—and for mocking them.

Last week I was at UN headquarters in New York with courageous human rights dissidents from China, Cuba, Russia and Saudi Arabia. UN Watch helped organize a press conference to plead for UN member states to oppose those repressive regimes’ cynical candidacies for seats on the UN Human Rights Council. Yet despite their abysmal records, these serial human rights abusers were all elected by the UNGA, to become the world’s newest judges on human rights.

Needless to say, this same UN assembly will not be passing any resolutions this year on China’s subjugation of the Tibetan people or its imprisonment of pro-democracy activist Wang Bingzhang, on Cuba’s violent harassment of journalists and bloggers, on Russia’s persecution of gays, or on Saudi Arabia’s laws banning women from driving and non-Muslims from practicing their religion.

Nor does the UN plan to say a word on religiously-motivated attacks on civilians in Iraq, Nigeria or Pakistan, or on the persecution of political dissidents in Uganda, Vietnam, or Zimbabwe.

As the interpreter noted today, there truly is a great deal of terrible things happening around the globe, but sadly, at the UN, “no one says anything about the other stuff.”