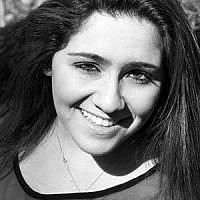 The Blogs
Shayna Friedman
Apply for a Blog
Advertisement
Please note that the posts on The Blogs are contributed by third parties. The opinions, facts and any media content in them are presented solely by the authors, and neither The Times of Israel nor its partners assume any responsibility for them. Please contact us in case of abuse. In case of abuse,
Report this post.

Members of the Reserve Service of the Israeli Defense Force are called back to duty, sirens sound throughout Israel, rockets and missiles rain down, Israeli citizens across the country run for cover in bomb shelters, and I remain aware and mindful of the devastating effects of attacks simultaneously striking the residents of Gaza.

This past spring I took an Israeli-Palestinian conflict course, directed by the organization World In Conversation. Each week my class would Skype with Palestinians in Gaza and Israelis in Israel to discuss the day-to-day lives of each people and to gain a better understanding of the Israeli-Palestinian conflict. I took away from this class the ability to question each preconceived idea that I held in regards to the conflict and gained the tools necessary to understand that the best opinions are those that are formulated based on ones own personal experiences and conversations with those directly involved in the conflict.

Now visiting Israel for the 4th time and spending the past two and half months here, immersed in Israeli culture, I have observed and experienced for myself from an (often uncomfortable distance), the rising violence and danger in Israel as a result of the constant rockets being fired by Hamas militants. After weeks of escalating events, both Israelis and Palestinians have come to use violence and destruction as a wake up call to the other, making the statement that neither people will stand for the injustice they feel has been inflicted upon them.

Running to a miklat (bomb shelter) everyday for the past three days and living in the reality of the uncertain and ever-present danger has opened my eyes to both hatred and humanity in times of crisis.

The Israeli-Palestinian conflict calls for citizens in each society to choose sides, and to reject whomever is seen as being the other. Therefore, in order to stifle the constant strain, members of society go along with the prevailing sentiment in the community which one resides to avoid rejection and to feel accepted as part of the in-group.

Throughout my course on the Israeli-Palestinian conflict, I came to find that understanding the Israeli-Palestinian conflict is based on the ability of a person to separate themselves from their biases and from the side, which that person would otherwise take. Instead focusing on listening and empathizing with the opposing view, and thereby acknowledging the reality in which the other side lives is key in understanding the other perspective.

I am aware that understanding the perspectives of others can only go so far in resurrecting a solution, for how can everyday civilians even begin to empathize with the other side, when society conditions each side to fear the other? The outright truth is that without open-mindedness and acceptance being omni-present in one’s society, the social stigma placed on an individual for rejecting the norm is just not worth going against the grain, only to receive backlash from ones friends and family. The reality of the matter is that it could be those people who are shunned by their communities and told to keep quiet with their non-conforming and innovative ideas that could be the people who are the ones capable of finding a resolution to this conflict. If only these people were supported instead of pushed away so that they are not to be heard by the masses, would they have the guts to speak out!

Echad, shteim, shalosh – three rockets strike Jerusalem, a mother cradles her small child, whispers of prayer fill the miklat, everyone wonders where the missile landed and if everyone is okay, other Israeli’s go about as normal, ignoring the sirens and missiles all together.

When there is immanent danger, it is the harsh reality that the average person is not interested in talking; they’re not interested in discussion, or working things out with their words. Rather the parties involved with the disagreement are interested instead in getting straight to the point and getting the message across to their enemy in the clearest way possible. However, it is only rational and clear communication that can and ever will be the resolution to solving any problem, as there is no problem that can’t be solved through dialogue, no matter how severe.

The Israeli-Palestinian conflict deserves a real conversation that can only be had if each side is able and willing to make the difficult transition of separating themselves, if even for a moment from the us vs. them mentality. If and only if in every action and in every reaction that transpired between Israelis and Palestinians, each group imagined the validity of the other sides perspective, the way in which we went about resolving conflict would without a doubt be handled with more empathy and understanding.

The suffering and heartache felt by both Israelis and Palestinians cannot be reconciled by simply brushing off each casualty as the others’ misfortune. The blame game is futile when each side has been present for the pain and long-standing anguish that the other has endured.

Ultimately, pressures from society to view each group of people as the other, inhibits both groups of people from empathizing with real human beings on the other side of the conflict.

Through conversation and dialogue each side is given the opportunity to overcome this reality and for uninformed citizens to question and formulate their own opinions based on real experiences rather than ideas that society depicts of what truth is in the matter of the other.

Choosing a side in conflict allows for feelings of acceptance and alleviates the social stigma and social pressures that come from being considered as the outsider who cannot comprehend the gravity of the situation nor absorb what is going on.

It is the ill fortune that members of both Israeli and Palestinian societies find comfort in alienating not only each other but also those in their societies who seek to learn more about the conflict through understanding both sides. In doing so, this provides comfort to the alienator only, by feeding their nationalistic pride and faulty sense of self.

As human beings given the choice of free will, it is my hope that one day instead of choosing sides, we’ll choose each other.

About the Author
Shayna Friedman is the Social Media Manager at the Jewish Federation of Greater MetroWest New Jersey. A recent graduate from Penn State University where she grew the Student Supporting Israel chapter, she works towards navigating the Social Media realm, exploring what it means to be Jewish and to support Israel in America.
Related Topics
Related Posts
Comments