When I was 17, I lived in Jerusalem for half a year in the German Colony neighborhood filled with picturesque Templer homes.  I was participating in an intensive youth leadership training program with 95 other young Jewish youth leaders from around the world.  This was before 1967, the war, and the unilateral “unification” of the city. There was no access to the Western Wall and all of the other Jewish, Muslim and Christian sites in and around the Old City.  And it was wonderful. 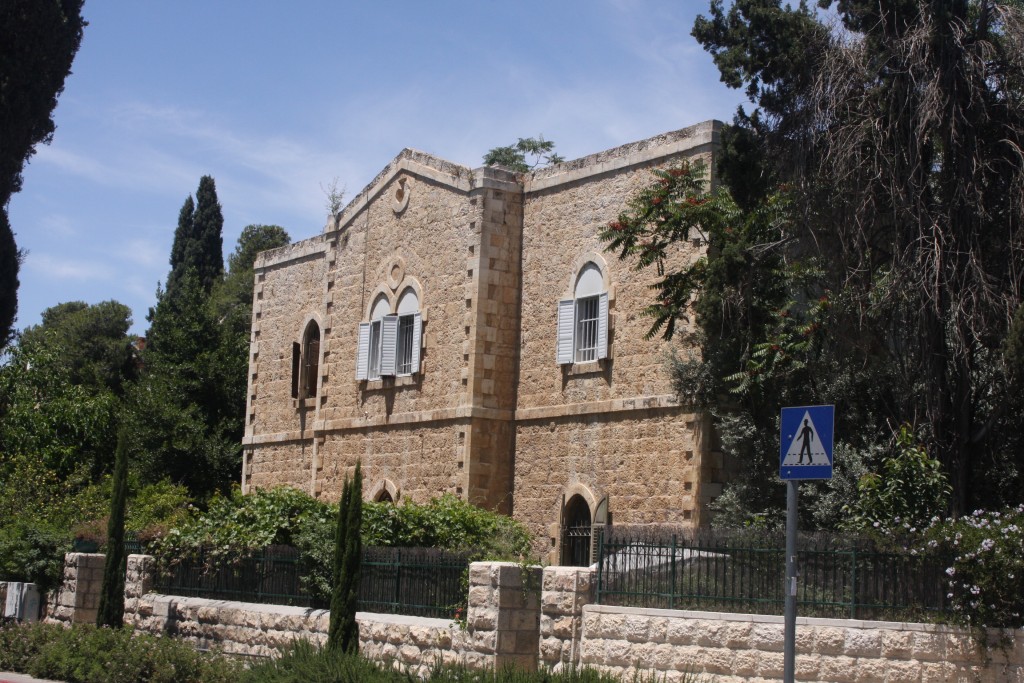 Jerusalem felt like a little village – you could walk everywhere.  We would go to see films at the Smadar cinema which was opened in 1928, see soccer/football games at the field of the left-wing club Hapoel Jerusalem, walk past the windmill and up Jaffa Road to get ice cream at the corner of King George and Jaffa Streets, and could visit the beautiful YMCA building built in 1933 and dedicated by Lord Allenby opposite the impressive King David Hotel that was bombed by Menachem Begin’s right-wing Irgun underground in 1946.  There was the Biblical Zoo, opened in 1940, with both animals and plants that are mentioned in the Bible, and all the other green parks around the city, as well as the very user-friendly Givat Ram campus of the Hebrew University.  There was also the Billy Rose Sculpture Garden.  I even remember going to the old progressive Tzavta Club on King George Street to hear a debate between Prof. Yigal Yadin, the general/archeologist who would one day become Deputy Prime Minister and left-wing firebrand Member of Knesset Ya’acov Riftin from Kibbutz Ein Shemer about the Israeli electoral system.

Although the old Knesset building (soon to become the Museum of the Knesset) was there on King George Street, there were no nationalist, chauvinistic or ultra-religious vibes.

Yes, there was a “No Man’s Land” filled with mines between the Israeli and Jordanian-held sectors of Jerusalem, and I also remember Jordanian soldiers with rifles standing guard over the sandbags strategically placed on the walls and roof of the Notre Dame Center, the Pope’s home away from home in the Holy Land on the other side of the border.

Entrance to the Notre Dame Center

But everything appeared to be calm and quiet. This was the little village of West Jerusalem, and East Jerusalem was on the other side of the moon.

Between Tel Aviv and East Jerusalem

For the past 15 years, I have been dividing my week between my home in Tel Aviv and the offices of the Palestine-Israel Journal (www.pij.org) in East Jerusalem, one of the few spaces where Israelis and Palestinians meet in Jerusalem on a regular basis, while sleeping in The Little House in the (German) Colony in West Jerusalem, not far from where I lived when I was 17. This supposedly “united Jerusalem” gives off totally different vibes.  No longer a little village, today’s Jerusalem feels like a sprawling urban mass, and is ranked as one of the poorest cities in Israel.  In West Jerusalem, the Knesset, Supreme Court and Israel Museum are impressive buildings, while the Hebrew University’s Mount Scopus campus is like a concrete maze.   Immediately after 1967, the new-found access to the Old City was intriguing.  I used to wander around at night visiting the Danish Tea Room, listening to James Brown on the radio.  Today, while still very colorful, it is an uninviting battle ground between local Palestinians hanging on to their homes and extreme right-wing ultra-nationalistic religious Jews.  As for the Western Wall, while I was curious to see and actually touch it after 1967, today the plaza in front of the Wall is a gathering place for right-wing religious Israelis, a counterpoint to Rabin Square in Tel Aviv which I consider to be the center of Israeli grassroots democracy.

East Jerusalem after 1967 appeared to be a vibrant Middle Eastern society, but since being cut off from the West Bank hinterland by the Separation Barrier and the Occupation it has gone into a noticeable decline (with some recent slight signs of revival), while the population has increased.

Will Nir Barkat be the last Jewish Mayor of Jerusalem?

Today the population ratio of Jerusalem is about 60% Israeli and almost 40% Palestinian out of an 800,000 population. At a meeting of peace activists with Jerusalem Mayor Nir Barkat I said, “Given the current population growth rate and the amount of younger generation secular Jews leaving Jerusalem, aren’t you afraid that you will be the last Jewish mayor of “United Jerusalem”?  He avoided answering my question.

On May 12th, 1968, the Israeli government declared “Jerusalem Day” a national holiday.  The date roams around  since it is determined according to the Hebrew calendar, and it falls this year today, May 24th. The right-wing Israeli government is celebrating “50 Years of the Unification of Jerusalem”. However counter signs pasted up throughout the city in honor of President Trump’s visit said the following: 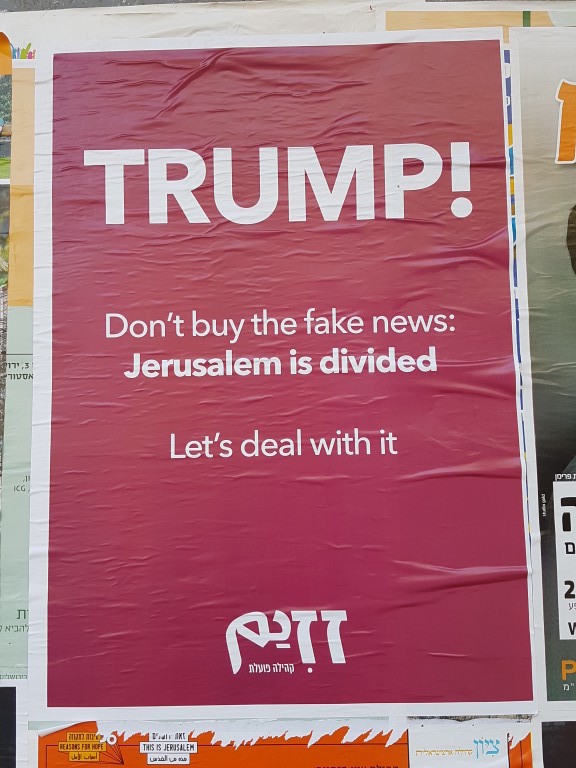 I frequently I take a taxi from the Central Bus Station in West Jerusalem to our East Jerusalem office.  Recently, one Jewish driver became more and more distressed as we neared the Wadi Joz neighborhood in East Jerusalem.  “Where are you taking me to?!  If I had known it was inside the Palestinian area, I wouldn’t have come!”  I asked him “don’t you believe in a “United Jerusalem”?   His response, “No thank you, let the Palestinians have all of East Jerusalem.  I don’t need it.”

I know that there are young Israeli and Palestinian Jerusalemites who believe in working for a better future in a shared city that would be the capital of both Israel and the future State of Palestine.  I admire and encourage them, and wish them well. But one of the blessings of living in Tel Aviv is that there are no holy places to fight over and get worked up about.   Live and let live.