Women of all ages and religious affiliations around the world are gathering in shuls, schools and venues large and small for annual Challah Bakes during the last days of October and beginning month of November.

The Shabbos Project started in South Africa in 2013 by Rabbi Warren Goldstein as a grassroots movement to connect Jews around the world as they celebrate a Shabbos from start to finish.

One important and successful element of the Shabbos Project is the Challah Bake. During a bake, each participant learns how to gather the seven needed ingredients for a challah, kneed the dough, make the blessing, and bake the challah for more blessings before the meal.

Each year, creative volunteers and organizers find ways to incorporate the mitzvahs of Shabbos into memorable events. This year’s Challah Bakes were tied to multiple causes, themes and expanded into programs for men, singles and those suffering from health issues.

Mayan Yisroel is a growing group of single mothers located in Brooklyn. Women who attend their meetings with young children enjoy the comfort of meetings others in their situation without the stigmas attached to divorce or single parenthood in the religious community. According to Esty Wolbe, kosher blogger of the website “Cooking With Tantrums, “We had around 35 challah bakers, mainly moms and their daughters. Rebetzin Tzippy Vigler led the night with inspiring words as always and then everyone got right to it, mixing and kneading together. While the challah rose, we danced. Everyone went home with braided beauties ready for the oven.”

Hunger and Donating to a Kosher Soup Kitchen

According to Alexander Rapaport, the director of the Masbia Soup Kitchen with multiple New York locations, “The theme of this Shabbat is “doing it together” and some celebrate the lead up by holding massive communal challah baking events. Masbia is inviting you to include an element of sharing by caring for the needy in the lead up to the Shabbos by ensuring that everyone has challah, the bare minimum to have a Shabbos meal.

A donation of $8 will allow Masbia to keep the shelves stocked with ingredients to make challah. For every $8 you donate, Masbia can purchase another set of the 5 basic shelf-stable challah ingredients: Flour 5lb., sugar 1lb., salt 26oz., dry yeast (3) 1/4oz. packets, oil 8.5oz.

Every donation gets tripled. Here is how: Every set of ingredients typically yields 5 challahs. For every donation, Strauss Bakery and the Yoni’s Pretzel Challah will each donate 5 challahs from their own bakeries. This triples your donation from a yield of 5 challahs to 15 challahs.

In a typical week, over a thousand families receive free grocery food based on their family size. Masbia relies on the generosity of food manufacturers and people like you to give three days worth of food to every member of the family. The types of food we receive are random but we try to balance it based on the guidelines of the MyPlate recommendations. This week we are asking the community to surprise our patrons with an option for challah in their grocery package.
They can be reached at: http://www.masbia.org/challah.”

October is Breast Cancer Awareness Month. One of the largest Challah Bakes in the Washington DC/Baltimore area featured cancer prevention information as well as using the pink theme from T-Shirts to colored sprinkles on top of Challahs. Multiple Challah Bakes featured gluten free, organic and vegan options for those who follow diets connected to celiac and other medical issues.

GItty Salomon of @challahart fame, demonstrated Menorah and Turkey shaped Challahs during an event in Brooklyn. According to Salomon, “I love to infuse fun and creativity into Challah baking. Dough is like a canvas to me!!!” 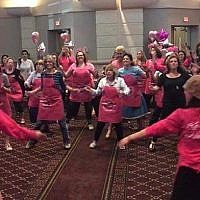 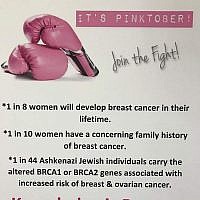 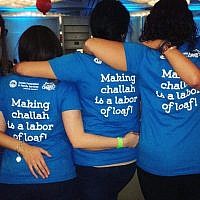 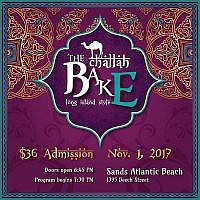 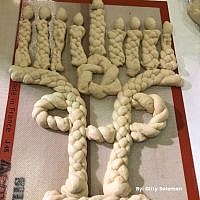