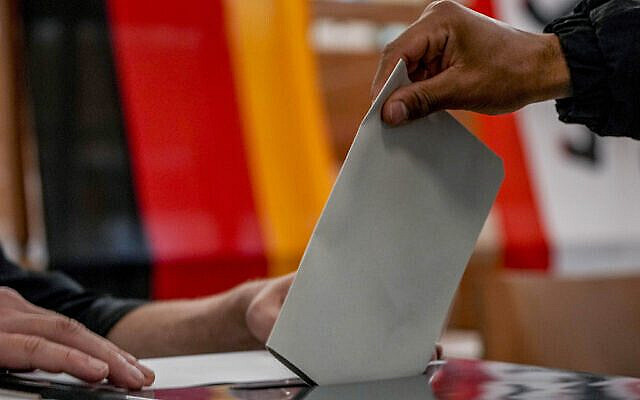 A man casts his ballot for the German elections in a polling station in Berlin, Germany, September 26, 2021. (AP Photo/ Michael Probst)

The German election was not the cliffhanger that news reports suggested in their quest for a simple-yet-engaging narrative. The result is messy, like in most elections these days, but viewed a certain way it is one that moderates and liberals in the  United States and elsewhere can but envy.

It’s true that the center-left SPD (the Social Democrats) has an advantage over the retiring Angela Merkel’s center-right alliance that many call “wafer-thin”: dependable preliminary results give it 206 seats out of 735 (or 28% of the seats in the Bundestag) versus 196 (27%) for the “Union” (or CDU/CSU if you prefer alliterative acronyms).

Just as in Israel, however, that plurality means next to nothing. The challenge is getting a 50% plus one majority in the Bundestag, which no single party has enjoyed in post-war history. So here’s the fuller picture in the wake of this week’s German federal election:

So there you have 455 seats, or 62%, who are by no means in the zone occupied by the US Republican Party, Israel’s Likud, the cabal running Poland and Hungary, the Le Pen project in France, or any of their fellow travelers. There is a strong majority for climate non-denial and against toxic nationalism – a a landscape that moderates and liberals in the United States and many other countries accept in a heartbeat.

And what of the rest?

The Union is seen as center-right, but it is essentially the mildest version of this that one sees in the global political arena. Yes, Merkel was hard as nails with Greece when it came to an economic bailout about a decade ago (Remember Grexit? Who knew!). But more recently she was the bleeding heart who let in  masses of migrants fleeing Middle East mayhem. For the continents’ nationalists (and racists), that makes her the personification of cosmopolitan/globalist lack of resolve in the face of cultural invasion.

These ultranationalists are represented by the Afd (Alliance for Germany) party, which appears to have won 83 seats or just over 11% of the total. The AfD, which like the Left is not seen by anyone as a coalition partner, is the only one parliament faction which can unequivocally be called right-wing in today’s sense of the term. Anti-Semitic though many of its members surely be, it is also the only German party where the more nationalist of Israel’s Knesset members could comfortably feel at home.

To recap, then: only 39% of the new Bundestag’s seats are truly right-wing, and that includes mostly the party of Merkel, who famously detested both Donald Trump and Benjamin Netanyahu (for policy as well as personal reasons).

In fairness, there is another way to look at this. If you count the FDP’s liberals with the right – and some in Germany will go to their graves insisting on this – then we have something approaching a 50-50 split in the Bundestag, with an advantage of a handful of seats to this “right.” It is not actionable because for the moment there are zero voices calling for an alliance with the AfD (as said, Israeli politics have not yet come to Germany). But still.

No one knows exactly what coalition government will result. The most likely option may be an alliance of the SDP with the Greens and the FDP with the SDP’s Olaf Sholz as chancellor. This will quality as something of an opposition victory; as close as you can get to a center-left government in most parliamentary democracies these days. Look for pro-EU, pro-green policies, horror at any Republican resurgence in 2022, and support for two states in Israel-Palestine. The German stock market will like it.

But other possibilities are possible as well, mainly a “unity government” with the Union. Indeed, that was the model for the last several governments under Merkel. Its policies should be quite similar, perhaps just a bit less green.

That there is such murkiness might  suggest Germany’s system could use a few tweaks. The  described party breakdown was yielded by a mind-boggling multi-vote system best left to doctoral dissertations at the University of Vienna. But in its defense, the country has held elections almost like clockwork every four years, with only a few exceptions since the war.