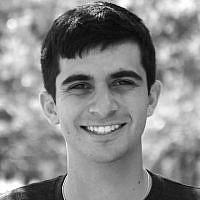 The Blogs
Ryan Ladd
Apply for a Blog
Please note that the posts on The Blogs are contributed by third parties. The opinions, facts and any media content in them are presented solely by the authors, and neither The Times of Israel nor its partners assume any responsibility for them. Please contact us in case of abuse. In case of abuse,
Report this post.

Last week, I witnessed the Student Government Legislative Assembly at The University of Texas at Austin reject a bill calling for the university to boycott, divest and sanction Israel, as a part of the global BDS movement. This hot-button issue is trending on college campuses and specifically targets Israel, the only democracy in the region and closest ally of the United States.  Members of the assembly who also are part of the Palestinian Solidarity Committee (PSC) — a campus group promoting the global BDS Movement through campaigns, events, protests and online mobilization — introduced the bill.

BDS has no place on UT’s campus, because it unjustly defames Israel by questioning the legitimacy of the Jewish state. In fact, many on campus were not informed about the ramifications of BDS until it was brought to Student Government, never mind how it would impact key programs at UT and the student body. We have seen our brothers and sisters at schools like UC Davis, Emory, Northwestern, NYU, and more struggle with anti-Semitism. And when anti-Israel activity comes to a campus, anti-Semitic behavior tends to follow. Whether from fake eviction notices or swastikas painted on Jewish buildings, these issues are intertwined.

The UT–Austin Jewish community has deep ties to Israel.  I worry that if this legislation had passed, many Jewish students would not feel safe on campus. As students and as humans, we have a responsibility to stand up against the injustice in our world, but not by causing more pain.  At a time when we should be coming together for the betterment of our world, the divestment legislation divides campuses by making people choose sides of an issue they do not know much about.

I am a BBYO alum and Community Engagement Fellow, a brother of Alpha Epsilon Pi, an intern at Texas Hillel and a pro-Israel activist. I understand how UT’s Jewish community works and that doing something “Jewish” on campus is not for everyone. However, when BDS legislation was brought to Student Government, I watched the Jewish community wake up and was proud to see us joined by classmates of all faiths and backgrounds. In light of the bill, our community launched an initiative called Unify Texas to show Student Government how serious students are about voting this legislation down.

In the weeks leading up to the vote, we tabled to get students to sign a petition against the resolution, constantly emailed Student Government representatives expressing concerns, publicly showed support on social media and came to the Student Government meeting wearing white to demonstrate our unity. We were joined by old classmates, friends and family across social networks who showed solidarity in our efforts to #UnifyTexas.  To put it simply – moments like this remind me why being Jewish is special.

At UT, the Jewish community is tightly knit; many of us have grown up together.  But off campus, we’re a minority.  We are 13 million people out of seven billion, and the future of our community is uncertain. In these moments of anti-Semitism and fear, we remember that we were once slaves in Egypt, victims of the Holocaust, and have been wandering for centuries looking for a home.

It may not always feel that way in the “life on campus” bubble surrounded by Jews and familiar friendly faces, but sitting outside the Student Government meeting for hours was a reminder that we have not always had it easy, and are still a target to many people around the world.

The UT–Austin community – students of all backgrounds – mobilized because Israel is dear to us, but also because we care deeply about the sanctity of the greater UT community we’re so grateful to be a part of.

The conferences and Jewish experiences that our community continues to invest in paid off. The Jewish students at UT – whether because of participation in on campus cultural celebrations and learning engagements, an Israel advocacy summit in DC, a leadership mission to Israel, two-week program witnessing the atrocities of the Holocaust or the lessons learned in youth groups and summer camps before arriving to campus – were prepared to defend Israel.

We had the tools we needed to engage our peers, and our Jewish leaders effectively mobilized. We fought this resolution together. I am proud that our community was able to unite when it counted, and I am happy that UT remains a safe place for all students.

Ryan Ladd is a sophomore at The University of Texas at Austin and is originally from Austin, Texas. Ladd is pursuing a degree in Advertising in the Moody College of Communication.

About the Author
Ryan Ladd is a sophomore at The University of Texas at Austin and is originally from Austin, Texas. Ladd is pursuing a degree in Advertising in the Moody College of Communication. Additionally, Ladd is a BBYO alum and Community Engagement Fellow, a brother of Alpha Epsilon Pi, an intern at Texas Hillel and a pro-Israel activist.
Related Topics
Related Posts
Comments