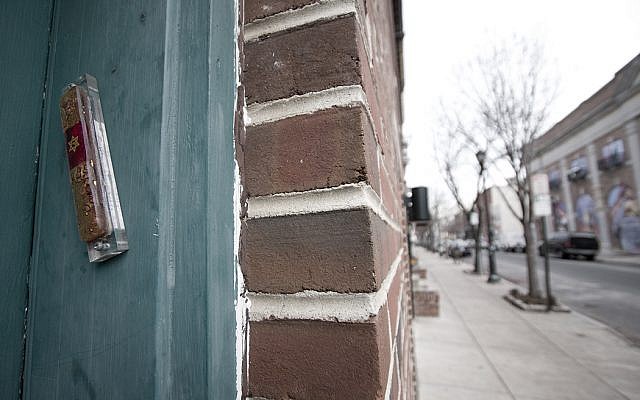 Courage and perseverance have a magical talisman, before which difficulties disappear and obstacles vanish into air. — John Quincy Adams

One of the more recognizable and widely used Jewish artifacts, even in Jewish homes that are not otherwise observant, is the Mezuza. The Mezuza is a small piece of parchment, with two paragraphs from the book of Deuteronomy written on it, in the ancient fashion. Not coincidentally, these are the first two paragraphs of the biblically-mandated Shma prayer, where the commandment of Mezuza is articulated. The Mezuza is typically housed in a simple container (which over the years has evolved into more intricate and beautiful designs) and placed on the upper third of a doorpost, on the right side of the entry to whatever house or room lies beyond the door.

The Mezuza has taken on the status of a talisman, a metaphysical object that conveys some otherworldly protection to those that have it. It is not an uncommon belief that when some tragedy befalls a home that one should check their Mezuzas. Finding an error in the text of the Mezuza is attributed as the cause of the misfortune. However, this misses the point and purpose of the Mezuza.

Rabbeinu Bechaye on Deuteronomy 6:9 (Vaetchanan) explains that in ancient days, the nations of the world believed that the fate and well-being of their homes were determined by the constellations. Astrology and horoscopes were the arbiters of success or failure. For that reason, on the outside of the Mezuza scroll, we write one of the names of God, the one in particular that apparently vanquishes any astrological effects and highlights that good and bounty come from God and not from any particular astronomical phenomena.

Rabbeinu Bechaye details what it is about the Mezuza and its two paragraphs that truly make it so important, so powerful. It is not the physical object (though it must be scrupulously written), but rather, the ideas contained within. The Mezuza text talks about God’s Unity, the study of His Torah, reward and punishment and hints at the Exodus from Egypt with all the accompanying miracles. This text establishes three fundamentals of Jewish belief: faith in God; God’s constant renewal and presence in our world; and the truth of prophecy, God’s ability to communicate with man, and for man to be able to hear His call.

It is remembering these principles that gives us power and protection. It is by constantly remembering and affirming these fundamental ideas and beliefs of Judaism which brings us under God’s wing. That is why we have it at the entrance to our homes and rooms. That is the reason many Jews touch the Mezuza on entering and exiting their domicile. There is no commandment to touch the Mezuza. The commandment is to remember and be always cognizant of some of the founding principles of Judaism, part of what makes us merit God’s greater intervention and concern for our lives and wellbeing.

May the ideas and principles we establish in our homes make us worthy of divine protection.

To Rabbi Mendy Shemtov of Montevideo,
for his efforts to provide every Jewish home with a Mezuza.