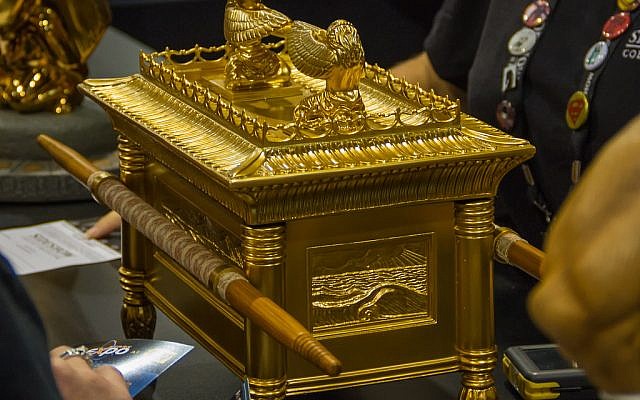 A photo of a model of the Ark of the Covenant (Chris Favero/flickr. Attribution-ShareAlike 2.0 Generic CC BY-SA 2.0)

We are all familiar with two very different arks that are mentioned in the Bible: The Ark of Noah and the Ark of the Covenant. The Ark of Noah was a large wooden boat which Noah constructed for housing his family during the floods of the Great Deluge (Gen. 6-9), while the Ark of the Covenant was a wooden box coated in gold in which the tablets of the Ten Commandments and a Torah Scroll were stored. While in English both of these somewhat dissimilar items are conveniently labelled “arks”, the discerning reader might notice that in Hebrew two different words are used. The Ark of Noah is called a teivah, and the Ark of the Covenant is called an aron. The two words clearly refer to types of storage implements, but since they are two different words they cannot mean the exact same thing. What then is the difference between the words teivah and aron,which can justify translating both words as “ark”, yet show that the two words actually bear different connotations?

In the Bible, the word teivah appears in two contexts: the Ark of Noah and the basket wherein the infant Moshe was placed before his mother left him on the Nile River (Ex. 2:3). The word aron is also used in two contexts in the Bible: the Ark of the Covenant and the coffin within which the body of the deceased Joseph was placed (Gen. 50:26). The usage of these terms in the Bible may help us determine the differences between them.

Based on the contexts in which these two words are invoked, we may argue that the difference between them is in where the arks are used. The word teivah is only used for a storage device kept afloat on the water, while the word aron refers to storage place that need not necessarily involve floating on water. So, it seems that the difference between the types of containers meant by teivah and the types meant by aron is that the former is only used for storing something atop a body of water, while the latter is not.

Alternatively, we may suppose that the distinction between these two forms of storing lies in what is being stored. In the Biblical examples the word teivah refers specifically to “storing” a live person, i.e. Noah and his family or the baby Moshe. Rabbi Aharon Marcus (1843-1916) points out that the word teivah is related to the word bayit (house) because they both contain the same letters. This implies that a teivah, in some ways, is like a person’s home. The word aron, on the other hand, refers to other types of storage — even storing inanimate articles like the Tablets or Joseph’s corpse.

All of this explains the difference between the words teivah and aron in the Biblical sense. However, when we include rabbinical usage of the words the matter becomes far more complicated. In Rabbinic Hebrew, we find the words teivah and aron used almost interchangeably. For example, one Mishna (Ta’anit 2:1) tells about how on communal days of fast the teivah would be taken outside to the city plaza in a show of public outcry, and another Mishnah (Megillah 3:1) rules that money received from selling a synagogue building can only be used for purchasing a teivah or something holier than a teivah. What does the Mishna mean when it refers to a teivah in these cases? The commentators discuss whether the Mishna refers to the Holy Ark of a synagogue which houses the Torah Scrolls, or to the table (known as bimah) upon which the Torah Scrolls are placed while being read. Either way, the word teivah in the language of the Mishna does not refer exclusively to something floating on the sea or housing a live person, which defeats the definition given above.

Likewise, the Talmud Yerushalmi (Shekalim 6:1) explains the structure of the Ark of the Covenant — which the Bible calls an aron. It explains that the Ark was actually made up of three teivahs (in this context, boxes), two golden and one wooden. The wooden box was placed inside one of the golden boxes and the other golden box was placed inside the wooden box so that all exposed surfaces were golden with the wood hidden underneath. Thus, this three-teivah structure made up what is known as the aron. This passage, as well, disproves our prior assumptions about the nature of the differences between the words teivah and aron.

Finally, Modern Hebrew offers a clear delineation between the two terms (although historically its distinction may not be well-grounded), because in modern Hebrew the word teivah refers to a storage chest, and the word aron refers to a closet.