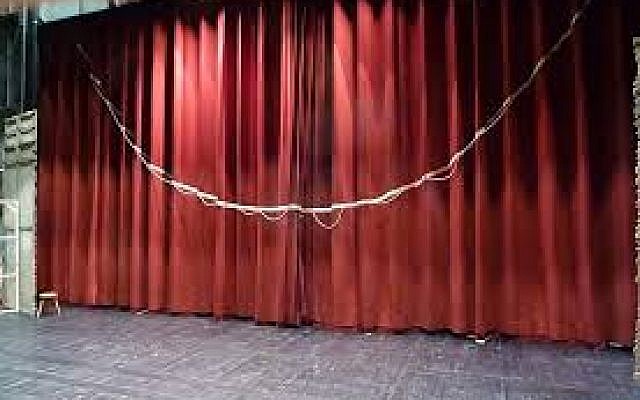 We call the special ornamental curtain which hangs in front of the Ark in a synagogue a parochet. That word comes from the Biblical passages concerning the Tabernacle, in which the word parochet refers to a “curtain” that separates one area from another. However, another word is also used in that very same context: masach. In this essay, we will sharpen the differences between the meanings of these two words, and we will also explain the etymology of the words vilon and pargod that appear in the Talmud and other rabbinic sources as “curtain”.

Rashi (to Ex. 26:31) explains that parochet refers to a “curtain” that separates between a king and his people. In the context of the Tabernacle the parochet is used to separate between the Sanctuary and the Holy of Holies (see Ex. 26:31-33).

Rabbi Shlomo Pappenheim of Breslau (1740-1814) explains that the word parochet is related to the root PEH-REISH-KAF. That root refers to a form of “breaking” whose purpose is to begin something new. For example, the Jews’ work in Egypt is described as avodat perech (Ex. 1:13), because the Egyptians would constantly interrupt the Jews in middle of their work and make them work on something else. Constantly stopping the Jews from finishing their project was a form of torture which the Egyptians inflicted upon them. In Talmudic parlance a pircha is the type of question which interrupts the intended flow of a discussion and forces the topic into a different direction.

Similarly, explains Rabbi Pappenheim, the word parochet serves as a partition to “break off” one area and mark off the beginning of a new area. This is why in the Tabernacle a parochet is used to demarcate the Holy of Holies and separate it from the Sanctuary. The parochet essentially screams: “Up until here is the Sanctuary; from here and onwards is something new and holier — the Holy of Holies.” Based on this, Rabbi Pappenheim argues that the word parochet does not inherently refer to a “curtain,” but rather it refers to any sort of barrier or divider used to establish the borders between different domains.

In contrast to all of this, the term masach has a completely different connotation. Rashi (to Ex. 26:36) explains that a masach is a curtain which covers the entrance to a building or room (see also Rashi to Ex. 35:12).

Rabbi Pappenheim explains that the word masach is derived from the root SAMECH-KAF, which refers to “covering”. Other cognates of that root include sukkah (a “hut” covered with s’chach) or the Modern Hebrew word maseicha (“mask” which covers one’s face). In a similar fashion the word masach refers to a screen or curtain that protects something from the eyes of onlookers. In fact, masach in Modern Hebrew refers to any sort of “screen” (e.g. a computer monitor). Rabbi Pappenheim further explains that masach refers to any thick cloth used for protective purposes, whether it is placed on top of something as a cover (like in II Sam. 17:19 and Ps. 105:39), or drapes down from its side like a curtain.

Vilon — another word for “curtain” — appears four times in the Mishna (Keilim 20:6, 24:13, 27:9, and Negaim 11:11). It is also the name of the first of the Seven Heavens (Chagiga 12b) because it serves as a “curtain” that covers the entrance to the Heavens. However, the origins of this word are neither Hebrew nor Aramaic — it’s Greek. The Mishnaic word vilon is a loanword from the Greek velum, which is related to the English word veil. The word velum survives in English scientific terminology, where it refers to a thin veil-like membrane. The English words reveal and unveil literally mean to “undo a veiling”.

In Rabbinic Hebrew, the word pargod is used instead of parochet. Rabbi Nosson of Rome (1035-1106) writes in Sefer HaAruch that a pargod is the word for a “curtain” that separates a bridegroom from everyone else. This, of course, mirrors the way that a parochet refers to the “curtain” that separates a king from the masses, or the Holy of Holies from the Sanctuary. Indeed, when the Mishna (Keilim 29:1) uses the word pargod, Rav Hai Gaon’s commentary there explains that pargod means parochet.

The esteemed etymologist Ernest Klein (no relation) writes that the word pargod is derived from the Greek paragaudos/paragaudion and the Latin paragauda, which refer to a “laced garment” or “tunic.” In this way, the lattice design of a curtain somewhat resembles the make of the garment in question. Others explain that pargod comes from the Latin word pergere (“come” or “go forward”), which in turn might ultimately be derived from the Akkadian paraku (“to go across”). This refers to the curtain’s position at the entrance to a building or room, and how one must pass through the curtain to enter. Another derivative of pergere is the Latin word pergola — from which the English word pergola is derived — which refers to a “roof” that “comes out” or “protrudes” from elsewhere.