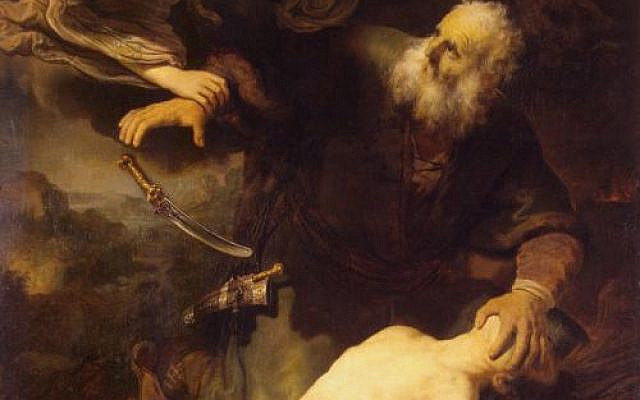 The Sacrifice of Isaac in a 1635 autograph oil on canvas work by Rembrandt. From Wikipedia.

“When Avraham awoke in the morning” (Bereisheet 22:3). This verse is the source for the principle (zerezim makdimim lemitzvot,) of waking up early to perform a mitzvah (see Pesachim 4a). What makes this idea more forceful is the context.  God told Avraham to take his only son on a three day journey and then sacrifice him. This is the hardest of commands to perform.  How can that teach us the principle of doing a mitzvah at the earliest moment?

Examine today’s sociology – does everyone get to shul on time?  Are we ready for Shabbat or yom tov without a last minute rush?  We learn that when the task is one of the hardest to perform, getting it done on a timely basis (i.e. early) is advantageous.  How many times have you put off doing something unpleasant or inconvenient?  Did the delay make the job any easier?  For example, a class has students who eagerly complete their assignments on time and other students who wait until the last minute.  I tried to encourage them by saying if a client or customer was waiting, the job needs to be done now, not after you take a nap and think about it. Which student do you think felt calmer and prouder of his work – the one who did the job early or the one who waited until the last minute?

Was Avraham a religious fanatic or someone who tried to do God’s with the best intensity that he could?  Avraham does not question the command to leave his birthplace.  He did question the need to destroy Sidom.  One of the differences between a fanatic and one who wants to perform mitzvot with reverence to halakha (observant one) is the former is obsessive, destructive, and debilitating while the latter is encouraged.  The fanatic acts on emotion, not reason.  The fanatic does not see the whole picture and only cares about the self or his small community. The fanatic does not recognize divergent opinions or ideas.  The religious person is constantly learning the laws and rituals and figuring out how s/he fits into the family and community. Curiosity, new ideas and questions are allowed.

While Avraham followed the Divine commands, he was no fanatic.  Without a clear and direct command from God, Avraham’s actions toward the sacrifice of Yitzhak would be considered attempted murder.  He had three days to decide to disobey the command. We know this was a test, but Avraham did not know.  He did know that other peoples did sacrifice their children to their pagan “gods.” Despite everything that Avraham learned about the ways of God and the great difficulty of the task, Avraham was ready to carry out the Divine command.

Fanatics are willing to force or even kill non-believers in their zeal to get closer to their god.  No learning will convince them of the error of their ways.  Avraham had to learn the hard way that ways of Judaism and service in the ways of Ha-Shem do not require blood or hurt.  Avraham is our role model in the area of Divine dedication and submission.  The combination of dedication, submission, and learning is the reason we respect him as the founding father.

The business lesson is we should be reverent to authority but fight for our legacy (i.e. our children).   Get up early and do what needs to be done.

After I posted this before Shabbat my brother and sister disagreed with my opinions. I discussed the ideas with several of my friends over Shabbat. One friend teaches Bible in a Jewish high school.  Much of my davar Torah was based on the comments of Rabbi Jay Kelman of Toronto.  Perhaps the real problem is the word “fanatic?”  Anyone who is more “religious” than you or me may be a “fanatic.” One rarely thinks of himself as a “fanatic.”

Noah was righteous when compared to his generation. Avraham is not compared with his neighbors. In our world, anyone who claims to have heard God tell him to sacrifice his son would be accused as crazy.  If he acted on the voice, he could be accused of criminal child abuse.  In the ancient Near East there is some archeological evidence of child sacrifice. However, Yitzhak was not a child.  Anyone who does not protect his child, is not a good parent or good member of the tribe. The Rembrandt picture shows the trauma of the event.  Even though God’s plan was not to make Avraham sacrifice his son, the series of events left a mark on the psyche of father, son and us.   It is our job as parents to protect our children.  If we take the story as teaching us child sacrifice is not what God wants, the narrative is weak. A stronger story would have taken place when Yitzhak was a toddler or younger. This not a story that highlights any of Avraham’s positive character qualities.