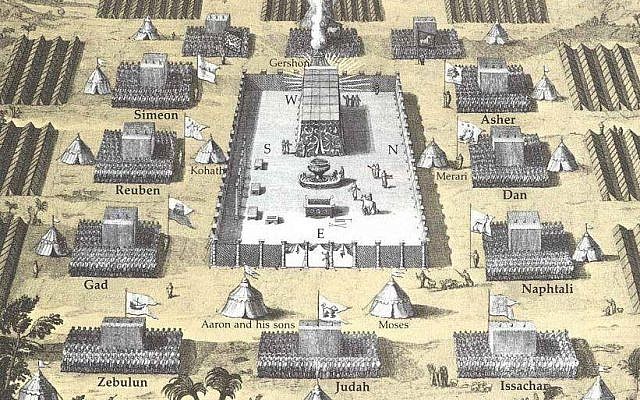 Speak to the children of Israel, and have them take for Me an offering; from every person whose heart inspires him to generosity, you shall take My offering. (Ex. 25:2)

Every physics professor teaching physics 101 to freshmen spends the first lecture teaching vector algebra. Why vectors are so important? Because most quantities in mechanics (a branch of physics dealing with motion and forces) are vectors. A vector is a mathematical object that has a magnitude and a direction. For example, velocity is a vector – it shows not only how fast the object is moving, but also in what direction it is moving (it is different from “speed” which is an average velocity and is just a number). Similarly, acceleration is a vector, force is a vector, angular momentum is a vector, and so on.

In quantum mechanics, subatomic particles have internal angular momentum, called spin. Spin is somewhat analogous to a spinning top, although, in reality, nothing is spinning. It is an internal degree of freedom. Spin has a vector associated with it (analogous to an axis of rotation). If an electron, for example, is “rotating” clockwise, its spin vector is pointing down; if counterclockwise, the spin vector is pointing up. In Judaism, everything has a “vector” associated with it. Everything can be viewed as either an elevation or as a descent. This spiritual “vector” either points up when we elevate material into spiritual, mundane into holy; or it points down when we bring God’s beneficence down from on high.

In the Torah portion Terumah that we read last Shabbat, there are two key concepts that vividly exhibit such “vector” qualities. The first concept is terumah – the gift offering that Israelites donated towards the building of the Tabernacle (Mishkan). Terumah, usually translated as “offering” or “donation,” literally, means “elevation.” By bringing building materials for the Tabernacle, Israelites elevated these mundane material objects to holiness. Terumah, therefore, has a “vector” pointing up.

The Tabernacle (Mishcan), on the other hand, had the opposite purpose – to bring God’s blessings and beneficence down to His people.  God came down to the Holy of Holies in the Tabernacle to manifest His presence – Shechinah. The Tabernacle, therefore, has a vector pointing down.

Another way to classify things in Judaism is by gender. In the Hebrew language, every word has a gender – either masculine gender or feminine gender. Similarly, in Kabbalah, everything is viewed as either rooted in the masculine principle or in the feminine principle. Thus, at the beginning of his commentary on this Torah portion, the Arizal writes, “know that Terumah is a feminine principle.” (Sefer Likutim)

In Kabbalah, gender takes a rather abstract meaning. On the level of action, giving is associated with the masculine principle, and receiving is associated with the feminine principle. On the level of emotions, inspiring others is viewed as masculine, whereas being inspired as feminine. On the intellectual level, an abstract ideal is viewed as masculine, whereas the concretization of the abstract idea and the realization of the ideal in the physical world are viewed as feminine.

Today, it is fashionable to speak of gender fluidity. Kabbalah presents us with the ultimate gender fluidity, as everything has masculine and feminine aspects. Every one of us plays in our masculine or feminine roles regardless of our sex, and the roles change depending on the circumstances. For example, when a person speaks, he or she acts in a masculine role regardless of sex. When a person listens, he or she acts in his or her feminine role. When I teach, I act in my male capacity. When I learn from others, I act in my feminine capacity. Inspiring others is masculine, whereas being inspired is feminine. When Moses ascended to Mt. Sinai to receive the Torah, he acted in his feminine capacity; whereas when he brought down the Torah and taught it to the children of Israel, he acted in his masculine capacity. This dichotomy is rooted in the dichotomy of the creation – the dynamics of God-creation relationship, wherein God, as the Creator, plays the “masculine” role and the creations, which are on the receiving end of this relationship, play the feminine role.

The masculine-feminine classification is parallel to the vector up-down relationship. The descent of God’s beneficence (vector is pointing down) is clearly of masculine nature. The elevation of the mundane into sacred is deemed feminine, because it is returning to the source some of what has been given to us by God, and it is always done as a result of being inspired to do so.

Thus, in this Torah portion, the children of Israel are asked to donate (lit. “elevate” – vector pointing up) as much as they are inspired to give. This is why the Arizal calls Terumah – donation (lit. “elevation”) – a feminine principle. By doing so, the Israelites created vessels (which are always deemed feminine in Kabbalah) for the Tabernacle to receive God’s presence (Shechinah) and beneficence (male principle – vector pointing down, i.e., drawing down God’s blessings).

I am always inspired (being in my feminine role) to see how concepts in physics help illustrate mystical concepts of the Torah. I hope I can inspire (being in my masculine role) my readers as well.