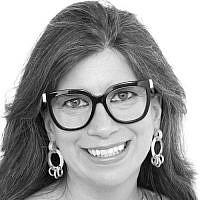 The Blogs
Tania Elfersy
Apply for a Blog
Please note that the posts on The Blogs are contributed by third parties. The opinions, facts and any media content in them are presented solely by the authors, and neither The Times of Israel nor its partners assume any responsibility for them. Please contact us in case of abuse. In case of abuse,
Report this post.

Israeli comedian Assaf Harel just got lucky. Thousands of people who’ve never laughed at even one of his comedy sketches are sharing a video of him going off on a political rant. In the video, taken from the last episode of his late night TV show (which was just discontinued due to poor ratings), Harel encourages Israelis to “wake up’ and smell the “apartheid.”

His show may not have been popular, but Harel decided to go out with a bang and the video of his rant has gone viral.

But as Harel adopts a controversial stance to make his point and then speaks down at the people, there are two groups who are going to benefit from this video: BDS (more about that later) and the right wing in Israel.

Under the current leadership of the Labor Party, Yitzhak Herzog has slashed support for the party to under ten mandates. What Herzog in his brilliance hasn’t yet destroyed, Harel and others who adopt a similar message and tone to that which he used in his rant, will surely finish the job. In the lead up to 2015 elections, Harel’s uncle, Israeli artist and humorist Yair Garbuz, complained about a “handful of amulet kissers that have taken over the country.” It is estimated that those words and the scandal that ensued cost the left at least several mandates.

It would be nice if the Israeli left could learn from its mistakes, recognize the prejudices that still exist within the political camp, and stop shooting itself in the foot.

Here are four reasons why if you’re on the left and you’d like to see the left return to power any time soon, I urge you NOT to share Harel’s video.

In the video, Harel declares the people are sleeping; it implies that he is already awake. Harel, Ashkenazi man, Tel Avivian, “son of”, comedian, served in the army in the theatre troupe (sorry, that matters), is telling us that he is awake in his level of understanding of Israeli politics and society and therefore enlightened, whereas the people of this country are not.

Years before the American left ignored the fears of the Rust Belt (which led to President Trump) and the left in the UK ignored the fears of immigration (which led to Brexit), the Israeli left chose to ignore the people’s fear of terror, and their fear that the Palestinian leaders might not deliver on their promises. Ignore people’s fears and you lose elections. Imply that their fears exist because they are not enlightened and you lose elections. So who exactly has been sleeping and at what cost?

Harel introduces an idea that we change after war – peace with Egypt after The Yom Kippor War, The Oslo Agreements after The First Intifada, but then his theory of history abruptly stops. In the recent tradition of those who claim to be enlightened on the left, he fails to mention The Second Intifada, which came after Oslo. Maybe if he doesn’t mention THE SECOND INTIFADA, which started when the Israelis were trying to make peace with the Palestinians, the people will forget it. Perhaps because they’re sleeping. Except the people haven’t forgotten and until the left once and for all explains in real terms what happened 17 years ago, the left will never return to power.

Harel expresses compassion for the people of Gaza without expressing even a drop of compassion for anyone in Israel who has suffered from the over ten thousand rockets that have been sent from Gaza since 2005. He was speaking in Hebrew, trying to convince Israelis that he is right . . . and it’s bewildering. Not only does he suggest that it is because of the sleeping Israeli people that the right wing keep getting elected, but it’s also because of the sleeping Israeli people that the Gazans are suffering. He blames Hamas for . . . nothing! According to him, Hamas is not part of the equation. The Israeli people are not stupid, Harel, but when you relate to them as if they are, guess what happens. You lose even more mandates come the next election.

I know, use some controversial language and you gain more attention. But surely an “enlightened” man of culture can see beyond a need to gain attention, especially when it comes at a cost, and even when your TV show’s just been dropped.

Over the border in Syria there is a truly horrible war and hundreds and thousands of people have been killed; I assume Harel wouldn’t call it a holocaust. I assume he understands that language matters.

Here in this country we have a long standing right wing government that is pushing a racist agenda in the territories and has recently passed the widely criticized Regulation Bill (which appears will not be upheld by the courts). We also have in place security measures that don’t sit comfortably in a democracy and yet we are also the only democracy in the world to be surrounded by neighbors who not only threaten us regularly, but send missiles and terrorists to attack us, too. We don’t know how other democracies would respond to a similar situation in their countries. But we do know, by studying the history of South Africa, that using the word apartheid to describe the situation here is inaccurate. Worse still, it offers a prize to BDS, who are hell bent on delegitimizing Israel’s very existence.

In his video, Harel describes life in Israel as most of the people in Israel don’t even live it – but clearly it’s his perspective from cozy Tel Aviv. Broadening his perspective a little bit may have opened him to the fact that the very same week that his video started doing the rounds on social media, Jewish students on campuses around the world were defending themselves during Israel Apartheid Week (which actually doesn’t last a week but stretches out over March and April). A version of his video with English subtitles currently stands at around a million views on Facebook and you can be sure that the very people who are making life on campus oppressive for Jewish students, are lapping up Harel’s apartheid video and sharing it to advance their cause.  Perhaps Harel didn’t think about that before he opened his mouth on TV but he works in the media in 2017, and for a man who claims to be awake, he should have thought about how far a message from the media can reach and the impact it can have.

And so should we all.

About the Author
Tania Elfersy is an award-winning author, researcher of innate health and transformative coach. Tania can be found over at http://www.thewiserwoman.com/ where she raises awareness about perimenopause and menopause and helps women reach 100% natural symptom relief.
Comments