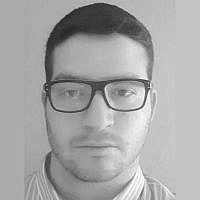 The Blogs
Isaac Azuz
Apply for a Blog
Please note that the posts on The Blogs are contributed by third parties. The opinions, facts and any media content in them are presented solely by the authors, and neither The Times of Israel nor its partners assume any responsibility for them. Please contact us in case of abuse. In case of abuse,
Report this post.

I’m sure everyone is tired of hearing different reports about the infamous Coronavirus, but the news reports will not stop any time soon.

With the Israeli government declaring on February 26, less than 60 days after the initial outbreak in Wuhan, China, a strict travel warning for its citizens. And being the first country to do so, all who are familiarized on how the Israeli Intelligence works, already know, this is serious and it’s worse than we previously thought.

If China, who’s contingency plan and methods bordered on the inhumane, failed at containment, we can only assume that the virus in more liberal and free flowing countries will propagate much quicker.

Around 31% of Latin Americans live bellow the international standard for the poverty line, with lack of access to hospitals, doctors, or even food. For some who still live in tribes, the virus will probably go by unnoticed and it will all blow over. For others not so lucky, living in a densely populated city, they will probably be advised to stay in doors if they start feeling symptoms, but if the government fails to distribute supplies in efforts to quarantine it’s less fortunate citizens, that advice will be ignored, because some people can’t afford to miss a day of work.

Is the WHO a sleep at the wheel?

With the World health organization declaring an international outbreak, are we really doing enough? Are we taking this too lightly? Let me run some numbers on you, with in 60 days the Coronavirus infection count is plus 80,000 (that we know of), that’s an average of 1200 new cases each day on average, since it started that’s a %1200 increase in 60 days, starting with patient zero only 60 days ago, it means that it’s spreading very fast.

Reports of a cruise ship being denied it’s usual docking spot in the Port of Jamaica, it was forced to deviate to the island of Cozumel, Mexico. With reports of at least 1 person on board with flu like symptoms, the Jamaica authorities made the right decision to turn the cruise away, the small, rural and tropical island of Jamaica would not last long with a virus of that magnitude and the time of being nice instead of safe is over, remember Jamaica is a small island country, it would be decimating for them, with potentially no help from the outside world, there is also the the risk of economic collapse, and food supplies running dry.

Up on arrival to Cozumel, the ship was faced with skepticism and denied port by the local government, the situation is still developing at this moment but it seems that it has been allowed to dock at least to refuel. I would advice the Mexican government to not let anyone down on to the island until there is a %100 certainty of no infection on board the ship.

Some countries like The Islamic Republic of Iran, refuse to acknowledge there have been cases reported inside their country, for fear of tourism backlash, this only makes it worse for all of us, we must understand that this is a global effort, if all of us aren’t on the same page, the toll will be much higher. Not wanting to risk your tourism industry by further spreading the disease, will not only collapse your tourism industry, it will hit every other industry in your country.

There is a terrible trend going around of mocking people with Asian traits and acting as if they are all dirty or infected, taking precautions is one thing, which is acceptable and needs to be understood, if you don’t feel comfortable next to someone, move, but do it in a quiet and courteous manner, this isn’t pre-school and no one has the cooties. How ever i do believe in safety over politeness.

Listen to the government

To some it sounds like a scary thing to hear but it’s the only way to avoid further spread.

I don’t believe the government should be polite about it, priority number one should be to show results. One of the key weaknesses of western countries is the freedoms we posses, everyone wants to do their thing, but it must be understood that now is not the time to stick it to the man.