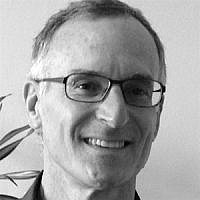 The Blogs
Ron Lezell
Apply for a Blog
Please note that the posts on The Blogs are contributed by third parties. The opinions, facts and any media content in them are presented solely by the authors, and neither The Times of Israel nor its partners assume any responsibility for them. Please contact us in case of abuse. In case of abuse,
Report this post.

Entering the former U.S. Embassy compound in Tehran, now a museum called the Den of Espionage, I vividly remembered the images from November 1979 of the pro-Ayatollah students smashing the gates and scaling its walls. Sixty-Six American diplomats and embassy employees were taken hostage, 52 of them, often blindfolded and paraded in front of jeering crowds and TV cameras, remained there for 444 days before their release.

This reality of the contrast between the U.S.-Iran government relations then and now, with the way a rare American tourist is so sincerely welcomed, reflects for me the complicated and even contradictory feelings I had as a returning visitor.

Finding the Iranian people warm and welcoming, homes are as likely to have at hand works of the 14th century beloved and often-quoted Persian poets, Hafez and Sa’adi, as they are to have a Koran. In the modern, educated society that has largely been defined by the 1979 Islamic Revolution, the 1980-88 Iran-Iraq War and economic sanctions, a visitor easily sees and feels life’s tensions and challenges on the streets. The totalitarian theocracy run by an anti-American, anti-Zionist, anti-Sunni Islam, conspiracy-filled, propaganda-spewing regime, does not in my opinion, impinge on the day-to-day safety of a Western tourist.

During my visit in 2014 and on my return in December 2016, I met in Tehran and Shiraz descendants of this rich, 2,500-year-old Jewish heritage. With up to an estimated 20,000 Jews, Iran has the largest Jewish population of any Muslim country with the possible exception of Turkey.

On a busy street in the city of Hamadan about 200 miles west of Tehran, behind a high gray fence, is a stone-slab door leading to a 14th century tomb tower.  Traditionally, this is considered to be the burial site of Esther and Mordecai, with inscriptions in Hebrew identifying the tombs as such.

On ringing the bell, 80-year old Rabbi Rajad appeared, handed me a kipah and opened the heavy door into the tomb which consisted of an outer and inner chamber with a 50-foot high dome. For more than 2,000 years this tomb has been a spiritual focal point for the Jews of Iran, their most important Jewish pilgrimage site, though there are now few visitors. Some of the Hebrew inscriptions have been repainted so often by people who likely didn’t understand them, that they now appear as Hebrew-looking jibberish. Rabbi Rajad’s broken Hebrew enabled us to communicate pretty well. Along with a tip for the free-admission visit, he was pleased that I also gave him a San Francisco Giants pen, as Lonely Planet mentions he’s an avid collector of foreign pens.

There are certain commonalities I observed between the Jewish communities of Tehran and Shiraz. While Tehran generally has economically wealthier Jews, both are centered, and within walking distance, of their k’neisah, or synagogue, a gathering place for their communities and where children often come for breakfast and Jewish studies before heading to school. The K’neisot are traditional, Mizrachi orthodox in practice, the younger people knowing prayer book Hebrew well and some of the older also knowing Hebrew as a conversational language.

Overheated and brightly lit with yud, hay, vov, hay above the ark, the service leader is on a bimah among the congregation, and the perimeter is lined with narrow tables and chairs. The women’s section is in the balcony or sectioned on the main floor.

Surprised that I was Reform and Ashkenazi, Jews I met understood “Reform” not as a movement, but rather to describe all non-orthodox observance. Reflecting their curiosity and ignorance of the subject, I was asked: “why do so many Reform Jews marry non-Jews?”; “do Reform light Chanukah candles?”; is it true that the Reform put tefillin on dogs?”.

Each evening at 6:30 except Shabbat, making use of the ever-present satellite dishes found in seemingly most homes, many Jews tune in to the Farsi language radio station originating from Israel to listen to the news from there.

In Tehran at the well-maintained Yusef Abad synagogue, Saturday services were so crowded and had so many boys chanting from the Torah, that Torah reading occurred on two separate bimahs. When each boy finished their chanting, ululating and the tossing of candies came from the proud mothers in the women’s section. This particular Saturday happened to be the Prophet Mohammed’s birthday, a national Iranian holiday, so all the children were off school. This enabled them to come to services when they normally would only attend in such large numbers on Friday night.

Cream-filled pastries and juice boxes, served by men and boys, were distributed to the full congregation during a 20-minute break between Shacharit and Musaf. I was told that the generous amount of goodies was greater than usual on this Shabbat as it was provided by a couple married earlier in the week who were honored at services.

As I’ve come to expect, I was invited back to a home for lunch (in fact invited by several people) where I walked with family members, the men wearing kippot, something I didn’t see outside the synagogue I visited in Shiraz.

In Shiraz at the Rabizadeh synagogue, the walls needed patching and paint. Friday night services were filled with young and old, some looking in from the courtyard. One of the most enduring memories I have is of the chanting of l’cha dodi. Led by the children and chanted loudly by all, with emphasis at a spot in each verse where the children’s voices, raised in unison, seemed to shake the walls. I closed my eyes. I have a fantasy of a Spielberg-like documentary called “L’cha dodi” being made as the basis to show the Jewish and non-Jewish world the beauty and richness of this community.

Walking home with the same family I met two years earlier, I arrived to the aromas from the prepared food in the small kitchen and from pots on the living room steam heater. Welcoming Shabbat with Shalom Aleichem and Kiddush, tablecloth set on the floor, we began with fruit, nuts, fresh greens, grilled trout and flat bread, all eaten by hand. Infused by the homemade raisin-based vodka and wine, we danced, sang and drummed on kitchen pots. The meal continued, thankfully with utensils, which included rice-crusted dishes with layers of potato and chicken (they have a community shochet – a ritual slaughterer), fesenjun (which is chicken in walnut and pomegranate sauce), eggplant, beans and vegetables, flavored with various herbs including barberry and saffron.

There were a few occasions during my visit when, not surprisingly, I was asked about Donald Trump. The strangest such occurrence was Saturday morning. I was given the honor of an aliyah and, following the Torah chanting and my blessing, a brief conversation of the four other men on the bimah with me ensued. It included a comment in Farsi in which I picked up the word “Trump”. I looked at the speaker, turned away and made a motion of being sick to my stomach, then I said and pointed, “not in front of the Torah”, to which they all laughed, with the congregation wondering what was going on.

Following Saturday morning services and lunch at home consisting of Friday night leftovers, while the rest of the family napped, two family members and I went for a long walk through Shiraz. They pointed out the many Jewish-owned stores on a main street, most of which were clothing stores, closed for Shabbat. They wanted me to experience faloodeh, a dessert that originated in Shiraz, consisting of thin vermicelli noodles made from corn starch mixed in a cold syrup made from sugar and rose water served with lime juice and ground pistachios. We had a slight dilemma as they wouldn’t use money on Shabbat and, consistent with my entire visit with them, wouldn’t let me pay for anything as a guest. So how do I get the faloodeh? The compromise was one of them gave me his debit card and told me the pin code to provide to the vendor.

I shared the first and second nights of Chanukah with my “family”. I found it interesting that, while oil is lit and prayers recited each night, in both the k’neisah and in the homes, my experience did not include special foods nor was oil lighting necessarily a time for all family to gather around. In the k’neisah, the chanukiah was lit in a corner of the synagogue as a brief break during the ma’ariv service. 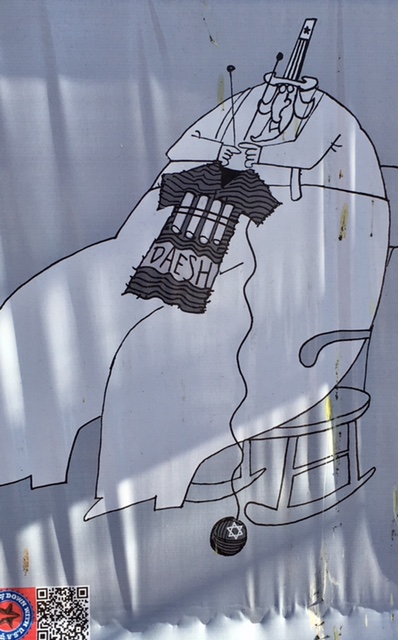 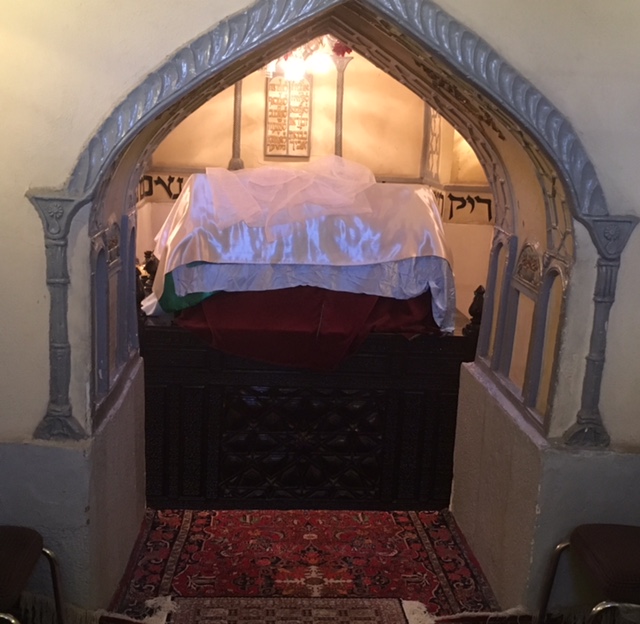 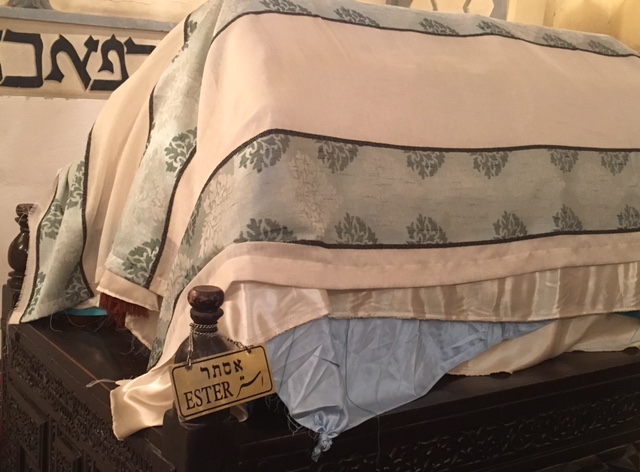 It was a great privilege to meet descendants of Esther and Mordecai. I deeply felt the warmth, familiarity and sense of truly being a part of the Jewish people. The beautiful palaces, shrines, mosques, bazaars and historic sites including Esfahan and Persepolis are themselves worthy of a visit.  For an American Jew, the welcoming Jewish community makes a visit to Iran even more unique and meaningful.

About the Author
Ron Lezell is an independent corporate accounting consultant, Treasurer of A Wider Bridge and a member of Congregation Sha’ar Zahav in San Francisco.
Comments