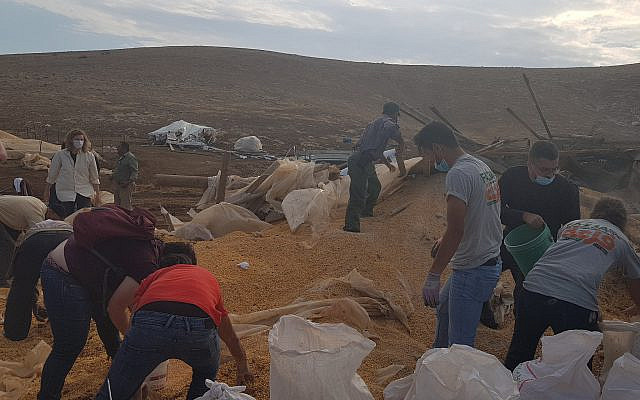 Shavua Tov. I returned from Khomsa on Friday in time to write this, but too late for it to be posted before Shabbat:

Eighteen years ago I was the first Israeli civilian to enter the Jenin refugee camp (with Palestinians and incognito) just a few days after the camp was razed. I wrote at the time,  “The site was not merely reduced to rubble – it was reduced to dust.”  I just returned from Khomsa, where this Tuesday Israel razed this entire Jordan Valley shepherding community. Eleven families. It has been reported that even in this record breaking demolition year, this was the largest operation in a decade. In nearby Bziq, seven tractors, five water tanks and five cars were confiscated. While no soldiers or civilians were killed here, as in Jenin, I had a similar awful feeling in the pit of my stomach. One of utter shock, numbing disbelief and overwhelming horror.  In both cases, the weekly Torah portion was VaYera, in which we read of the fire and brimstone totally destroying Sodom and Gomorrah. Now, as then, I ask whether there was an Abraham somewhere in the chain of command, arguing with the ruling power against the  planned destruction.

Eighteen years ago I wrote,

“This was not a massacre, in the sense that the IDF did not come in and intentionally target civilians.  However, at a certain point, the preservation of civilian life was no longer a big concern.  Clearly the IDF knew that they were bringing buildings down on civilians.  There was a decision to make – Do you kill civilians along with the armed resistance or do you either let them go or surround the area as was done in Ramallah and Bethlehem or go in from house to house and risk soldiers? … I saw the terrorist infrastructure yesterday – the hatred in the eyes of an entire people who want to be free from occupation, even as we want to be free of fear…We come and wring our hands and send aid afterwards, but did not/were not able to do anything to stop what happened….Shabbat is approaching and perhaps I will add something when I translate this to Hebrew on Sunday.  I don’t feel that I have even scratched the surface.  I can understand the dilemmas about sending soldiers into booby-trapped houses, the need to protect ourselves from being blown up, etc.  Some of our members had loved ones fighting there who are good, moral people.  On the other hand, all attempts to describe, explain, debate fade away when you are standing in Jenin.  It is clear that something happened there that was terribly wrong.   Nobody can stand amidst the destruction and with any shred of honesty say “This was justified.” All that fills one’s mind is, “WHAT HAVE WE WROUGHT?”

Shabbat is again approaching.  Again, all justifications fade away standing in Khomsa., The destruction, the mangled rubble, ruined  solar panels, destroyed animal feed and the tears. Eighteen tents and sheds housing eleven families, seventy one souls, forty one children, twenty nine tents and sheds used as livestock enclosures, three storage sheds, nine tents used as kitchens, ten portable toilets, ten  livestock pens, twenty three water containers, two solar panels, and feeding and watering troughs for livestock. The twenty to thirty thousand tons of scattered feed for the flocks that now have no shelter from sun or rain.  One of the resident told how they pleaded with the soldiers to no avail to leave them at least one water tank.

The army returned, as visiting European diplomats prepared to leave, and as Israelis and Palestinians joined forces to try to gather and salvage animal feed. None of the soldiers seemed particularly interested in being an Abraham, although I can hope that what they saw and what I tried to say to them reached some of their souls. When I suggested to a senior officer that he should read the story of Abraham arguing with God in this week’s Torah portion, he acknowledged that this was a human tragedy, but justified Israel’s right to unilaterally declare live fire zones in occupied territory and clear out those living there. Not only is this contrary to international law, it is simply wrong to undemocratically steal land from a disenfranchised  people who can’t vote for the Knesset and Government that rule over almost every aspect of their lives. The fact that some fifty four percent of the Jordan Valley has been declared live fire zones is a bald-faced attempt to steal and control land. Last year the army demanded that they temporarily leave during Ramadan in order to conduct an exercise, but didn’t prevent them from coming back. This year, they went much further.

In our Torah portion, God says, “Shall I hide from Abraham what I am about do do, since Abraham is to become a great and populous nation, and all the nations of the earth are to bless themselves by him?  For I have singled him out, that he may instruct his children and his posterity by doing that is just and right.”  (Genesis 18: 17, 18, 19)  We are Abraham’s progeny who are to learn from Abraham what is just and right.  Israel plays God with Palestinian lives, but we do not argue. Destruction reigns.

Eighteen years ago I wrote:

I wonder, “Where was Abraham when the decision was made?”  Was there even one person along the chain of command who argued, “Will the innocent be destroyed along with the guilty?”  We may never know.  If there was, nobody listened.  “Abraham’s” are hard to come by these days.

My quote from Abraham is inappropriate this time.  In the Jenin refugee camp there were terrorists.  Like in Sodom and Gomorrah, the question was whether or not the evildoers should be killed, and whether innocents should die along with them. In Khomsa, we thank God did not kill anybody, but this was not a question of separating innocents from evildoers. This was a shepherding community. Men, women and forty one children.

However, Abraham also demands of God, “Far be it from you! Shall not the Judge of all the earth deal justly?” (18:25). Now, as eighteen years ago, I ask was there an Abraham somewhere in the decision making process who argued and pleaded, and tried to persuade not to commit this evil?

If there was an Abraham within the decision making chain, s/he failed. Now the question is whether we will be worthy of calling ourselves the descendants of  Abraham? Will we do our best to argue with our government, to respectfully try to inspire our fellow Israelis to follow Abraham’s example of what is just and right? If that fails, will we fulfill our obligation to do what will cause more rage and earn us more opprobrium than almost anything else imaginable? Will we ask the international community to fulfil its duty under international law to intervene on the behalf of the helpless?