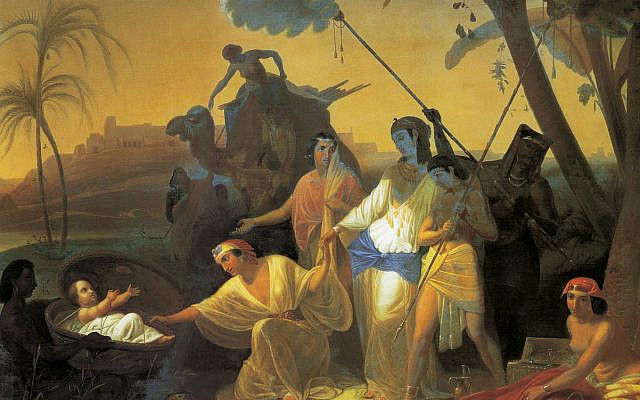 Was Moshe actually sent floating down the Nile river by his loving mother? What is Miriam’s role? How did Bat Pharoah know Moshe was Jewish?

The drama of Moshe’s origin begins when he is placed in the basket by his mother, Yocheved (Shmot 2:2-7). After hiding her son for 3 months in her home, Yocheved could no longer protect him from the royal decree that he was to be cast into the Nile. A dominant visualization of this scene depicts a desperate mother placing her child into a basket, cast adrift into the Nile river and watched from a distance by his older sister Miriam. She helplessly watched as the river serendipitously carried him along its course to the location of Bat Pharoah’s bathing. This version of events can be argued as the default colloquial understanding, even insofar as it earned itself Hollywood acclaim in the celebrated movie Prince of Egypt. While lacking textual sources for this harrowing trek down the Nile, the idea that Yocheved simply sought a compassionate means to distance herself from witnessing the demise of her child in hopes of a miracle has limited support (see Ibn Ezra 2:3).  However, the simple understanding of the text argues Yocheved’s actions are far more humane, motherly and strategic than this exaggeration would suggest.

A careful reading of the text reveals what many commentators have long known (see Chizkuni and Rashbam 2:3). Yocheved made a basket for her son to reside stationary within the reeds at the river’s edge. In 2:3 the verb ‘to place’ is used twice in juxtaposing phrases detailing contextual symmetry for a particular action. First Yocheved ‘places’ Moshe into the basket. This act of ‘placing’ is stationary. The very next word is the second instance of ‘placing’ which is the placing of the basket within the ‘reeds at the river’s edge’. The textual juxtaposition communicates the identical nature of the two events. Just as the first placement was stationary, so too the second is stationary. The basket was never cast free into the river’s current nor any uncontrolled state. Yocheved intended to continue what she had previously successfully accomplished at her home for the prior three months; to hide her son and protect him. Only now she would have to do it at the river’s edge. At three months old Moshe was likely too large and active to confidently keep quiet secretly within their home. At the river’s edge she would have distance from her neighbors and the background noise of the river to obscure his cries and allow her continued care for him.

Knowing that he was safe, Yocheved could return to her work, preventing further suspicion by her absence. However, she could not care for him all day without bringing attention to herself and him. Miriam, a young child at this time, could more safely stand guard in the area to make sure that Moshe was safe. Should he cry she could console him, and if further care was needed, she could alert Yocheved who could carefully return and care for him as needed. While not a perfect plan, it was at least better than the certainty of being discovered in their home. All the more so, it allowed her to continue to actively care for her child rather than cast his fate to chance by sending him down the river.

The care and compassion of Yocheved’s plan stands in stark contrast to that of another mother, Hagar, the Egyptian maidservant of Sarah. When exiled from Avraham’s home with her son Yishmael, Hagar is faced with a terrible scene (Breishit 21:14-16). Alone in the desert, exhausted of water, Yishmael is on the verge of death. Lacking any resources to save him she casts him a distance away from her so as not to witness his demise. Hagar is not heartless or lacking maternal instinct. She cries bitterly at what she saw as an inevitable conclusion to her beloved son. Nonetheless, she chose that her son’s final moments occur in her absence. Post-hoc judgments for such an inconceivably traumatic experience are admittedly unfair, nonetheless objectively her choice was to mitigate her suffering at the cost of her son’s final moments of comfort. Hagar became antithetical to the Jewish mother motif at that moment. Had Yocheved sought to mitigate her own suffering in the final moments of her son’s life knowing of his inevitable death (Ibn Ezra, Shmot 2:3) then she would have been no different.

While this location in the river provided the perfect conditions for hiding a baby, it likewise facilitated the seclusion ideal for a princess’ bath.  This is why Bat Pharoah serendipitously happened upon the basket. This unexpected surprise left Miriam unable to do anything but watch since she must assume that the princess would kill the baby if she knew it was a male being shielded from death. There was no point in revealing herself as an accomplice since she might lose her life as well for aiding the conspiracy, or worse, identify her family as the culprits. This is why Miriam does not reveal herself until after the princess demonstrates her acknowledgment that the child is Jewish and intends to show compassion (2:7).

The text provides no discrete explanation for Bat Pharoah’s determination that Moshe was a Jewish baby. The most obvious conclusion is that only Jewish boys were decreed to die, therefore only they would be found in such extreme circumstances. However, Pharaoh’s decree for all the baby boys to be cast into the Nile can be understood as having been imposed on everyone, Egyptian and Jew alike (1:22). Yet somehow the princess quickly deduced the boy was Jewish. The most obvious answer is that she noted his circumcision. An alternative, albeit less likely explanation could be that she would not have expected an Egyptian mother to have made such an extreme effort to save her son. One could extrapolate from the behavior of Hagar that other Egyptian women would prefer to abandon their ill fated children. Therefore, if a mother went to this extreme then she must be culturally different. Another creative solution is to suggest that Yocheved was technically fulfilling Pharaoh’s decree.  Pharaoh never decreed the death of the child, only the fact that it must be cast into the Nile. Admittedly this deviates from the nuance that there was no ‘casting’ by Yocheved as she had ‘placed’ the basket into the river’s edge, nonetheless the child ended up in the Nile. This legal technicality and nuance is congruent with the notion of Jewish legal ingenuity (see Sforno 2:3).