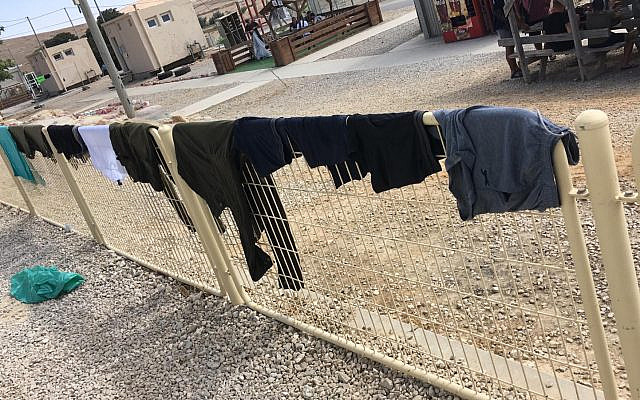 Washing on the base (photo credit Rafi Samuels)

My son, Rafi, is back from the army next week and I’m both excited and scared in equal measure.

That’s the scary part. It fills me with both dread and a little frisson of excitement. You see, I’ve always had a strange relationship with washing. An empty washing basket is a thing of sadness. On the rare occasion when it happens, I ask everyone repeatedly if they have any washing for me. I feel redundant without a large pile of washing to get through.

Next weekend I’ll probably be facing one of the most exciting washing challenges I’ve ever faced.

You see, my boy, Rafi will be coming home from the army, having spent three weeks in uniform, in the boiling desert heat, whilst pursuing rigorous, daily physical activities. He has nothing but a bucket and a sink at his disposal in which to ‘wash’ his uniform and underwear once a week, if he’s lucky.

I’ve been warned by those who have gone before me to open his army bag straight into the washing machine while holding my breath. No chance! I’ll be sorting the darks and lights, making sure the socks are the right way round and checking his pockets for bullets (I’m told they can really damage the machine).

I’m more than ready for the challenge which lies ahead. I’ve spent much of the last week trying out all of the different wash cycles on my machine in order to ascertain which is the most suitable. I’ve given a lot of thought to whether I should wash everything on 40 or 60 degrees. I’ll probably use the ‘easy care’ cycle and see how it goes. I’m a novice at this after all, so I’m not going to be too hard on myself.

The most important thing by far is to be prepared. I’ve always sworn by the six P’s and this is no different:

As you’d expect, I’ve devised a washing plan for the week leading up to his return. This plan will ensure that all of our washing will have been done and put away by the time Rafi arrives home on Friday afternoon. The machine will be empty, as will the clothes maidens and the tumble dryer (should the need arise). I’ll be ready to go from the moment he steps through the door and hands me his army bag. It’ll be all systems go! No one else’s clothes will get a look in for the duration of his stay.

So, while the rest of the country is gearing up for the start of the new school year this week, I’ll be gearing up for one of the most exciting challenges of my life….the ‘three week desert army uniform washing challenge’…wish me luck!