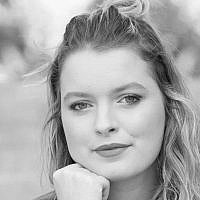 The Blogs
Phoebe Bruce
Apply for a Blog
Please note that the posts on The Blogs are contributed by third parties. The opinions, facts and any media content in them are presented solely by the authors, and neither The Times of Israel nor its partners assume any responsibility for them. Please contact us in case of abuse. In case of abuse,
Report this post.

I was building a desk-chair from Ikea when the first sirens went off; screwing little bolts into the base. The shriek began to sound outside, and I froze for a moment, hand still holding the screwdriver. It’s happening, I thought. They really are trying to bomb Tel Aviv.

Before moving to Israel, I imagined Jerusalem and Tel Aviv as two fractured pieces – Jerusalem – the “ancient”; an artefact of religion, stories, and stone – and Tel Aviv — the “reborn”; a holy land of club-hopping, beach days, and casual sex. Jerusalem had always existed among conflict, but Tel Aviv was supposed to be different: an oasis; a safe-space impossible to remove from orbit.

On Tuesday May 11, our city was interrupted. I was building a desk-chair from Ikea when the first sirens went off. They really are trying to bomb Tel Aviv.

I dropped the screwdriver and began scrambling for the bomb shelter, pulling my two roommates alongside me; we were one big mess of arms and legs, all tumbling together out of the door.

It was supposed to be our first night sleeping together in the apartment. I had nothing but a bed-frame in my room, and our cardboard moving boxes were still sitting in messy heaps in the kitchen. I realized halfway down the stairs that I didn’t actually know where the bomb shelter was – surely somewhere on the lower floor, but where? I never asked the landlord … it didn’t seem imminent.

“Do we need a key to get in?!” I screamed to my roommates further up the stairs. “Do we need a key?!” More frantic voices filled the staircase. We weren’t alone … behind us now were three women and one young child — a boy no older than seven, still in pajamas; eyes full of sleep. Our neighbors. We hadn’t met yet.

“Come! Come!” they shouted to us in Hebrew, pushing ahead of us on the stairs so we could follow their path. When we arrived at the ground floor, we found the bomb shelter on the left already unlocked. Rushing our bodies through the entrance, the sides of our clothes brushed against the cement wall and were marked with traces of sand and dust. I realized I didn’t have shoes on.

Once we were all closed securely inside the bomb shelter, we came to a circle … strangers’ eyes meeting for the first time in some odd moment of unity and terror. They really are trying to bomb Tel Aviv.

I thought I saw my roommate crying. I wasn’t afraid, but I could feel my body vibrating – adrenaline rattling my bones beneath the skin like my insides were filled with wasps. Wasps. When I was a child, I ran away from wasps – now I run away from rockets.

Between the sirens, we began to hear shuddering booms cutting sharply through the air and then ricocheting for a moment, like a peal of thunder, or a bare hand smacked hard against an empty, metal locker. After every boom, we looked at each other with desperation, each of us hoping for some confirmation none could give – was that a rocket or an interception? Are our loved-ones safe?

I noticed there was a dog in the shelter – a black Pekingese; the little boy holding his fur tightly in both fists. I also wanted something to hold on to. I wished I had brought the screwdriver. “If the rocket hits my Ikea chair, I am going to be pissed” I mumbled awkwardly, trying to make myself smile, as if we weren’t all afraid of dying. “I didn’t even get a chance to finish it yet.”

Every once in a while, the sirens gave way to silence, and we looked nervously towards the door, as if asking the skies themselves to give in and let us go home. Each time, a few minutes passed and then the sirens restarted; the boy again tightly holding, the dog itself now shaking, and all of us hoping for an end.

After one hour in the shelter, we stumbled back up the stairs to our apartments; seven rattled stragglers hoping not to meet again in the night. I rushed back to my bedroom floor, picked up the screwdriver, and began to assemble the chair again, but this time with some kind of desperate ferocity. At one point, I realized I had inserted six bolts directly into the screw-holes on the seat, forgetting to attach the chair’s arms in-between. A chair without arms … how funny would that be? I started to unscrew each one by one, moving slower to make sure I made no mistakes.

I finished building the chair five days ago, but I might take it apart, and assemble it again. I need the catharsis; the distraction. I planned to buy a closet too, but I no longer can because the Ikea was bombed today, a smouldering hole the size of my apartment now spanning somewhere between the entrance and the warehouse.

I find the most calm in the moments of normalcy – brushing my teeth, pouring milk in my coffee, making love. I cling to every remnant of the Israel which existed one week ago. I still can’t understand that she is gone, at least for now.

About the Author
Phoebe Bruce is originally from Boston, Massachusetts, and made Aliyah to Israel in October 2020. Phoebe currently studies psychology and Israeli history at Tel Aviv University. In her free time, Phoebe enjoys playing guitar, drinking tea, and snuggling up with her cats.
Related Topics
Related Posts
Comments