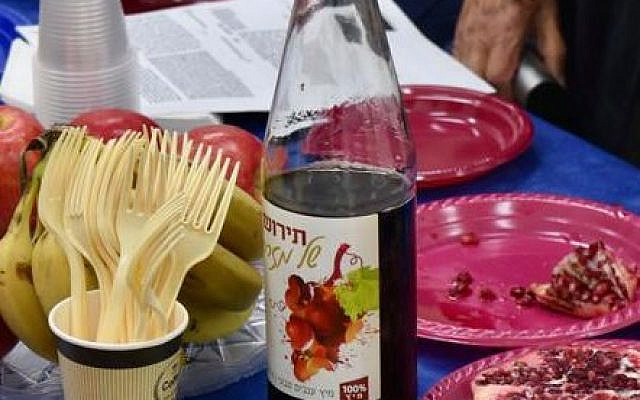 In the Talmud, Brachot 57a we learn about the significance of the Shivat HaMinim, the Seven Species of Israel, when they appear in our dreams:

Rabbi Ḥiyya bar Abba said: One who sees wheat in a dream has seen peace, as it is stated: “He makes your borders peace; He gives you in plenty the fat of wheat” (Tehilim 147:14).

One who sees barley [se’orim] in a dream has received a sign that his iniquities are taken away, as it is stated: “And your iniquity is taken away [vesar avonekh], and your sin expiated” (Yishayahu 6:7); se’orim is an acronym for sar avon. Rabbi Zeira said: I did not ascend from Babylonia to Eretz Yisrael until I saw barley in my dream.

A vine laden with grapes in a dream is an omen that his wife will not miscarry, as it is stated: “Your wife shall be as a fruitful vine, in the innermost parts of your house” (Tehilim 128:3). One who sees a planted vine branch in a dream should anticipate the Mashiach, as it is stated: “Binding his foal unto the vine and his donkey’s colt unto the vine branch” (Breisheet 49:11).

A fig tree in a dream is a sign that his Torah is preserved within him, as it is stated: “One who keeps the fig tree shall eat the fruit thereof” (Tehilim 27:18).

Pomegranates in a dream: If they were small, his business will flourish like the seeds of the pomegranate, which are numerous. If they were large, his business will increase like a pomegranate. One who saw slices of pomegranates in his dream: If he is a Torah scholar, he should anticipate Torah, as it is stated: “I would cause you to drink of spiced wine, of the juice of my pomegranate” (Shir HaShirim 8:2), which is traditionally understood as an allusion to Torah. And if the dreamer is not learned, he should anticipate mitzvot, as it is stated: “Your temples are like a split pomegranate” (Shir HaShirim 4:3). What is the meaning of the word “Your temples [rakatekh]”? Even the most ignorant [reikanin] among you, Israel, are full of mitzvot like a pomegranate.

One who sees palm trees [temarim] in a dream has seen a sign that his transgressions have ceased, as it is stated: “Your iniquity is finished, O daughter of Zion” (Eicha 4:22), as the Gemara likens temara, date, to tam ra, evil has ceased.

We see from here that dreams which include the Seven Species of Israel are omens of good luck. So enjoy your Tu B’Shvat fruits today and maybe you will dream about them tonight!