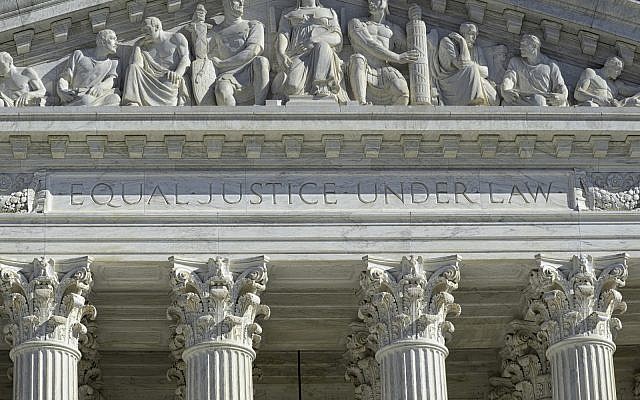 Detailed view of the front of the Supreme Court in Washington, DC. (iStock)

Americans went to the polls for an election in the midst of a raging pandemic.  Already 101 million had voted by mail or early in person. Coronavirus forced authorities to adopt new rules to make the election manageable, especially for those affected by or vulnerable to the virus.  Following the script of the 2000 election, when they induced five conservative justices to stop the count and install George W. Bush in the White House, Republicans filed lawsuits. The litigation aimed to throw out as many votes as a possible cast before Election Day and any tabulated afterward. In a post-election statement, President Trump threatened to have the Supreme Court give him victory.

The controlling opinion in 2000, Bush V. Gore, twisted the existing Equal Protection Clause and a federal law to insert the federal government into an area the Constitution reserves to states.  Handing the election to Donald Trump would require inventing Constitutional provisions and writing new law altogether. Already four justices signed on to one or more of three dubious theories that would let the Supreme Court dictate the rules.

The Constitution protects the right to vote.  However, Article II, Section 1 delegates the mechanics of federal elections to the states.  In particular, “Each State shall appoint in a Manner the Legislature thereof may direct” electors equal to the number of federal legislators that state sends to Congress.  Over time, state laws have evolved from legislative appointment to popular election of members of the Electoral College. Elections have evolved from sole in-person voting to a medley, including the mail-in and early voting variety.  State laws also govern the deadlines for receipt and counting of absentee ballots.  All along, state courts interpret and apply state laws.

Except for the Florida canvass in 2000, the system generally runs smoothly. The pandemic changed all that.  States moved to accommodate the sheer volume of mail-in ballots and safety concerns surrounding in-person voting. In Pennsylvania, for example, the State Supreme Court applied the State Constitution to require officials to count ballots postmarked by midnight November 3 and received three days later. State law required receipt on Election Day.  Republicans twice tried to sue in order to restrict the franchise.  The US Supreme Court on a tie vote declined. However, when a federal court in Wisconsin tried the same changes, the Supreme Court disallowed the move.

Four conservative justices in these cases have laid out three ways to justify limiting the franchise. https://www.supremecourt.gov/opinions/20pdf/20a66_new_m6io.pdf  https://www.supremecourt.gov/opinions/20pdf/20-542_i3dj.pdf Two claim to rely on the text of Article II, Section 1 to cut out state or maybe even federal courts; the third  would create a non-existent right.

The narrower theory of Article II adopts an opinion by three justices (including Justice Clarence Thomas) in Bush v. Gore.  Out of thin air, they reasoned that, because the Constitution delegates presidential elections to states, the federal courts, not the state judiciary, must interpret state election law.  This violates conservative ideology and a rule that Justice Brandeis articulated in 1938.  He held: when federal courts consider questions of state law (as in suits between residents of different states), the Constitution mandates they defer to the highest state court, even if it requires a referral.  Of course, consistency has nothing to do with it, only that  the Supreme Court should have a free hand to decide presidential elections.

The broader version holds that the text of Article II says “Legislatures,” and they alone decide.  If that eliminates federal as well as state judges, lawmakers can run amok.  For example, Republican legislatures in the key states of Pennsylvania, Wisconsin and Michigan could adopt a new procedure after the election to nullify the popular vote and appoint Republican electors.  The party could hijack the election.

The third theory mimics Trump’s remarks on Election night. Only votes counted by midnight November 3 count. Tempting in the age of television and the internet, this theory has no basis.  States actually certify official results days or weeks after the polls close.  Moreover, such a limit blocks mail-in ballots, which many states count later. It assumes that, this year, unlike historically, same-day voting favors Republicans.  Ironically, those who would adopt this policy argued in 2000 to include as many mail-in ballots as possible, even those arriving late, to ensure more votes for the Republican.  Like the holding in Bush v. Gore, the precedent would self-destruct in five seconds.  .

Will Justice Amy Barrett, whom Trump nominated in order to rule on the election, make five?