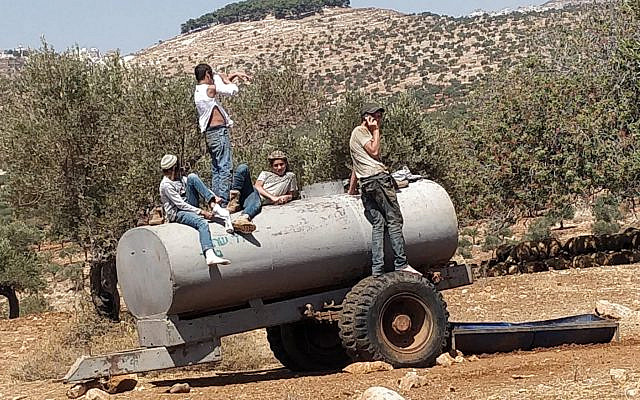 Shavua Tov. With some modifications/additions, this was my dvar Torah for this past Shabbat:

Ki Tavo, the Torah portion we read this past Shabbat (and all last week), opens “When you enter The Land that Adonai your God is giving you……” (Deuteronomy 26:1).

Today we are in The Land.

Subsequent to Moses speaking these words, Joshua brought us into The Land. We enjoyed its  bounty, and observed the command to bring first fruits to the place that God chose (26:2).  We acted in ways that Moses warned would lead to our expulsion, and during the long years of exile Moses’ warning often rang true, “Yet even among those nations you shall find no peace, nor shall your foot find a place to rest…The life you face shall be precarious; you shall be in terror, night and day, with no assurance of survival.” (28:65-66).

Now we have, returned, as was also prophesized. While there is a difference of emphasis in various Jewish sources between God’s distant transcendence and God’s immanence, I certainly believe that God is all places at all times. When I pray, and also in mundane activity, I try to feel God within me and around me.   “Seek God’s Presence constantly” (Psalm 104:5, I Chronicles 16:11). It is this awareness that leads to the wonder that Rabbi Abraham Joshua Heschel enjoins us to regain. Or, perhaps it is the wonder that leads to awareness.

:It is taught in a baraita: Rabbi Shimon ben Yoḥai says: Come and see how beloved the Jewish people are before the Holy One, Blessed be God. As every place they were exiled, the Divine Presence went with them. They were exiled to Egypt, and the Shekhina went with them, as it is stated: “Did I reveal myself to the house of your father when they were in Egypt?” (I Samuel 2:27). They were exiled to Babylonia, and the Shekhina went with them, as it is stated: “For your sake I have sent to Babylonia” (Isaiah 43:14). When they went into exile in Edom [i.e. Rome], the Shekhina accompanied them as Scripture states: “Who is coming from Edom…” (Isaiah 63:1, missing in our printed editions because of medieval papal censorship). So too, when, in the future, they will be redeemed, the Shekhina will be with them, as it is stated: “Then Adonai your God will return with your captivity” (Deuteronomy 30:3). It does not state: God will bring back, i.e., God will cause the Jewish people to return, but rather it says: “God will return,” which teaches that the Holy One, Blessed be God, will return together with them from among the various exiles. (Babylonian Talmud: Megilla 29a)

Note that the final line doesn’t just speak about the Shekhina, but God in God’s Totality.

The Midrash goes even farther, and speaks of the human actions that drove the Shekhinah further and further into the distant heavens, while other actions brought the Shekhinah back to earth, concluding with the dedication of the tabernacle.  This midrash indicates that our actions can drive at least some aspect of God from The Land.

In the Amidah prayer we ask that we should merit to witness (literally, that our eyes should see) God’s return to Zion in rakhamim (mercy). However, we then bless God who brings God’s Shekhina back to Zion.  Are we waiting for God, in God’s Totality, or one aspect of God – the Shekhina? Perhaps this change of wording reflects an internal tension as to whether God can entirely be not present in any place.

Sometimes we also speak of “hester panim.” God is present, but God hides God’s presence Our Torah portion does not say that God will not be present if we carry out the list of cursed actions. It is we who will be punished, and go into exile. However, hester panim is one of the greatest of all possible punishments.

God, the Shekhina, hester panim. At some level, the fact that we still pray for God, or some aspect of God to return means that God is not here in God’s Entirety. It makes sense to me that the aspect of God that has not yet returned/that we do not see/his hidden from us, and/or we do not adequately reflect, is God’s Rakhamim. Is that because of our actions? Will the return of God’s rakhamim inspire us to act with rakhamim, or could it be that God’s Rakhamim will not return until we do a better job of acting with rakhamim?

And one more thought about rakhamim. In rabbinic literature, the punishment of the Egyptians was mercy for us. That is not the rakhamim I pray for. When I pray these words I pray that on the day that whatever aspect of God is not yet present in Zion returns, it will be that aspect of God that wishes for rakhamim for ALL that God has created. That is the rakhamim that we so often lack. There are so many who act with rakhamim “to their own,” but not to those outside the boundaries they have established.  I would like to believe that, when God’s Tribute of rakhamim returns, humanity will be inspired to emulate. However, whether or not God’s Rakhamim is waiting for ours, we musn’t wait for God’s. Given that universal rakhamim is something we need much more of, we can and must make every effort to change during the month of Elul and the High Holy Days that follow.

The list of cursed actions in Ki Tavo is long and varied. They include many sexual crimes, but also:

One common denominator is the lack of universal rakhamim. When aspect of Godliness that should be ensconced within us is missing, we act in cursed ways, and bring curses upon ourselves.

All last week I documented settlers on land not theirs. They were trying to erase the landmarks of the Palestinians who see them as intruders because of their actions, not neighbors. They literally break down the fences that mark land ownership. For years we have been struggling to have these intruders and thieves prosecute. Our security forces have been less than cooperative.

No bribe money necessarily passes hands when our security forces do not make the same effort to bring to justice those who have killed innocent Palestinians, but we know how rarely they are caught. If the murderer is a soldier, no matter how clearly the murder was in violation of military orders, we will be hear an outcry that the soldier is “everybody’s son,” or that he made an allowable error in a military situation. And yes, that soldier may have been in fact acting according to unwritten directives from the untouchables on high.

Do not subvert the rights of the non-Jew living among us, the orphan and the widow? Tell that to those threatened with eviction from public housing….

Our tradition tells us that misleading the blind is not just those who literally cannot see, but taking advantage of people’s weaknesses. We can include those who use demagoguery and fake news to mislead the public.

Rabbi Samson Rafael Hirsch teaches of another sort of blindness.  We are outwardly pious, while harming others in ways that most cannot see (or do not wish to see.)

“All blessing is denied to the one who outwardly plays the pious person devoted to God, but in secret denies the exclusive existence of One God and God’s Rule; who outwardly is respectful to his/her parents but inwardly considers him/herself vastly superior to them, who in the eyes of others preserves the reputation of an honest person but, where it is unobserved, does not hesitate to injure the rights of his neighbor to his own advantage; who is full of enthusiasm for the welfare of his neighbors , in the presence of clever and intelligent people, but pushes short sighted and blind people into misfortune, who grovels before the powerful but denies the weak and helpless their rights….

Not only can God hide God’s self from us, we can blind others with an outward presentation that hides the truth. Those who are blinded to the true nature of those who act without rakhamim, are more susceptible to being misled into acting without rakhamim.

One more thought and sight and blindness. On Friday my daughter watched the movie version of Les Miserables. Almost the last words of Jean Valjean are “To love another person is to see the Face of God.” Recall that when Jacob reconciles with Esau, he says that “to see your face is like seeing the Face of God” (Genesis 33:10). When I pray in our morning prayers, “May a new light shine upon Zion,” I pray that God’s Light will help the blinded to see God in every human being. God’s Face is hidden because we need the spiritual insight to see God’s Face in the face of every human being. As I pray, I hold in my heart all those who dwell in Zion, and visualize some of those who most need that Light, including Israeli and Palestinian leaders, soldiers and settlers, terrorists and those who sit in their offices and push oppressive economic policies.

We pray that all will soon benefit from that Light, that the hidden will be revealed, and that we will enjoy the blessings Ki Tavo promises when we act with the awareness that Light brings