The Blogs
Avraham Bronstein
Apply for a Blog
Please note that the posts on The Blogs are contributed by third parties. The opinions, facts and any media content in them are presented solely by the authors, and neither The Times of Israel nor its partners assume any responsibility for them. Please contact us in case of abuse. In case of abuse,
Report this post. 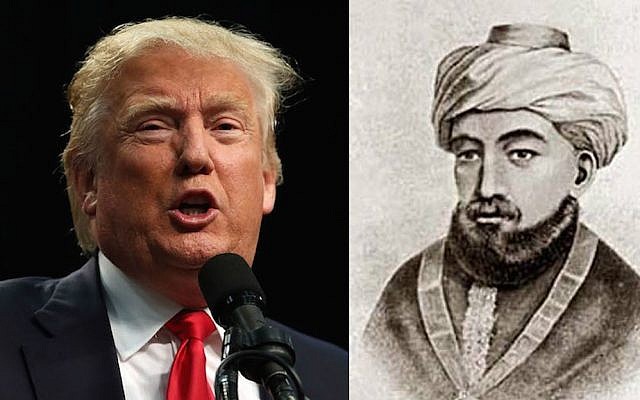 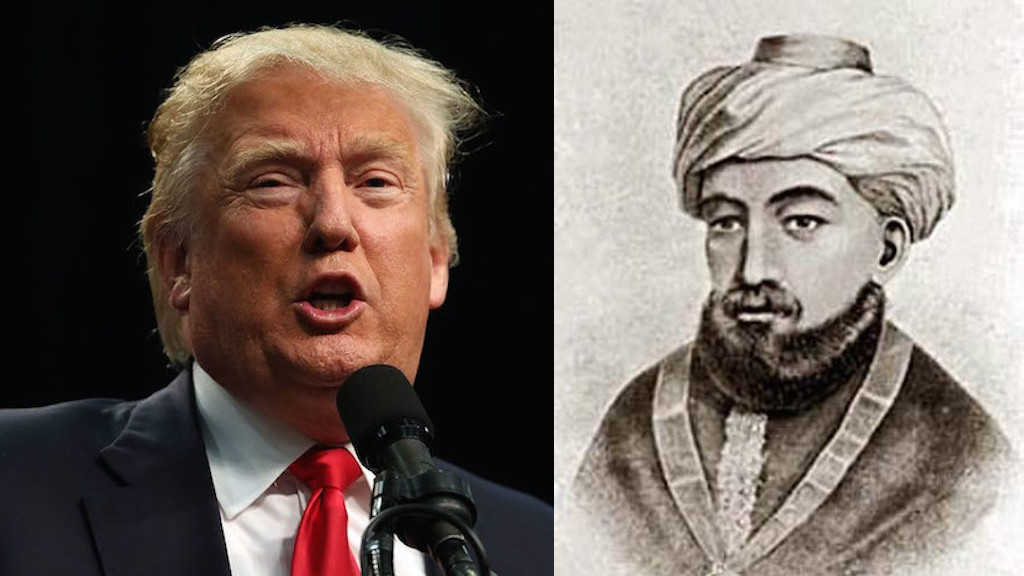 Restoring the past vs. improving on what came before. Donald Trump at a Republican rally in San Diego, May 27, 2016. (Spencer Platt/Getty Images) / Maimonides (via Wikipedia commons)

A poignant rabbinic tradition states that as Jerusalem was sacked and the Temple burned, the Messiah was born. An echo of this hopeful teaching reverberated throughout Donald Trump’s acceptance speech at the Republican National Convention, but in a twisted and disturbing form.

In his speech, Trump presented himself as nothing less than a modern-day Messiah. His case for himself was predicated on his assertion that the Temple is burning — that America has slid into a state of hurban (devastation) such that, in his own words, “I alone can fix it.”

As Franklin Foer explained, “His ability to conjure fear is what distinguished him from all those career pols he has vanquished…He turned down every entreaty to run for president, beginning in the late 1980s, waiting for the moment when the sense of despair justified his entry into the game.”

Trump’s call to “Make America Great Again” bears some similarity to the emotional climax of the Book of Lamentations, when the prophet, surveying the desolate wreckage of Judea, exclaims, “Return us…renew our days as of old!” The nostalgic power of that verse is essentially what resonates with Trump supporters as they thrill to his pledges to reopen abandoned coal mines or bring shuttered factories back from China and Mexico.

In truth though, there are good reasons that those jobs disappeared — they were environmentally destructive and no longer economically viable. In truth, even when they did exist, they tended to be dangerous jobs with poor conditions that took decades of union agitation to return an appropriate wage to the workers. Trump, though, promises, by sheer force of personality, to bring back a sepia-toned past that never really was, and certainly is not the best path forward now.

Trump’s angry campaign against America’s changing demographics, gender roles, economy, and place in a rapidly moving and increasingly interconnected world finds an ancient parallel in the figure of Simon Bar Kokhba, who took on the Roman Empire in a desperate, messianic revolt in the year 132.

Bar Kokhba’s program was, in short, “Make Judea Great Again.” Like Trump, his solution was to forcibly undo history and restore the remembered glory of previous generations. One can almost hear him shouting Trump-like slogans to rally his forces. “We never win anymore, but I will make us win again!” “We will take our country back!” In the end, Bar Kokhba led his followers to disaster. Thousands of those who believed in him paid with their lives, and the traumatic effects of his revolt, after it was inevitably crushed by the Romans, lingered on for centuries.

The majority of the rabbinic establishment, however, had the perspective to understand that, as bad as things seemed following the fall of Jerusalem, all was not lost. As a result, they retained the ability to move forward, not backward. In fact, Maimonides considered the reformulation of Jewish practice without a Temple cult, but with a new focus on prayer, philosophy, and Torah study, a net improvement over what came before. A student of the classical philosophers, he felt that the Temple service was a concession by God, formulated to appeal to a people who had lived among pagans and had become accustomed to their modes of worship. The destruction of that paradigm was painful and costly, but also laid the foundation for new opportunities that had never before been given the chance to emerge.

At the Democratic National Convention, Rep. Sherrod Brown struck a similar note when he listed the Ohio manufacturing centers that have begun to emerge from their long declines, with factories refitted and workers retrained to take leadership roles in the development of new technologies and clean energy. Where Trump describes the “Rust Belt,” Brown described an increasingly revitalized “Industrial Heartland.” Where Trump presented himself as the Messiah who will restore the past, Brown described a different kind of organic leadership, no less messianic in its own way, working its way towards the future.

The ritualization of Tisha B’Av, while primarily focused on the fall of Jerusalem and its Temple, has come to serve as a catch-all day of mourning for many of the great tragedies of Jewish history. Perhaps this reminds us that destruction and loss is not a one-time event with a clearly marked before and after. Rather, it occurs constantly as the world changes. Industries are disrupted, established ways of life become unsustainable, and the familiar social and economic arrangements that once preserved peace and order shift and fade away. At the same time, though, each successive destruction also brings the opportunity for rebirth, for progress, and for redemptive creativity. This is the inspirational message of Tisha B’Av, and a lesson for us to take to the polls in November.

About the Author
Avraham Bronstein is rabbi of The Hampton Synagogue in Westhampton Beach, NY.
Related Topics
Related Posts
Comments