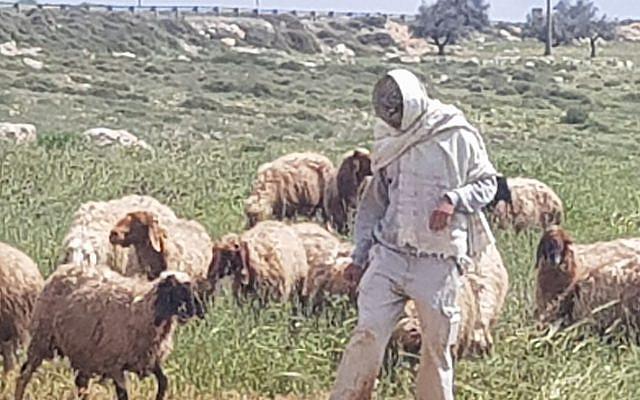 Settler and His Flock on Palestinian Land April 10th, 2020

Because this Shabbat is one of the intermediate days of Passover, we read how God reveals to Moses God’s 13 attributes and the subsequent restating of the Covenant, including the observance of Passover; the Passover sacrifices; Ezekiel’s vision of the dry bones that God restores to life; and the Song of Songs. I always derive hope from God’s willingness to give us a second chance, after the sin of the golden calf. The shepherding imagery of the Song of Songs comes to life, now that so much of my work is protecting shepherds from settler efforts to expel them, often backed by the army and police.

If you do not know, O fairest of women,
Go follow the tracks of the sheep,
And graze your kids
By the tents of the shepherds”
Your hair is like a flock of goats
Streaming down Mount Gilead (4:1, 6:5)

The imagery is beautiful and pastoral. It is truly breathtaking to watch from afar a flock of goats moving down a hill, flowing like water.

Unfortunately, like so much of human rights work, we deal with the dark side. Last Friday I wrote about how some police officers conveniently define our work documenting the setting up of new outposts is forbidden work, even though I have an express permit to do so and we carefully carry out our work in ways that respect Corona health regulations. These same police apparently do not view setting up a new outpost without a permit as a violation. That very Shabbat, theoretically religious settlers somehow felt it was permitted on Shabbat to chase away Bedouin flocks by driving their all-terrain vehicles and horses among the goats. The army did come this week to partially evacuate the outpost, but the settler cows and their feed are still there.

On Sunday we delivered a letter to the police and army protesting the fact that they were allowing settlers from yet another outpost to terrorize the Bedouin shepherds, apparently threatening them with knives not to return to their spring/summer homes. I understand that in one case they settlers tore down those homes to widen the path to their outpost, and another shepherd was intimidated into tearing down his own shacks. With our accompaniment, four other families returned this week, but the security forces refuse to take action to prevent the settler flocks from eating what they have planted there, literally taking the food from the Bedouin flocks. Between the rent they pay to the landowners, the money they spent on seed and renting tractors, and the ten thousand shekels per month of feed they will need to buy if they lose what they are growing this could spell financial disaster. Every day, including today, we call and report. The lack of action thunders.

In other areas, Bedouin flocks are barred from grazing lands, and/or attacked.
On those second tablets Moses receives, just as on the first set, we are commanded, “You shall not steal” , and “You shall not covet…anything that is your fellow’s” There are of course those will interpret “fellow” as “fellow Jew.” They may say they are not stealing because nothing can belong to non-Jews in the Land of Israel, or cite this week’s Torah portion’s prohibition against making a covenant with the nations that God will drive out of the Land. The fact is that our Talmudic sages taught that those nations no longer exist, explicitly stated that non-Jews have property rights in the Land of Israel, and taught that it is forbidden to steal from them. The second chance we are given is predicated upon us doing a better job of respecting God’s commandments.

We will read Ezekiel’s vision a second time on Israel’s Independence Day. Just as we were restored to life by the exodus, and God assures Ezekiel that we will return from Babylonian exile, the survivors of 2000 years of diaspora and the holocaust, found new life with the creation of Israel. Everybody has their own definition of what national renewal means. I don’t believe that trampling on the Ten Commandments and despising international law qualifies.

The Song of Songs one of the most controversial books in the Tanakh. Some read it as erotic love poetry, but our sages read it as an allegory of love between God and the people of Israel, thus making it appropriate when celebrating God’s liberating us from Egypt. There is something elusive between the lovers in the Song of Songs. There is much longing and much searching. For example, “I opened the door for my beloved, but my beloved had turned and gone.” Midrash Lekakh Tov (Tobias Ben Eliever-11th Century) explains, “Many times Israel created an opening to return (to God) and assumed that they were redeemed….But the end (of the waiting for redemption) was drawn out because, although the prophets did their best to call to Israel, they (Israel) did not hear. So Israel calls in the Diaspora, and are not answered.

Many assume that we are bringing about our redemption because we have returned to the Land of Israel, and are now doing our best to establish our control over all of it. We are opening the door. But, I believe this is a false assumption. How can be opening the door to God, when we are trampling on the Ten Commandments –when we are not listening to what God is trying to tell us? We do not open the door to God and redemption when we slam it on other human beings because, to truly unite with God, we need to unite with God’s presence in every human being. That means treating them justly, fairly and respectfully, and perhaps lovingly.

O you, who linger in the garden,
The companions hearken for your voice
Let me hear it. (Son of Songs 8:13)

We who are in God’s Garden, the Land of Israel, must realize that God will hear the voice of our love, when our fellow human beings hear it.