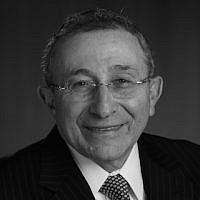 The Blogs
Marvin Hier
Apply for a Blog
Advertisement
Please note that the posts on The Blogs are contributed by third parties. The opinions, facts and any media content in them are presented solely by the authors, and neither The Times of Israel nor its partners assume any responsibility for them. Please contact us in case of abuse. In case of abuse,
Report this post. 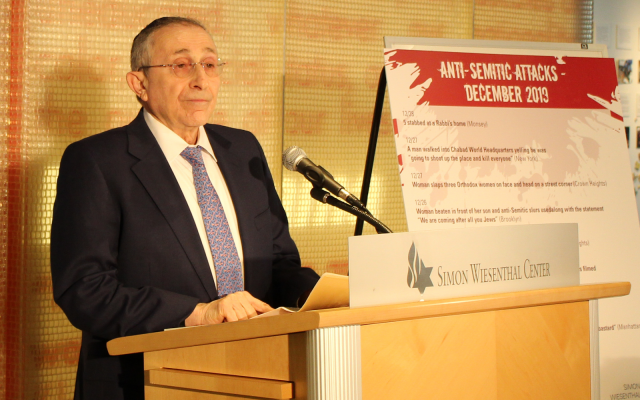 On September 16, 1919, a returning German soldier from World War I wrote a letter about Jews in which he said “the value of an individual is no longer determined by his character or by the importance of his achievements, but by the amount of his possessions, his money…in a democracy he courts the favor of the masses, crawls before the majesty of the people, yet knows only the majesty of money.” By these words, Adolf Hitler, a virtual nobody, made his entrance into the world.

Anti-Semitism never starts with a bang; rather, it creeps up on a society that pays little attention to it until it is too late. That’s the way it all began in Nazi Germany. Small isolated attacks, every day, on ordinary Jews, sometimes shattering the glass of a store, painting a swastika on an apartment house. The world was too consumed with its own affairs to react. When they finally caught on, it was simply too late. As the Torah reminds us, “and a new king [rose up in Egypt] who knew not Joseph,” who forgot the man who saved Egypt and its economy.

We are all astonished by what is happening today in America. Where have we been in the last 20 years, while all of Europe has been afflicted by the vicious plague of anti-Semitism? Look at what almost happened in the UK with Jeremy Corbyn. Even Hitler would be shocked if he learned that today no Jew was safe in Paris, or Rome, or Berlin, or anywhere else on the European continent. So why were we so complacent as to imagine that anti-Semitism could never cross the Atlantic? Well, we were wrong. Anti-Semitism is everywhere in America.

From the Los Angeles Junior Kings Youth Hockey team caught on video making Nazi salutes, to high school students at a party in Southern California standing around red drinking cups arranged in the shape of a swastika giving the Nazi salute, to the vicious attacks in New York City, the capital of the Diaspora, where Jews are assaulted almost every day. Yes, even after the horrific attack in Monsey, it only took a few hours for new attacks to take place in a subway station on Grand Central, on an MTA bus, and on the street in Williamsburg.

So why is this happening? It is happening because there is a double standard in the way Jews are treated by the international community. It is a fact that there is no BDS movement against the terrorist organizations of Hamas, Hezbollah, or the Holocaust-denying state of Iran. Only Jews, Judaism and the Jewish state are vilified. Hitler would be thrilled to hear that in the house of Washington and Lincoln, a US congresswoman used his language, saying, “It’s all about the Benjamins, baby!”

Tragically, many churches, media, academia, instead of defending us, often lead the charge, thereby mainstreaming anti-Semitism. And unlike the 1930s, when it took weeks or months to sell a lie about Jews, now, with a post or tweet, you can reach millions around the world in seconds. Even more dangerous than all of the above is that in today’s world, the far-right, the extreme left, Islamists, are all prepared to put aside their own differences in order to march together under the banner: Let’s be rid of the Jews.

Therefore, we must acknowledge that we are facing an epidemic of hate and anti-Semitism. Time is of the essence. What we need is a special FBI task force to take charge of this plague. It is too risky to have so many well-intending police agencies, mayors, and governors with so many other important agendas to attempt to lead these investigations. The haters need to know the task force will be as committed in apprehending them as they are in carrying out their attacks.

Finally, the American Jewish community, Orthodox, Conservative, Reform, and secular, despite our political and religious differences, are all united in defeating the scourge of anti-Semitism, whatever it takes and wherever it leads us. We have faced this threat for 3,500 years, yet we are still here.

Simon Wiesenthal, an architect by profession, lost 89 members of his family in the Holocaust. When the war ended and he saw that few were concerned with apprehending Nazi war criminals, he assumed the responsibility of avenging the deaths of his six million brothers and sisters. When he reached 90 years old, he had a strange request: to arrange a birthday party in Hitler’s favorite hotel, the Imperial, in Vienna. He insisted that a Jewish band perform. So, on the night of the party, with 400 prominent Jews from around the world attending, the band played “My Shtetl Belz.” Simon then got up and said the following, “You’re all wondering why I asked to celebrate my birthday where Hitler and Himmler had permanent suites and after the war hoped this would be one of their official residences. The answer is very simple. I want the anti-Semites and neo-Nazis to know that Hitler and Himmler are gone, but even here, in their favorite hotel, we Jews are still here singing and dancing, and so it shall ever be!”