I once offended a city council-woman when she asked me if my children lived in the city. I said, “No. My girls live in the Tel Aviv area and my son lives in Pisgat Zeev.” “That is Jerusalem,” she responded indignantly. Of course, I knew that it was officially a suburb of Jerusalem. However, having to pass through several Arab villages to get there had made me forget. I always feel that I am leaving the city when I visit my grandchildren there.

Technically, the claim can be made that Jerusalem from Pisgat Zeev and Ramot to Gilo in the south is one city. In reality, it is not. It is nearly fifty years since Jerusalem was united, in the sense that it all came under Israel’s political authority. However, Jerusalem is far from a united city. The issue is not only geography and political boundaries. It is about the people – the residents of this Holy City. Fifty years have passed and the barriers between the different segments of the city’s residents are more imposing than ever. There are whole segments of society whose presence we are aware of only through the media, in waiting rooms or by meaningless encounters on public transport.

Those who celebrate living here – and I am among them – need to acknowledge the problem and to address it. On a national level, politicians argue whether we need one state or two. In Jerusalem, we have to ask if we want this to be one city or more.

Last Thursday night was surprisingly cold. It had been a beautiful summery day and many found themselves without coats when the weather changed. However, the cold did not deter a group of Jews, Muslims and Christians from praying side-by-side at one of the sites outside the walls of the Old City. Nor it did not stop most of them from staying in the city to join the diverse group of citizens and visitors who continue to transform Zion Square every Thursday night. 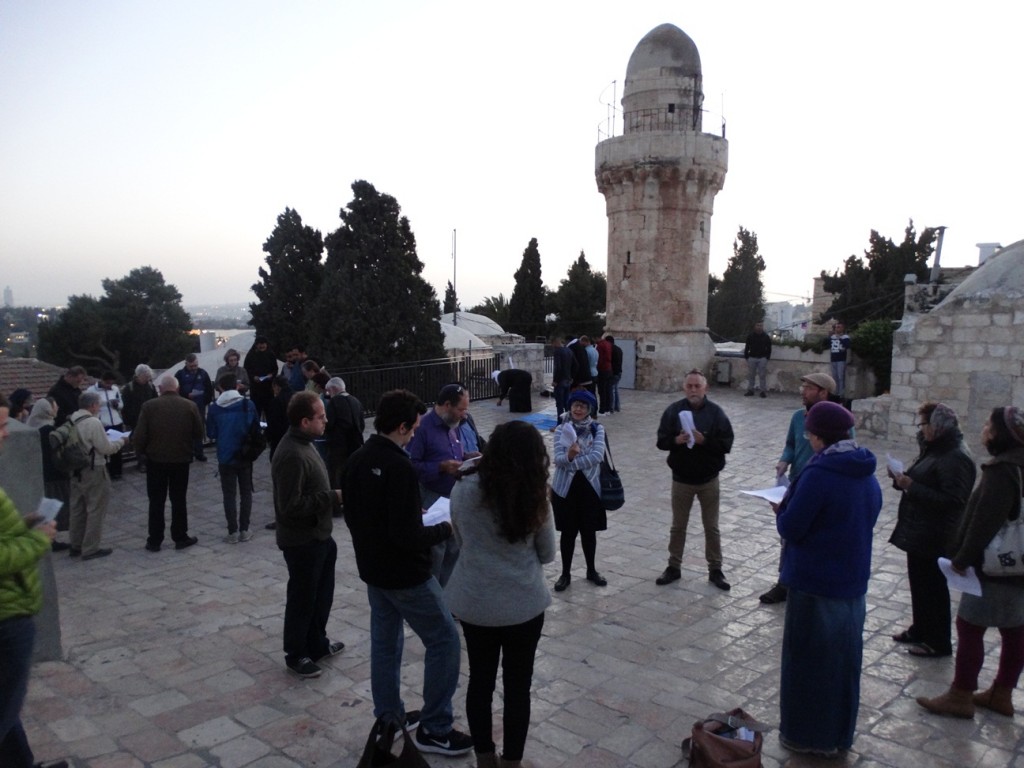 For many of the Christians, the new city, the western part, the almost exclusively Jewish part of  Jerusalem, is completely different from the Jerusalem they inhabit. Christians who spend extended periods in Jerusalem as part of their religious formation or to fulfil pilgrimages, usually stay in Christian sites inside the Old City or in the Eastern part. There is only a small Arab Christian population in Jerusalem and for the most-part they choose to keep a low profile and avoid any form of confrontation.

Similarly, the Muslim population of the city mostly lives separately from the Jewish majority. True, the affluent enjoy Mamilla Mall, the children play in Gan Hapaamon and families can be seen at the Tachana Rishona, all attractive sites for residents and tourists. And the medical system provide first class care for all residents equally. However, making use of these public facilities does not necessarily lead to a proper integration of the different sections of society. It does not mean that Arab young people feel safe and accepted in Jewish Jerusalem. It does not mean that Jewish Jerusalemites mix with their non-Jewish co-residents, even in the few integrated suburbs.

Ben Yehuda Mall and Zion Square at its junction with Jaffa Rd, which is the centre of town for most of us, is another world for many Christians living here. This is simply because their business and daily social interactions don’t extend this far. This is also true for Jerusalem’s Muslim population. In fact, the centre of town similarly holds little attraction for the ultra Orthodox Jewish community.  Haredi neighbourhoods are only metres away but the distance cannot be measured in physical terms.

If Jerusalem is to be one, united city, there is a need to actively create the situation in which its residents   will talk to each other. Thanks to various initiatives, on Thursday nights, Zion Square has become a safe meeting place for Jews of all types and a small number of Muslims to enter into conversations with one another. Last Thursday night, the circle was expanded to include Christians. 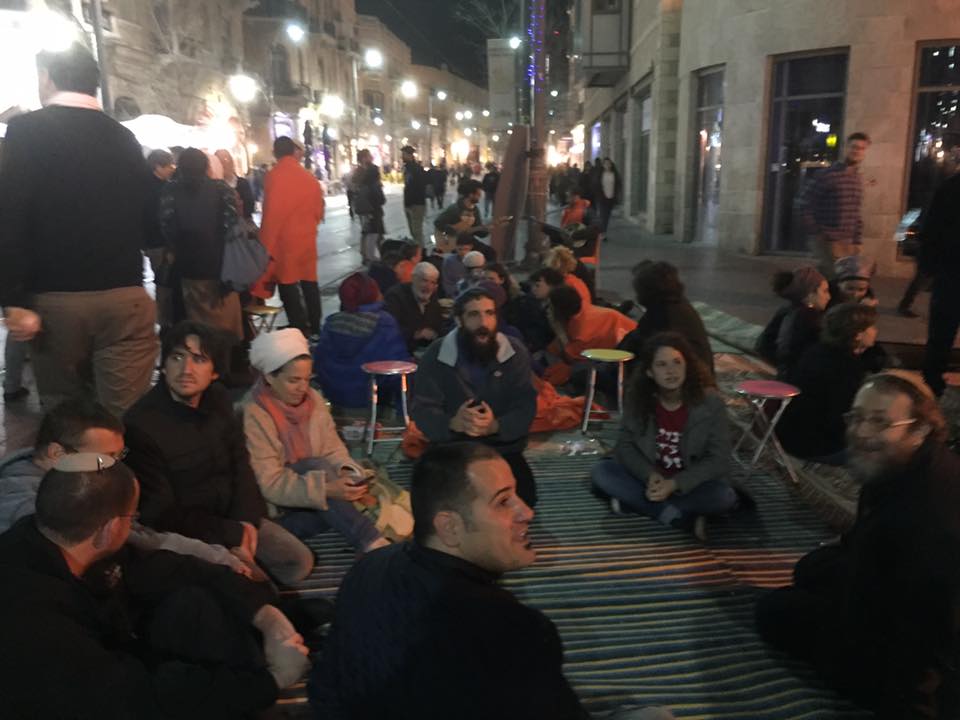 “The Meeting Place”, sponsored by the “Yerushalmit Movement,” was founded in 2015 as a response to the murder of  16-year-old Shira Banki. Concerned citizens organized a public shiva for Shira in Zion Square. Professionally facilitated dialogue circles allowed thousands of people from across the social, political and religious spectrum to meet face-to-face. Throughout the seven days of shiva, Zion Square was transformed from a place of violence and racism to one of reconciliation. When the shiva ended, there was a yearning for more. Ever since, every Thursday night, the Yerushalmit Movement has filled Zion Square with music and dialogue; religious and secular, LGBT and straight, locals and passers-by join together in peaceful dialogue around various controversial issues affecting Israeli society.

They were not the first group there. A group calling themselves “Medabrim BaKikar” (“Speaking in the Square”) was founded in 2014 in response to the activities of extreme right-wing activists, who had begun to publicly promote their agenda in Zion Square on Thursday nights, including harassing Arabs who passed by. The aim of Medabrim BaKikar is not to allow extreme racist views to be aired unchallenged. Participants engage in conversations with those handing out leaflets or carrying banners promoting a racist agenda and challenge them to reassess their position, particularly in terms of the Jewish values by which they purport to be guided. Every week, volunteers put themselves in the uncomfortable position of arguing with extremists who rarely understand the principles of respectful debate. Having dialogue circles in the Square alongside them has provided some comfort and support for these pioneers in changing the face of Jerusalem.

The specific incident which inspired Medabrim BaKikar to invite Christians to join them in the Square last Thursday night took place six months ago. It was obvious that for some Jews, Christians pose a threat. It is clear that many Israelis do not meet Christians. Their only familiarity with them is from the history of Europe or the negative attitude of the Talmud. They have no opportunity to talk to Christians and befriend them. There was a need to grapple with the topic, “Can we be friends?;” specifically, “Can we be friends with people of other faiths without risking our fidelity to our own?”. The Yerushalmit Movement was happy to make this the topic for their dialogue circles.

Christians, Muslims and Jews who had prayed together earlier in the evening did not return home immediately. They came to meet the people in the Square. Luckily, there was no shortage of orange blankets to go around. So, many of us wrapped in blankets,  sat on the mats in circles and introduced ourselves. Unfortunately, language was an issue. None of the Christians who had come spoke Ivrit, so the dialogue was restricted to English-speakers. Fortunately, several Israeli felt confident to participate and there was a group of tourists who joined us. A Muslim couple, a sheikh from Nablus and his wife, who had been at Praying Together, were able to participate. She spoke English. A tri-lingual volunteer made sure that the sheikh was able to follow.

After introductions, I posed the questions, “Can we be friends with people of other faiths? Isn’t his dangerous? Isn’t it also a little ingenuous – after all, don’t we always hold back a little in interfaith friendships?”

My Muslim friend was incensed! Of course you can have deep friendships with people from other faiths! She was passionate. The interchange led one of the young Jewish participants to exclaim that she was overcome with emotion. This was her first genuine interfaith experience. Indeed, none of the participants in the circle was prepared to acknowledge that interreligious friendships can be challenging. Whether or not it is always true, this group felt that difference in religion was not a barrier to a positive relationship.

The conversation flowed. Many of the Jewish participants took the opportunity to ask Christians about their faith and the Christians were delighted to be able to explain their beliefs. The conversation took another turn when we were joined by Megan Phelps-Roper, who had arrived in Israel only a couple of hours earlier. She acknowledged that some Christians continue to vilify Jews but she explained that she personifies those who can have her views changed by a positive, personal encounter through rational and well-informed dialogue. Her presence was a great testimony to the importance of the dialogue in which we were all engaged.

Those who participate in Praying Together in Jerusalem events, held on the last Thursday of every month, have come to feel a deep bond with one another. We develop friendships which are based on mutual respect. Our gatherings comprise of people of prayer – a group who recognize that whatever way we choose to pray, in whatever language and through whatever religious tradition, we are all addressing the same Divine being.  This is unity through diversity. 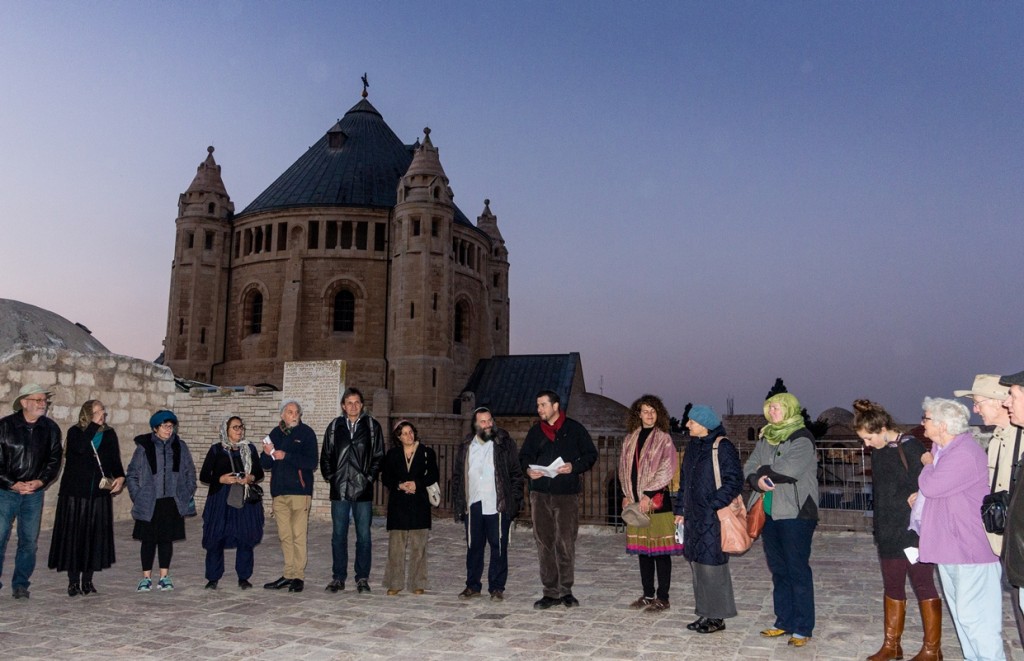 The medium of prayer is one important way to form relationships but it alone will not change Israeli society.  We need to talk to each other.  There is nothing more powerful than an open, honest conversation. And we need to invest time in learning about each other.

The activities of the groups that gather on Thursday nights in Zion Square are contributing to this goal. In two months, we will celebrate the reunification of Jerusalem. Celebrations will be hollow if we only consider the military victory which has led to Jerusalem being totally under Israeli political authority. The real unification of Jerusalem will be when all its residents see themselves as having a common interest in the peaceful future of the world’s most holy city.