Immigrants are under attack again.

In fact, they are so distrusted that they often are not called refugees — which surely they are, fleeing death, terror, starvation, and destitution in the countries into which they were unlucky enough to be born. Often they are not even called immigrants, because that would imply that there is someplace to which they are fleeing, someplace that would take them in.

No place, it seems, wants to be that place.

For some reason, they are often not even called émigrés, a term that surely is correct because they are leaving their homes. Perhaps it sounds too sophisticated, too worldly, too beret-and-Gauloise-at-a-café for the context.

Instead, they are called migrants, as if the state of wandering unwanted from place to place, never again to find a home, will be their permanent condition.

That must be unacceptable to us, both as Jews and as Americans.

We understand that countries that are poor or small or threatened cannot take in many refugees. We know that economies can be threatened by an influx of unskilled and hungry and needy people. We also know that cultures and even societies can be threatened and even overrun by masses of people who do not share their values, and that freedom is a vulnerable condition, easy to overcome.

We understand that it is easy for us to demand that leaders of other countries overlook those very real concerns.

But we also know that as Jews, we have been the wanderers, shoved from country to country, territory to territory, unwanted except when our particular talents, developed in response to our plight, made us temporarily desirable, sometimes as financiers, other times as scapegoats.

We know, moreover, that as Americans we live in a country that is made up of a patchwork of immigrants and emigrants and migrants and refugees. It is unlikely that anyone reading this is descended from native American Indians, and that means that all of us are the descendants of immigrants, people who were offered sanctuary here, or at least were allowed the chance to create it for themselves.

In Europe, refugees running away from horror are being turned away from the very countries that shoved Jews on trains to their deaths three quarters of a century ago.

In Israel, Prime Minister Netanyahu is showing an icy indifference that hurts all of us, in part because it makes Israelis look bad, and in part because hearing such coldness sends chills of pain through us.

Here at home, Donald Trump uses not Middle Eastern but Mexican would-be immigrants as the villains over whom he will triumph; his own good fortune if not active foresight in having been born into a wealthy family conveniently overlooked as he kicks people who already are down.

We do not pretend to know how to deal with the migrant crisis, but we do know that our hearts break for them, and our tradition teaches us not to dismiss them. In the abstract, it is wrong; in very concrete terms, it has not been so long since they were us. 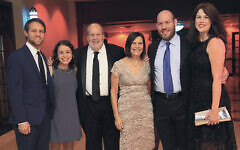