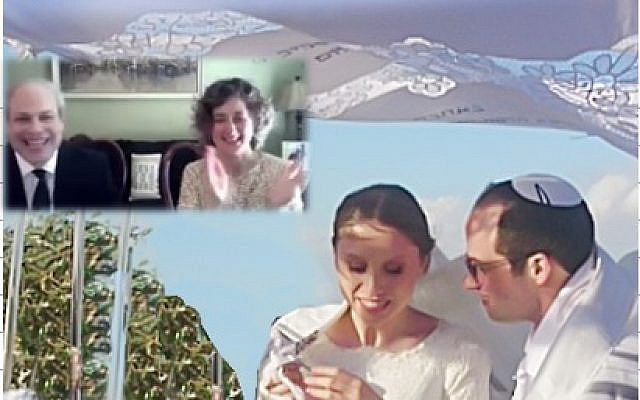 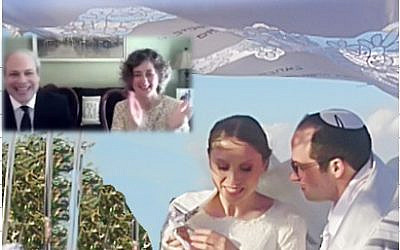 Why am I writing about weddings during the three weeks? How odd.

Because right now my friends -parents of the children with Nachamu scheduled weddings are getting on airplanes, flying into Israel’s “second wave” and going into quarantine.

Because right now my friends – parents of the children who postponed their May weddings  to August are once again changing venues, cutting guest lists and scrambling to create a Simcha.

Because right now I can’t stop thinking about the wedding that I made but I wasn’t physically at.

Because there have been so many thoughts that I have wanted to share.

But the moment wasn’t right until Now.

So here it goes.

My son was married on May 24th in Israel.  And I wasn’t there.

Neither set of parents were there. The Kallah is from Canada; the Chattan from America.  Borders between the two countries were closed.  The only place that our children, recent olim, could be together was in Israel. The Kallah’s parents couldn’t get to Israel because all flights from Canada were shutdown.  I had no passport (a long story). The young couple had been dating for four years.  Four weeks before the wedding a difficult decision had to be made. After a while there was clarity. The original date was to be kept – there would be a virtual wedding for us, but a real simcha for all.

I learned that after creation G-d not only became a matchmaker but a wedding planner as well.  I learned that even when G-d plans, man sometimes needs to laugh.  For G-d may allow rain to fall in May, a heatwave to turn into a winter chill and the wedding ring to be lost on the eve of the wedding.  But G-d lets those small items go because He is so busy planning what really matters.  Angels had to be sent to set up the perfect wedding venue; to get permission for the Mesader Kiddushim – the Chattan’s brother, to travel from America; and to figure out how the fathers’ watching virtually could actually sing their children down the aisle.  All this was done the week of the wedding.  And on the day of the wedding, the Wedding Planner, of course, was in attendance, revealing himself in the winds billowing the Chuppah and in the still silence of the mountains of Jerusalem in which the wedding took place.

I learned that there are no guests at the weddings of 2020. Everyone who attends is the Baal Simcha -the wedding maker, the mood creator and the carrier of joy.  Each family member, each friend in attendance, understands that happiness doesn’t simply happen. It is a vibe created by investing in the moment with all your heart.  And from whom did these Baalei Simcha learn from? None other than the Wedding Planner himself, shtick master par excellence who knew that sasson and simcha needed to be created before the Chattan v’Kallah showed up.

For, Asher Bara Sasson V’Simcha  Chattan V’Kallah, as these words infer, not only did G-d create the match but also the gladness and joy that preceded it.

I learned that a simcha can’t be celebrated alone in your study watching your children get married on zoom. But simcha, true simcha, can be felt when the community that helped raise your child waits outside your doorstep ready to sing and dance with you.  True simcha, which transcends any physical distance, can be so deeply felt when your children get married under the Chuppah you crafted for them as a symbol of the warmth and protection of their childhood homes. True simcha can be felt, when under that Chuppah, they grab each other’s hands, joining together -not wanting to let go.

So why am I writing about weddings during the Three Weeks?

Because what I learned from our wedding of 2020 is so relevant to now.

What is it that powerfully breaks through the silent isolation of Jeremiah’s Jerusalem? In the words of Jeremiah, Od Yishama b’Arei Yehuda Uv’chutzot Yerushalayim.  It is not in the joyous cacophony of a four hundred person wedding (like we had planned) but in the anticipation of singular voices

welling up and echoing through the hills of Jerusalem

getting louder and louder as their voices are joined with the harmonies of generations past,

of hopes for their beautiful future and

the niggun the Wedding Planner hums to himself after a job well done.

So comfort, comfort to our People and Siman Tov and Mazal Tov to all.

About the Author
Ariella Nadel is a TaNaKh teacher at Farber Hebrew Day School - Yeshivat Akiva in Southfield, Michigan and a longtime community educator. Ariella holds degrees in Judaic Studies and Political Science from Yeshiva University and a Law Degree from the Cardozo School of Law.
Related Topics
Related Posts
Comments