There’s no one more smug than a kibbutznik parent in August.

“Oh, lawdy,” she said (or the Hebrew equivalent), holding her hand dramatically to her forehead and fluffing out her hoop skirt at the local playground. “Whatever shall I do with my youngins for a week?!”

After barely eking out a working existence in July with half-day school-run day camp and going through the arduous process of lining up a full-time August babysitter for my six kids, my sympathy for this fellow working mum was limited.

After all, she only had to “deal with the kids” for a week without childcare until the pearly gates of September 1.

And then it hit me.

September 1 is an illusion. It is that mirage that keeps us working sloths motivated. Our summer raison d’etre. But like that thirsty nomad wandering the Negev, there is no real respite today.

Why? Because the first in a string of Jewish holidays is in 10 days. We actually must wait until October 6 for the real “September 1.” 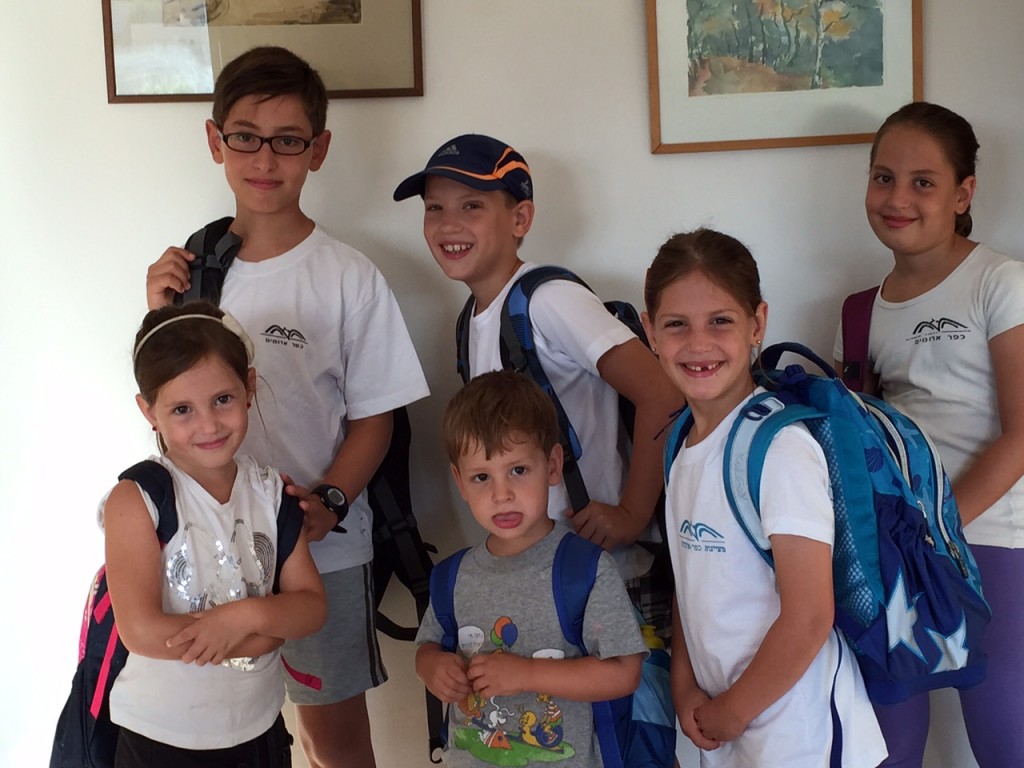 The six Dan kids are all dressed up and ready to start the school year, at least for the next 10 days until the first of a string of Jewish holidays. (Amanda Borschel-Dan/The Times of Israel)

At 67, the State of Israel is that archetypical old bachelor with gold chains on its hairy chest playing the field. It still won’t commit to the Gregorian calendar used in most professional life, or the Hebrew calendar which actually rules our lives.

But it’s time to put a ring on it, Jewish state.

You and I both know you’ve got a good thing going with the Hebrew calendar. You’ve raised kids together and marked their development according to her every beck and call. You stop the world for her.

We even work on Sundays for her!

So stop pretending this is a hot-button issue about the separation of synagogue and state. That ship has sailed.

This is about facing reality. This is about quality of life for the fleets of working parents out there who can’t afford Mary Poppins or luck into Nanny McPhee.

Take for example my secular Jewish household, with two working parents (who feel very blessed with our professions, thanks boss!), but do not have the luxury of two months’ vacation days. (By the way, all the teachers I’ve spoken with also think two months is way too long.)

But add on the immutable multitude of Jewish holidays and their surrounding “bridges” for long weekends, the mysterious “isru chag” recovery day (even after a one-day feast) the week or two before Passover, and the national holidays, and our vacation days are only a fraction of what we need.

However, this downward spiral of working parents limping through August only to slip into the September/October holiday black hole could easily be averted.

Why not begin the school year AFTER Sukkot, the last of the fall religious holidays, and absorb all of these feasts (and famines of childcare) into the summer vacation?

There is precedent: the academic terms for Israeli universities and colleges already begin a week after the end of Sukkot. And of course the ultra-Orthodox yeshiva systems set their years to the beat of the Hebrew man.

I am of course aware of the counter-arguments: That children need to learn about the holidays in school. (I say, make it part of the summer day camp curriculum.) That it is too hot for students to learn in July and August. (My kids complain the air conditioning is too cold in their classrooms.) And that children are needed to work on the farm. (That actually may have been from my Indiana years.)

A spokesperson for Education Minister Naftali Bennett did not reply to my query this week on the feasibility of such a calendar shift. Perhaps she was busy dealing with the annual last-minute strike threats from the teachers union.

Maybe she just thought this radical idea of accommodating working parents and, by the way, probably helping out the economy, is shtuyiot b’mitz agvaniyot (nonsense in tomato juice).

But when I raised the plan on the local playground recently, I was called a genius, and — I write modestly — nominated for prime minister.

So fiddledeedee September 1. I’ll celebrate the start of the school year for real on October 6.