You can never tell what you’ll find on Facebook, I often think of it as a virtual bazaar or a giant T.J.  Maxx  store. It offers an array of unrelated, mostly irrelevant, information. However,  there is always a chance to  find a real  gem.

The  painter Zoya Obianuju Cherkassky-Nnadi is such a gem. I was first introduced to her when someone shared on my wall several paintings from her series “Aliya 91.” Those paintings realistically depict scenes from the new reality of the Russian immigrants who came to Israel in the early 90s (the young Zoya and her family were among them). The paintings were clever, funny and insightful.

Looking at the one devoted to the Russian culture week in Ashdod, I found myself laughing out loud even though it wasn’t really funny.

The painting portrays an empty room at a community center, there are several rows of vacant white plastic chairs, and the only audience consists of two elderly ladies sitting at the far end of the second row. They intently, perhaps even critically watch the performance of a bearded guitarist and a dramatic singer dressed in colorful, somewhat eccentric, attire. Next to the singer,  two severe looking people: a woman and a man, are awaiting their turn, and beside them sits a dejected looking old man who wait to  show his special talent.

There are no Israelis in sight but the banner behind announces in Hebrew: “Welcome to the Russian Culture week in Ashdod.”

This painting is a typical example of  how Zoya works, she paints what she observes–a slice of life, but there is always much more. Examining her paintings we become aware of the subtext– the complete life story behind it.  Zoya is interested in people and her choice of what to present, in seemingly simple scenes, is almost symbolic and conveys subtle criticism. Personally I consider her, and her social commentary, to be a contemporary rendition of the familiar Italian Neo Realists.

The scene presented  in the  “Russian Culture week” is a Chekhovian fall from grace: the artists and the audience are alienated from their new environment. In spite of the Hebrew banner, they have no contact with Israelis.  In the past they were used to more respectable circumstances, but now they have to contend with a new humble and unsatisfactory reality. But they do not compromise, formally, stiffly, and even snobbishly they go on performing . Still we have to admire their commitment to art, and in a way the painting also communicates optimism and strength.

Zoya who was born in 1976 has been painting all her life, she goes about life constantly documenting and commenting. She keeps a pictorial diary of everything she sees. She is incredible fast, and it takes her only moments to breathe life into a scene .Some of those etudes are later developed into larger paintings, and others wait their turn in her files.

A short time ago Zoya shared on Facebook a small etude of a destitute black man sitting on a bed in a bare room. The title of the painting was “The Widower.” .It was obvious that Zoya empathized with his plight, but what made the work even stronger was an aesthetic choice.  On the wall next to him  Zoya placed a cross, thus adding a symbolic dimension to his suffering.

Zoya paints what she observes,  but regardless of the subject matter through her critical eye, her sense of humor and her compassion, she manages to transform local life stories and make them universal and relevant to all. 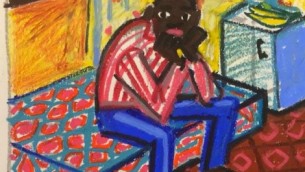 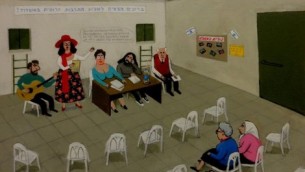 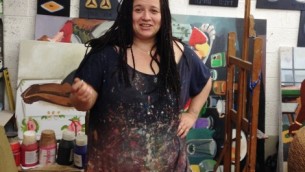